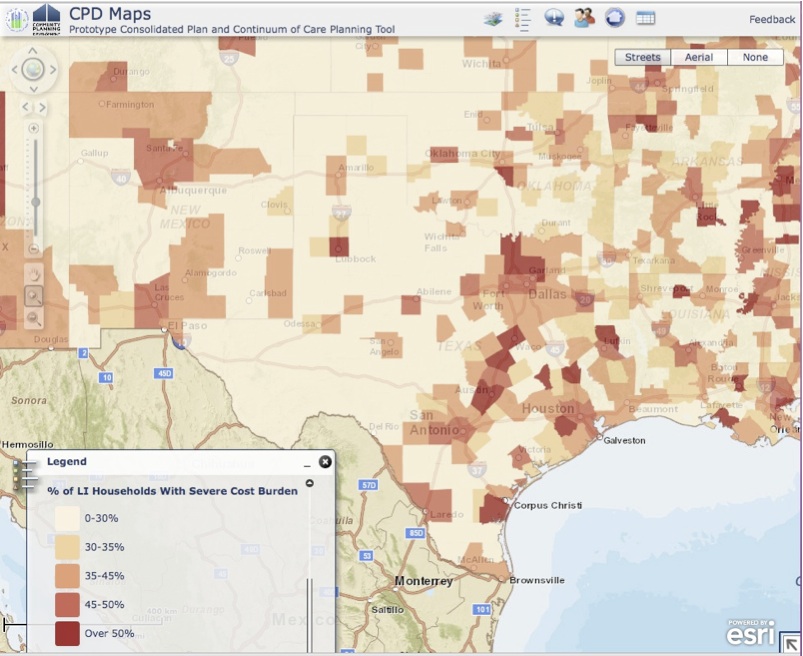 You have to hand it to the CPD staff of HUD. They are doing some really interesting and useful things these days to make HUD funds more effective.

For example, HUD officials recently demonstrated the capabilities of a new GIS on-line mapping tool for community groups and government officials in the Rio Grande Valley. It is a huge improvement over previous HUD efforts, put in place by then HUD Secretary Andrew Cuomo in the mid-1990s which never quite lived up to Cuomo’s enthusiastic evangelism.

You can try the new GIS system out at: http://egis.hud.gov/cpdmaps/

Called HUD CPD Maps, the tool is a prototype Consolidated Plan and Continuum of Care planning tool based on an ESRI ARC GIS Online platform. It can be very slow at times in its current prototype configuration, but HUD officials told us that would be remedied by the time the system is formally launched.

What makes the tool both intriguing and frustrating are the HUD datasets it makes available.. Users can select an area and create a map of census tracts based on housing needs, housing supply, economic conditions and homeless populations (all as defined by HUD). It also allows rudimentary mapping of some basic demographic data. The system also (sort of) permits mapping of CDBG, HOME, ESG and other expenditures.

HUD makes some data sets available that can produce maps of Section 8 voucher holder concentration, public and assisted housing locations and so on.

I have three main complaints about what is a tool with great potential.

First, the HUD CDBG and HOME project data is only for recent projects and only maps points, not areas served. HUD needs to get more specific about the areas served and also needs to give us at least ten years of data if we are going to engage in real planning. Planning involves understanding patterns provision of historical grant funding — particularly in considering fair housing and civil rights implications.

Second, data quality needs improvement. THUD CPD Maps lacks detailed data to allow understanding of the nature of HUD activities. For example, HUD has available within its headquarters databases that provide rich detail on assisted apartment properties but only very rudimentary data is provided through the mapping system. I’d like to know occupancy rates for HUD assisted properties, not just public housing. I’d also like to see data on bedroom mix. The data for Low Income Housing Tax Credit properties consists of only a point on a map and many projects are missing completely. In Texas we have rich data available on LIHTC projects, but there is no way to upload user data files or shapefiles (colonias for instance) into the HUD GIS system.

Third, the available demographic data is way too limited. HUD GIS Maps does have housing cost burden down to the census block level, which I told HUD officials demonstrating the system makes me tingle with excitement. But users are not cautioned about the statistical reliability of the block level data that I understand is culled from ACS.

The truth of the matter is that I am spoiled by using another ESRI product, Community Analyst. The datasets in Community Analyst make HUD CPD Maps look really weak. Those datasets allow for real community insight and planning to take place.

HUD has never really figured out who their audience is for a GIS system. I used to listen to (and generally be annoyed by) then HUD Secretary Cuomo talk about how his GIS system was all things to all audiences. In his vision poor people were going to get on the system to better understand and make the case for their community needs and local government planners were going to use it as a serious planning tool. What HUD produced was not adequate for either purpose because they spent too much time and money playing around with the software and not concentrating on the data.

HUD needed to let private industry evolve a usable interface for a GIS system and concentrate instead on getting their data into shape. ESRI has produced a professional level GIS product that can be used by people who have not had GIS training in Community Analyst.

My suggestion is that HUD undertake a crash effort to assign service area geographies to the grant projects it has funded over the past decades and make those available, get someone to link the existing rich HUD property databases to the GIS property inventories and find some way to license Community Analyst as the platform for HUD’s housing and community development planning initiative.

That would do more to increase the quality of planning and decision-making around the multi billion dollar HUD program budget than any other action that could be taken.

It would accomplish what HUD has struggled to do since the mid-1990’s, empower both the poor to advocate their community needs and government officials to plan how to efficiently meet those needs.