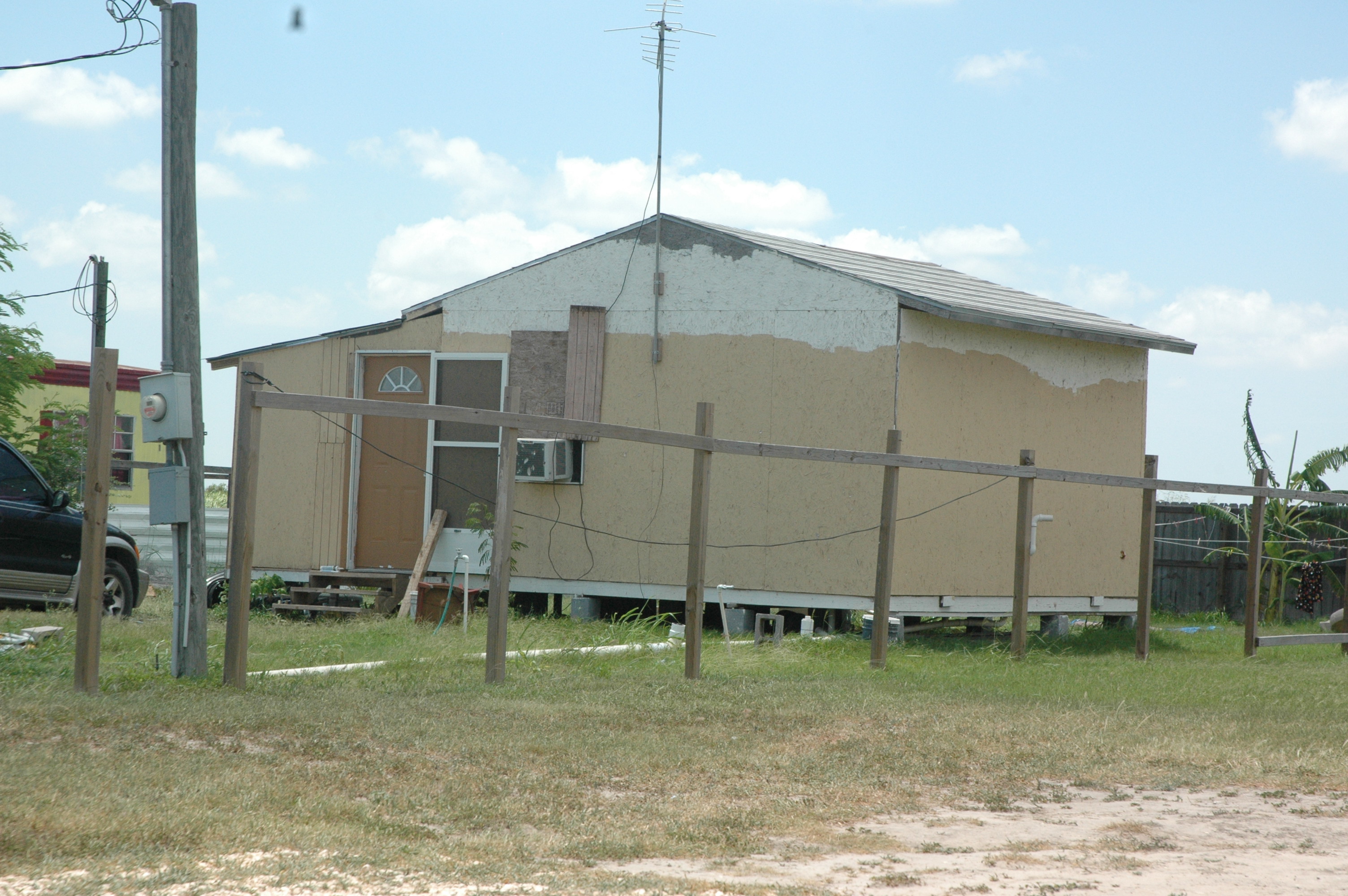 Channel Five in McAllen ran a story tonight on a resident of a colonia in Cameron County who was dreading the approach of Tropical Storm Don. The subject of the story lives in Green Valley Farms (not Green Acres as the story claims). It is a colonia that has attracted our attention of late because it may have suffered the worst flooding under Hurricane Dolly but has yet to secure the help the residents need.

You can read the story below or watch the video (link at end of this post) to get an idea of what it is like to be poor and live in a colonia that floods after every major rain.

Green Valley Farms is former agricultural land that is lower than the surrounding countryside. So the water drains into the area with every rain and stands until it evaporates or soaks into the ground. That can take weeks after major storms like Hurricane Dolly. The colonia is huge in size and relatively sparsely populated with about 800 people. The residents are largely poor and the housing conditions are generally really bad.

Cameron County has proposed a drainage infrastructure project costing about $8 million in CDBG disaster recovery funds earmarked by Congress to help the victims of Hurricane Dolly. One part of that project involves widening a drainage ditch from 10 feet to fifty feet to help carry storm water out of the City of San Benito.  That city lies immediately west of Green Valley Farms.

Since this project is covered by the conciliation agreement between TxLIHIS, Texas Appleseed and the State of Texas the project came before us to review for compliance with fair housing laws.

We studied the project in detail and found it would be compliant only if the County undertook efforts to address the flooding in Green Valley Farms at the same time it widened the drainage ditch that runs through the colonia. There has been a long and tragic history of the poorest Valley residents, those who live in colonias, getting shortchanged in the provision of public infrastructure. The quality of infrastructure is dramatically better in the cities and is often financed with federal grants that are supposed to be used to help the poor. Those grants are typically hijacked by local politicians for urban residents who are better off financially.

That is where things stand tonight as Tropical Storm Don bears down on the Rio Grande Valley.

I urge you to watch the video or read the story below and imagine what it would be like to be poor, living with a severe disability, living in the Green Valley Farms colonia and watching the rain begin to fall. One local official expressed it nicely, “We hope for a time when colonia residents can look at rain as a blessing instead of a curse.”

Those who live in some of the Valley’s poorest communities are worried. Severe weather is a major threat when you don’t have dependable shelter.

Felix Hernandez lives in a Cameron County colonia, an area known as Green Acres. It usually suffers the brunt of major storms. The threat of severe weather is a concern there Friday night. It’s also a reminder of the people’s constant struggle.

Hernandez’s home is made of scraps, leftover pieces of wood he has collected from odd jobs. He has had to make repairs many times.

“And you have to start again. You nail what little you have,” says Hernandez.

Reminders of the damage heavy rains and high winds can cause surround Hernandez. He says homes that sit right beside his property have been abandoned for years. He says he remembers Hurricane Dolly like it was yesterday. It brought a lot of damage.

This husband and father knows his efforts are not enough to protect his family.

“Later we will see if they open a shelter,” says Hernandez.

“I find a way to save them. I take them out to higher ground. There’s a canal over there so they don’t drown,” says Hernandez.

One of his efforts to protect from the rain is right under his feet. Used roofing shingles cover his land.

“If I don’t have this, my crutches will sink in and I can’t walk,” says Hernandez.

He lost his leg in an accident years ago.

“There isn’t much work for someone like me,” says Hernandez.

Hernandez lives in poverty on land he inherited from his immigrant parents. The land is prone to flooding, so threats of severe storms are more than scary for Hernandez and his family. They are a reminder of all he doesn’t have.

Hernandez says he knows there are many areas in the Valley that flood when storms hit. He and others like him have few options. He says nobody would want to buy the land he lives on because it is flood prone. He can’t get a new home without selling the land. It’s a never-ending cycle.