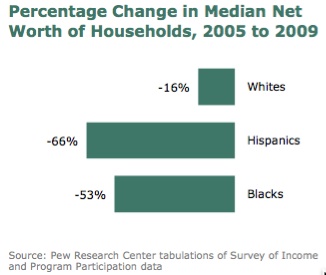 Most everyone is aware of the long-time “wealth gap” between whites vs. Hispanics and blacks. A new Pew Research Center study demonstrates there has been an alarming increase in this gap since the onset of the Great Recession.

The median wealth of white households is now 20 times that of black households and 18 times that of Hispanic households. These lopsided wealth ratios are the largest since the government began publishing such data a quarter century ago and roughly twice the size of the ratios that had prevailed between these three groups for the two decades before the Great Recession.

From 2005 to 2009, inflation-adjusted median wealth fell by 66% among Hispanic households and 53% among black households, compared with just 16% among white households.

A July 26, 2011 report titled Wealth Gaps Rise to Record Highs Between Whites, Blacks, Hispanics, is the Pew Research Center’s analysis of data from the Survey of Income and Program Participation (SIPP), an economic questionnaire distributed periodically to tens of thousands of households by the U.S. Census Bureau. It is considered the most comprehensive source of data about household wealth in the United States by race and ethnicity. The two most recent administrations of SIPP that focused on household wealth were in 2005 and 2009.

The major contributor of the growing wealth gap is the erosion of home equity.

Minority households experienced greater losses because they are more dependent on home equity as a source of wealth. Housing values started to fall sooner than stock prices and, unlike the stock market, the housing market has not begun to recover.

The impact of housing on the asset decline of minorities is striking. Median net worth exclusive of home equity decreased only $479 for Hispanics and $626 for blacks. With housing included, their losses were $12,034 and $6,447, respectively.

Hispanics: The net worth of Hispanic households decreased from $18,359 in 2005 to $6,325 in 2009. The percentage drop—66%—was the largest among all groups. Hispanics derived nearly two-thirds of their net worth in 2005 from home equity. Their net worth also diminished because of a 42% rise in median levels of debt they carried in the form of unsecured liabilities (credit card debt, education loans, etc.).

Blacks: The net worth of black households fell from $12,124 in 2005 to $5,677 in 2009, a decline of 53%. Like Hispanics, black households drew a large share (59%) of their net worth from home equity in 2005. Thus, the housing downturn had a strong impact on their net worth. Blacks also took on more unsecured debt during the economic downturn, with the median level rising by 27%.

Whites: The drop in the wealth of white households was modest in comparison, falling 16% from $134,992 in 2005 to $113,149 in 2009. White households were also affected by the housing crisis. But home equity accounts for relatively less of their total net worth (44% in 2005), and that served to lessen the impact of the housing bust. Median levels of unsecured debt among whites rose by 32%.