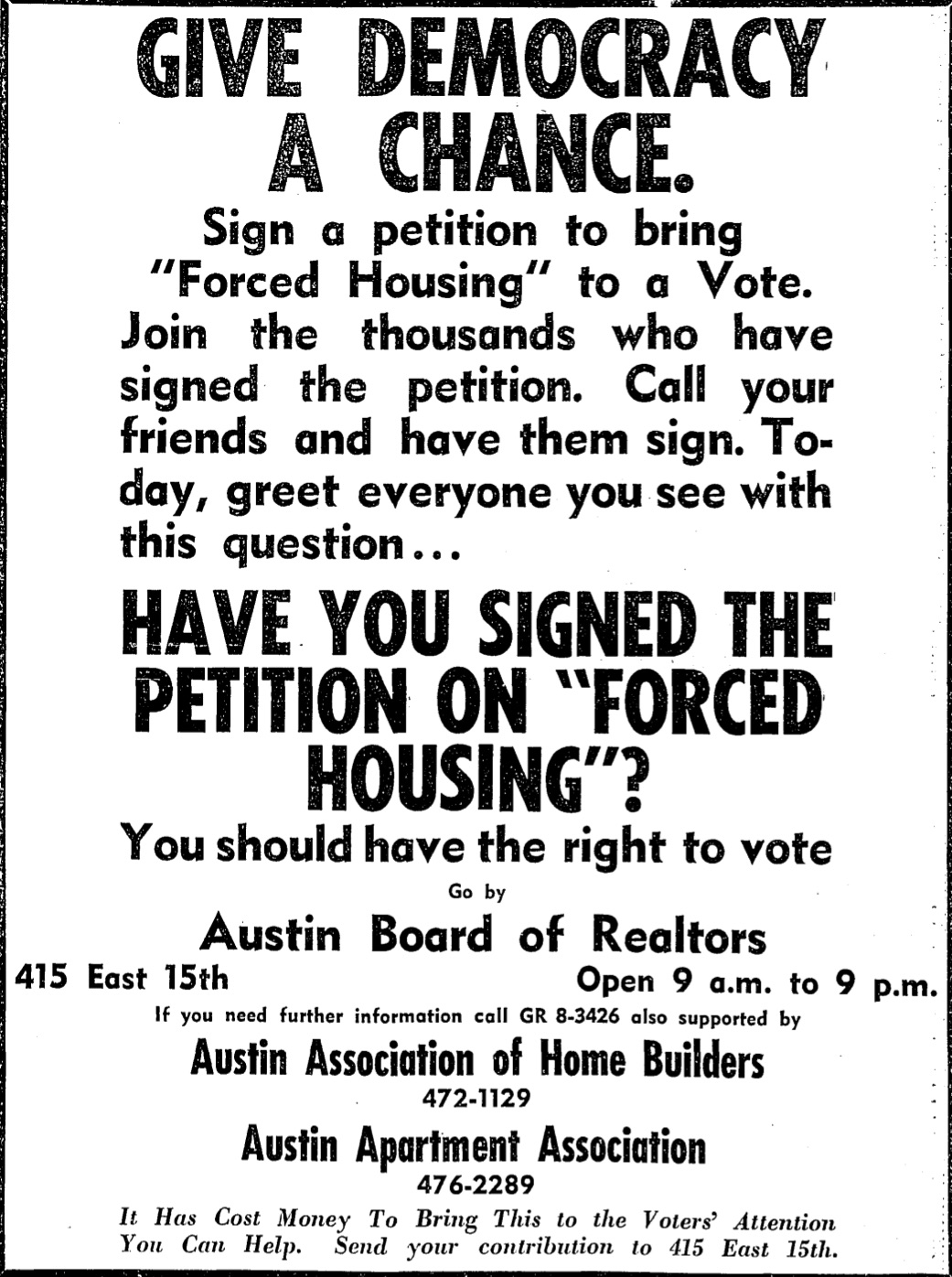 In a column today in the Austin American-Statesman, our co-director John Henneberger highlights how little the opposition to fair housing in Austin has changed since the Civil Rights era. Back in 1968, the Austin Apartment Association and other realty groups led a campaign to overturn a city ordinance, passed in accordance with LBJ’s Fair Housing Act, that banned racial discrimination in renting and home ownership. Today, in response to a new city ordinance that bans discrimination based on the source of a renter’s income, the AAA is leading both a lawsuit against the City of Austin and an effort in the state legislature to stop any Texas city from enacting source of income protection.

Opposition to fair housing still carries the racial connotations that it did in 1968: 90 percent of Austin renters who use Section 8 Housing Choice Vouchers, the group the ordinance is meant to protect, are people of color. Ninety-one percent of Austin landlords refuse to rent to these voucher holders. And the rhetoric that the AAA used almost 50 years ago is alarmingly similar to what they’re saying now – the insistence that this is all about “property rights;” that race has nothing to do with their opposition to anti-discrimination laws.

You can read the full column online. Below, we’ve collected some images from the fight over fair housing in 1968, that show what the landlords thought back then – and what a relic of the past their opposition truly is.

(All images are from the public archives at the Austin History Center.)

In 1968 the landlord associations’ buzzword was “forced housing” – though the ordinance would not have forced anyone into anyone’s property.

“This is not a racial thing,” fair housing opponents claimed in the fall of 1968, just before a public referendum overturned Austin’s ordinance. Instead, they proclaimed that anti-discrimination laws were the work of “communists” and that an ordinance that made sure someone couldn’t be unjustly denied a home on the basis of their race “will not provide a home for anybody.”

In the AAA’s current statement on source of income protection, association president Robbie Robinson claims that property owners refusing to accept housing vouchers has “nothing to do with the potential residents.” The ordinance, they say, “unreasonably interferes with private property rights.” Thankfully, at the very least, the era of calling people “communists” does seem to have passed.

Above, the landlords rail against City Council members, including Austin’s liberal icon Emma Long, who would “make criminals out of God-fearing, law-abiding, tax-paying homeowners.”  The landlord associations ran advertisement after advertisement throughout the spring, summer and fall of 1968. The vitriolic opposition to the fair housing ordinance made their voices heard in the media, creating so much tension with the City – which ran its own ads in support of fair housing – that three councilmembers including Long lost their jobs the next year from challenges largely bankrolled by the landlord associations.

Prominent realtor Nelson Puett, one of the most active fair housing opponents in 1968, wrote the letter above to offer alternative housing plans “if there is a crying need for more and better housing for minority groups.” His plans include setting aside “one or two homes” for minority families at eight different subdivisions around town. At a time of widespread racial segregation and discrimination against minority renters and homebuyers – much of which remains today – Puett suggested that his plans should only take effect if “a minority person searches for a home on his own and actually can’t find what he wants” (emphasis added).

Tensions flared at more than one City Council meeting. On May 17, after a supporter of segregationist candidate George Wallace declared that the Fair Housing Act would never have passed in the first place were Wallace president, pro-ordinance realtor Sam Dunnam stated that the opposition to fair housing “has a whole lot more racism in it than Puett and others would like to admit.” He called the landlords’ ads about forced housing “deplorable.”

It’s worth pointing at that the 1968 ordinance was a response to both the federal Fair Housing Act and real, documented complaints of racial discrimination against minorities in Austin. In March of 1968, responding to housing managers found “guilty of discrimination,” the City began to move forward on a fair housing ordinance. In 2014, responding to discriminating against renters who use housing vouchers – again, 91 percent of Austin’s landlords refuse to accept voucher holders, 90 percent of whom are people of color – the City moved toward a new ordinance aimed at preventing discrimination.

As today’s Statesman op-ed asks: where is the Austin Apartment Association now? Right where they were in 1968, their out-of-date arguments from back then preserved for history, where they belong.