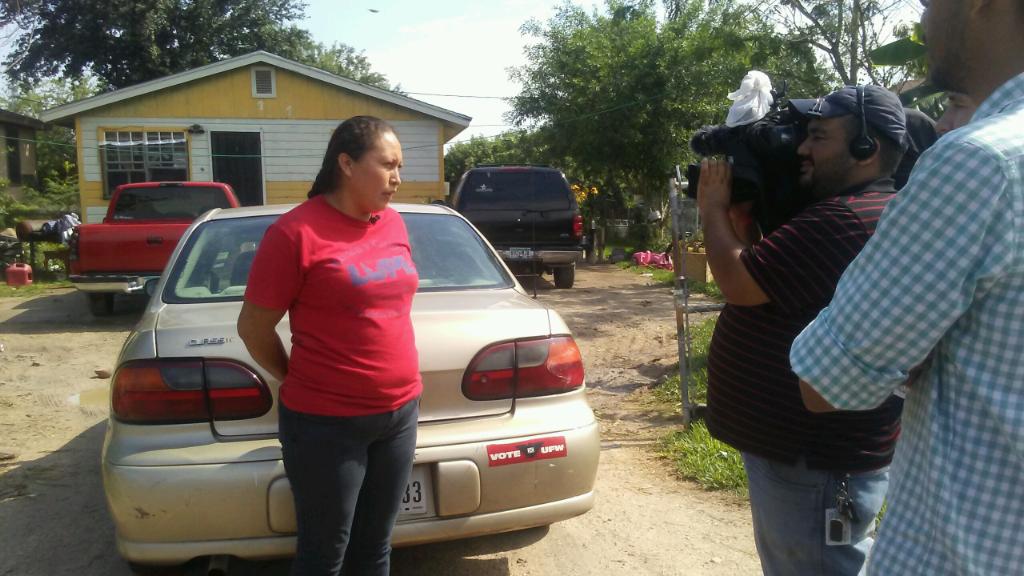 Inequality is most starkly manifested in the differences between rich and poor neighborhoods. And nowhere is inequality greater than in the impoverished colonias outside urban areas in Texas, which often suffer from critical infrastructure issues such as a lack of stormwater drainage that leads to chronic flooding.

But thanks to the power of community organizing, a new drainage project to prevent flooding in six colonias in the Rio Grande Valley is finally underway.

Hidalgo County officials held a groundbreaking ceremony (pictured at left) near the city of Alamo, where the new Alberta Drain system will divert stormwater from six nearby colonias with chronic flooding into the larger Alamo Drain. As the rain came down on May 18, Hidalgo County Urban County Program director Diana Serna promised that the project would be completed by the end of this year.

Without strong advocacy from the community, the project might never have happened at all. It’s funded by the federal Community Development Block Grant-Disaster Recovery Program (CDBG-DR) – funds that the county received in the aftermath of Hurricane Dolly in 2008. The storm devastated many of the region’s 1,500 colonias, where it’s common to see significant street and property flooding even after minor rainstorms, and the worst-affected colonias have suffered from severe flooding in the years since the hurricane.

As the Texas Observer recently reported, the community organizing organizations La Unión del Pueblo Entero (LUPE) and A Resource In Serving Equality (ARISE), our partners in the Valley, are working to bring safe, effective, modern drainage to the colonias. That effort has included persistent testimony reflecting the need to direct CDBG-DR to the areas with the worst flooding. We were proud to work with LUPE and ARISE as they campaigned for the funding to alleviate chronic flooding in the most severely impacted colonias. As a result of their years of advocacy, the county agreed to prioritize DR projects like the Alberta Drain.

The project is a significant victory for LUPE and ARISE, as well as our partners at buildingcommunityWORKSHOP and the Community Development Corporation of Brownsville. They have also persuaded the State of Texas to conduct an ongoing, comprehensive study of drainage problems in the Valley. The results will provide local, state and federal officials with data to determine the extent and cost of updating the infrastructure. Improving the Valley’s drainage is especially critical with a Zika Virus outbreak anticipated in South Texas, as the mosquito-borne disease is much likelier to be transmitted in areas with standing water.

Many of the colonia residents responsible for the new drainage project attended the groundbreaking to celebrate the accomplishment. Agustin Lora, a LUPE member and resident of Colonia El Charro #2, one of the colonias that will benefit from the new system, described previous floods that left his colonia with up to three feet of water and many residents stranded in their homes. “The flooding was so bad last year that some neighbors were evacuated with small boats. Some had no where else to go and decided to stay but the water took around a week to drain,” Mr. Lora said.

Laura Olvera, another LUPE member and Colonia El Charro #2 resident (pictured above speaking with local media after the groundbreaking), voiced her excitement about the new system. “We hope that this drainage project will provide relief so what little we invest in our homes is not ruined because of floods, or for our cars not to suffer damage and most importantly so our families do not get sick with the standing water,” she said. “It took the county some time to begin, after promising time and time again, but this is a start.”