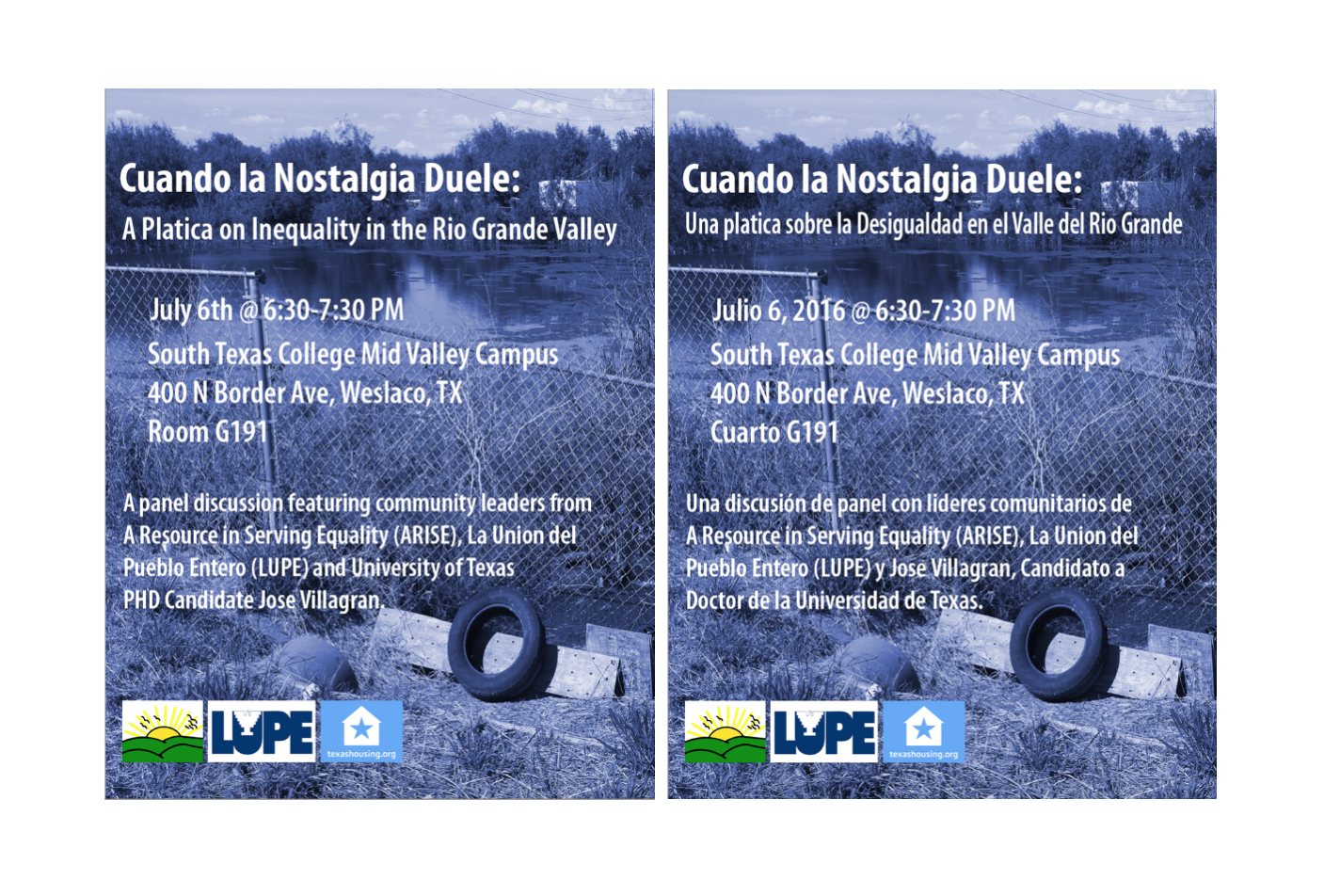 Inequality in the Rio Grande Valley is more extreme than most anywhere in the United States. It is seen in the stark contrast in economic, political, housing and educational opportunities for different classes of Valley residents, and physically manifested in the living conditions in the region’s many impoverished barrios and colonias.

Beginning in July, we will collaborate with our partners at La Unión del Pueblo Entero (LUPE) and A Resource In Serving Equality (ARISE) to host a new series of community forums designed to get at the heart of why this rampant inequality exists and persists. Known as Pláticas, “an expressive cultural form shaped by listening, inquiry, storytelling and storymaking that is akin to a nuanced, multidimensional conversation,” these forums will allow participants to co-construct spaces to explore important issues. The first Plática, “Cuando la Nostalgia Duele” (“When Nostalgia Hurts”), will be held on Wednesday, July 6 at the South Texas College Mid Valley Campus, at 400 North Border Avenue in Weslaco, from 6:30 to 7:30 p.m. The discussion will be conducted in Spanish, with English translation available.

The Pláticas will connect community leaders fighting contemporary issues of inequality, including the members of LUPE and ARISE, with academic or oral experts who can explain the historical origins of oppression in the Rio Grande Valley. The first Plática will feature a presentation from Jose Villagran, a Ph.D. candidate at the University of Texas, and then a panel discussion with Villagran and LUPE and ARISE leaders. Villagran’s presentation will examine how throughout the history of the Valley, from the Texas War of Independence in 1836 until the modern day, factors such as race, gender, and migration have contributed to a massive underclass of Mexican-Americans predominantly composed of exploited laborers living in subpar conditions.

It is vital that these conditions are overcome. The starting point is to provide a political and intellectual framework for people oppressed by prejudice and discrimination to demand that it end. Understanding the historical causes, the ways in which prejudice and discrimination have been adapted and are applied today, is a prerequisite for addressing the extreme poverty and inequality in the region.

Upcoming Pláticas will explore issues of inequality in government, housing and education, including unaccountability and corruption, the lack of public services in colonias, racial deed restrictions and landownership patterns, academic segregation and language division, the status of immigrants and their children and much more.

We hope to see you at the first Plática on July 6, and at future forums. For those who are unable to attend, check back at our website after the event for a video of the presentation and discussion.