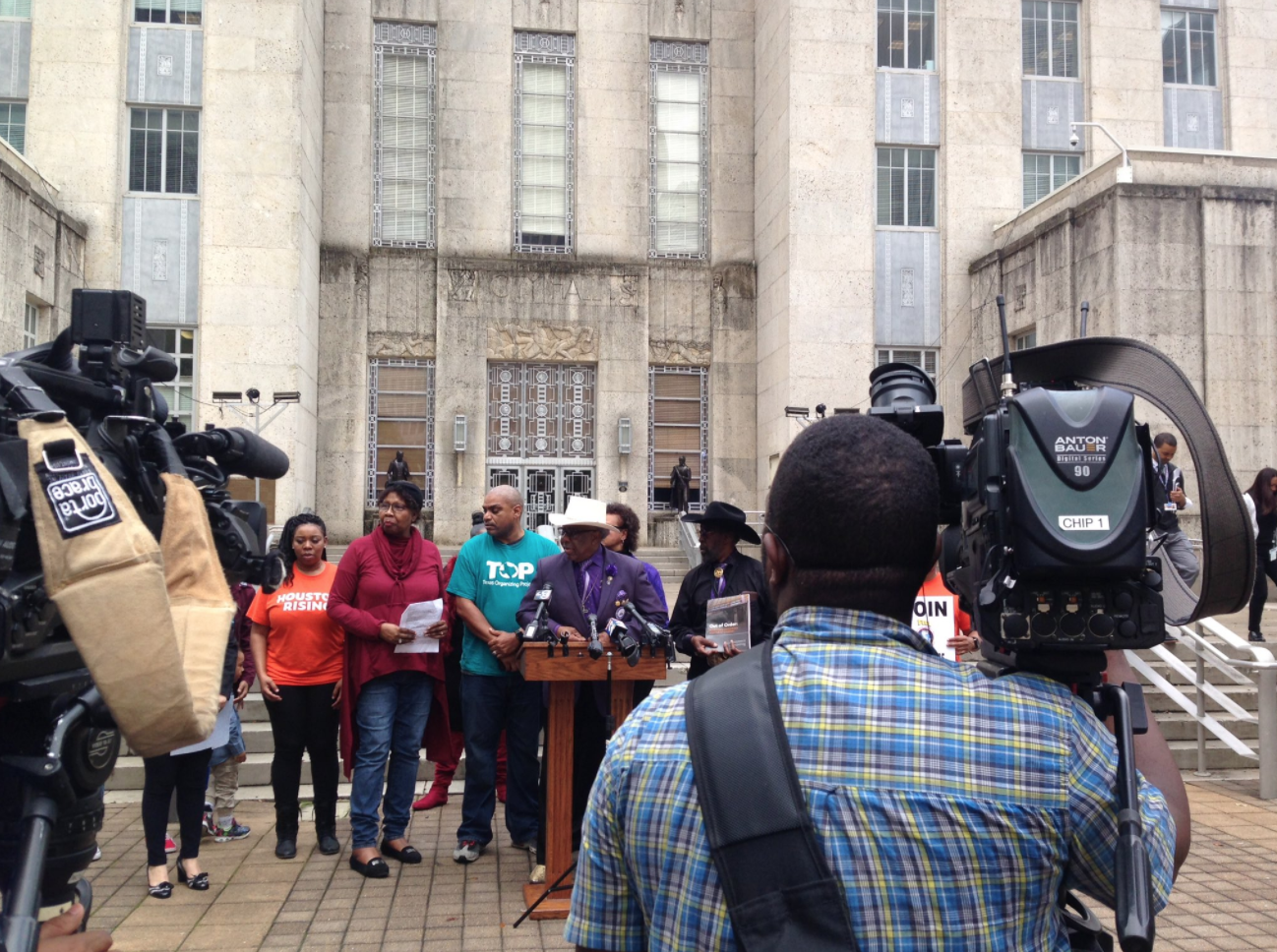 Yesterday outside Houston City Hall, a multigenerational group of tenants and tenant advocates  joined together to highlight dangerous code violations at apartment complexes throughout the city.  The press event, led by immigrant rights group FIEL, featured testimony from concerned community members across the city including Southwest Houston, Sunnyside, Acres Homes, and the Greenspoint neighborhood, which was severely impacted by Harvey.

The testimony of Ms. Willie Williams garnered special attention from the crowd.  Ms. Williams, who lives on Houston’s Northside is no stranger to floods.  Many of the apartments in her complex flooded three years ago and were inundated once again during Harvey.  After the storm, management in her apartment complex were able to move Ms. Williams from her ground floor apartment to a second-floor unit. Ms. Williams who suffers from COPD and a leg injury, is often exhausted by the climb to her new unit which is only accessible by stair.

Although she now has a dry place to live unabated mold from a flooded unit below has crept into her new space.  Despite requests to management to remove the mold, Ms. Williams’ grandson sleeps with mold growing above and around his bed.  The stress of subpar housing has taken its toll on other family members too who report persistent, severe headaches and nosebleeds.

Ms. William’s complex was built in 1979, a time when Houston’s building code was lax and poorly constructed housing popped up throughout the city.  Much has changed in the intervening almost 40 years since Ms. Williams’ complex was built. Houston has gained recognition as the nation’s most diverse city with the world’s largest medical center.  Still, for the tens of thousands Houstonians who live in apartments with unresponsive landlords and poor code enforcement and are left to deal with dangerous consequences on their own. This shouldn’t be the case in a wealthy city in a rich, industrialized nation.

City council members responded to testimony in mixed ways – some were defensive, highlighting the responsibility of agencies like HUD and Houston Housing Authority while others were supporting, offering to meet with residents and listen to their concerns.

The testimony and press conference at City Hall is just the beginning of this movement. Many tenants are organizing and demanding that more be done to protect them and their families in the places they call home.

Together with FIEL and the Texas Organizing Project we’re asking members of Houston’s business community, academics, and public servants to join our advisory committee on code enforcement reform and healthy affordable housing.  This committee will work in lock-step with tenants to create an agenda of sensible, impactful solutions to Houston’s dangerous apartment epidemic.  For more information on how to get involved contact Zoe at zoe@texashousing.org.

You can also share your story on social media with the hashtags: #OutofOrder and #descompuesto.