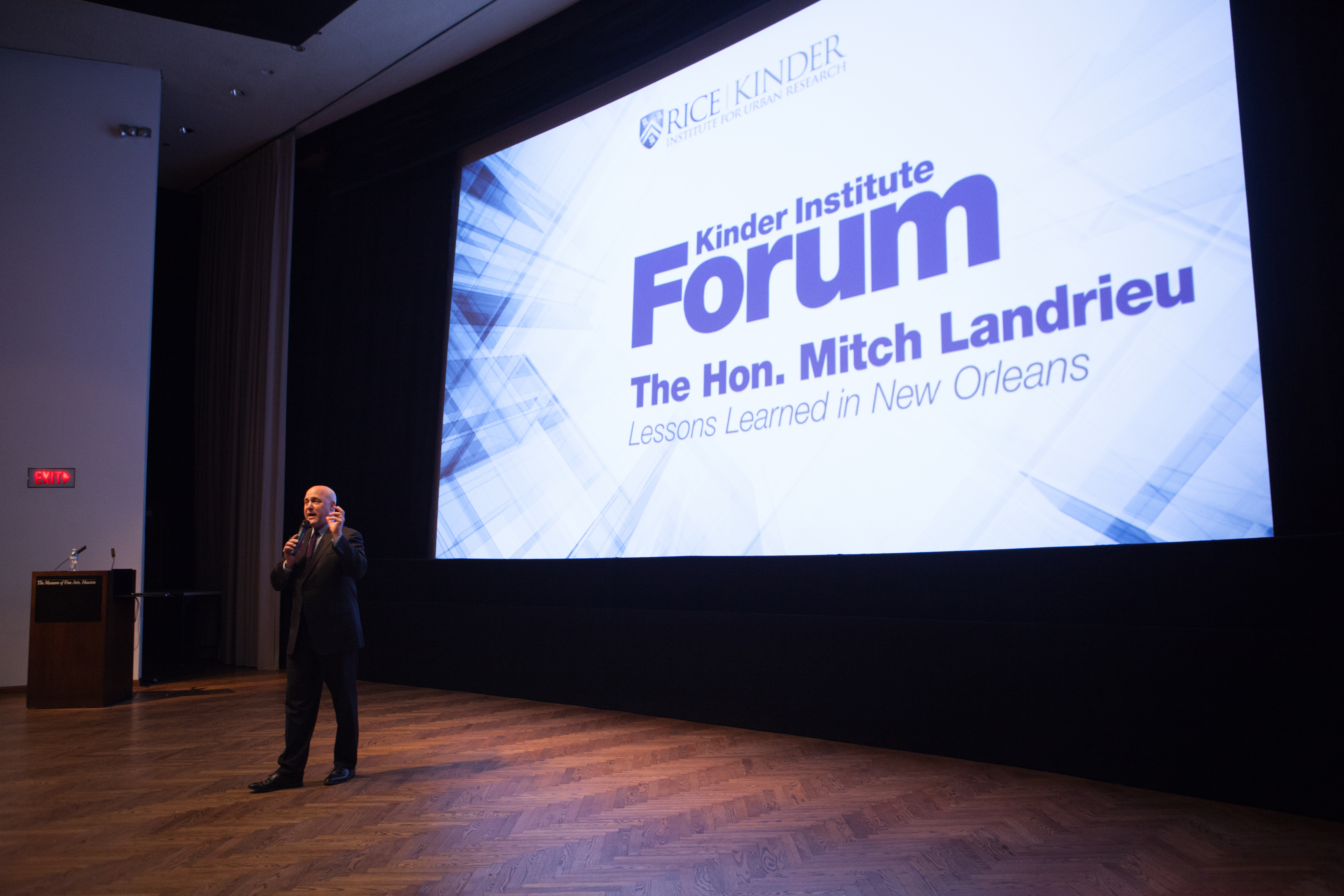 Houston has a responsibility to its community to rebuild Houston stronger than it was before Hurricane Harvey.

In order to build a stronger, more equitable city, resilient recovery demands a strategy that will “put the city back the way we should have done it.”

Mayor Mitch Landrieu of New Orleans took the stage last Wednesday at the Museum of Fine Arts Houston’s Brown Auditorium for another edition of the Kinder Institute Forum series to discuss his lessons learned in the years after Hurricane Katrina. More than six months after Hurricane Harvey inundated a third of the greater Houston area, thousands of families are still living in hotels or moldy houses, without sufficient funds to rebuild or relocate altogether. Many are already, or will soon be feeling the effects, of what Landrieu referred to as “Post Traumatic Storm Disorder.”

The hardest lesson Mayor Landrieu impressed upon the Houston audience was the admission of hubris. “You have to take a good look into the mighty think-all – the mirror.” In the aftermath of a disaster, Landrieu said that cities must admit to themselves, “You’re not really as great as you thought you were,” and take a hard look at what systems and inequities were in place before the disaster. Regarding the most disadvantaged during the recovery period, he stressed that city government must ask itself, “Where were they before the storm, and why were they there in the first place?” After taking an honest look at and identifying weaknesses, a city must then take responsibility for them.

In order to really think through what it means to get to a different place, Landrieu suggested cities ask themselves, “What are the toughest problems we have as a city? As a community? How does this reality align with our aspirations?” When Landrieu took office in 2010, five years after the storm, the city was still struggling to recover from Katrina’s devastation. In his time as Mayor, he has faced the difficult task of keeping the city out of bankruptcy, and bringing life and enthusiasm back to New Orleans. When tackling the city’s recovery, Mayor Landrieu looked to mayors of other major cities for advice, including Michael Bloomberg of New York, to develop a set of four guiding principles that he described to the audience:

Former Mayor Bloomberg further advised Landrieu to “do the hard thing first.” When asked by an audience member what the hardest thing he has had to do as Mayor has been, Landrieu responded: “It was all hard.” In order to avoid bankruptcy, Landrieu made the decision to cut city government by 22 percent; but as a Democrat who assured, “I believe in government,” he made the cuts “with a scalpel…knowing it would grow back.” Mayor Landrieu stressed, however, to be wary of mere replication of other cities’ strategies. “I wouldn’t necessarily take anything from New Orleans and make it a Houston thing.”

Responding to a question on how cities can respond to disruptive events, both weather-related and technological, Mayor Landrieu finished his talk by focusing on the importance of inclusion, to “govern in real time” and “respond in a human way.” In his closing words, he asserted that when communities or individuals become alienated, get the feeling that they are not being included, and going unseen, “That’s when we all lose.”