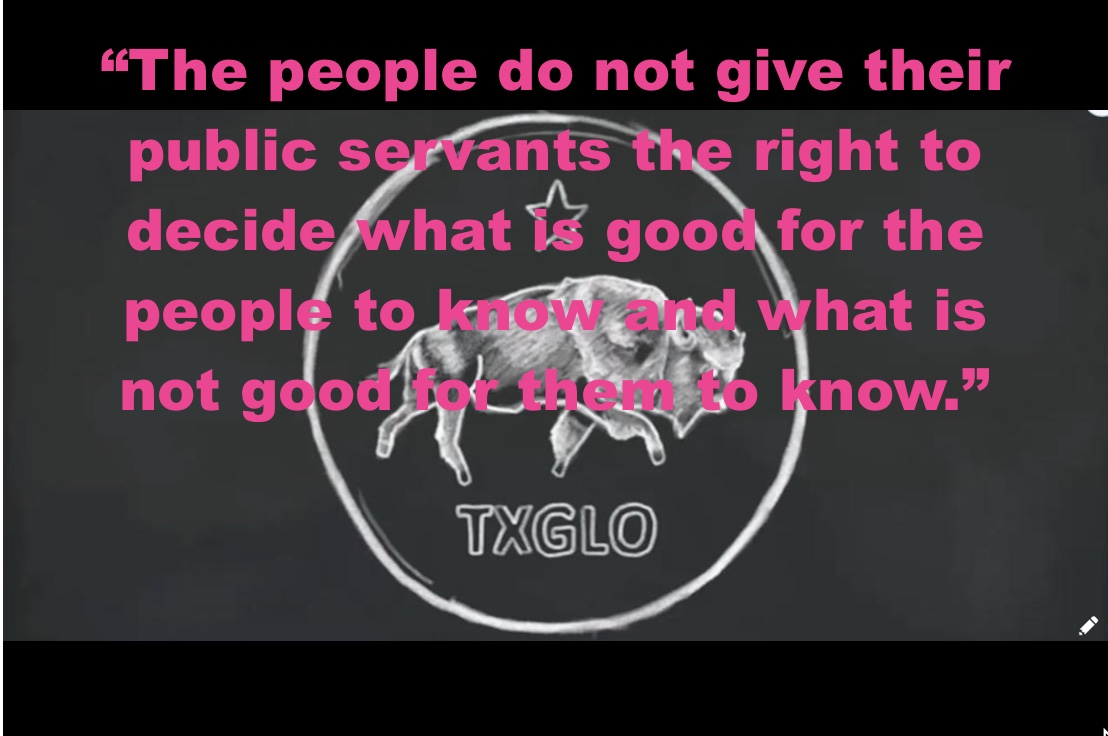 The State of Texas is spending many millions of dollars in public funds on short-term housing for Harvey survivors. That is an important thing. Yet, the public is being denied access to the details about how these funds are being spent because of an agreement between the State of Texas General Land Office (GLO) and FEMA to keep the information from the public. In the response to repeated requests since January by Texas Housers, the General Land Office, which administers disaster recovery for the state, has refused to disclose data and progress on housing repair programs.

The state General Land Office administers these programs under a contract it entered into with FEMA. While FEMA pays for 90 percent of the programs with federal dollars, the state must provide a 10 percent match. Texas taxpayers are specifically footing part of the bill, yet are denied access to information about how the program is performing. GLO officials say that the agreement negotiated between FEMA and the State prevents the state agency from sharing data with the public.

It is suspicious and outrageous that two government agencies got together and drew up a contract to agree to keep the details of their performance secret from the public.

Texans, “in delegating authority, do not give their public servants the right to decide what is good for the people to know and what is not good for them to know…”

Texas Housers believes this is a clear violation of the Texas Public Information Act. That law is vital to holding government accountable and responsible to the citizens. It was enacted over 40 years ago, in the words of state law, in order to provide “complete information about the affairs of government and the official acts of public officials and employees.” This fundamental public policy, according to state statues, is rooted in the belief that Texans, “in delegating authority, do not give their public servants the right to decide what is good for the people to know and what is not good for them to know,” but “insist on remaining informed so that they may retain control over the instruments they have created.” These are core principles and vital tools for a functioning democracy.

Texans’ insistence on government transparency means that every state agency must abide by the Texas Public Information Act. A contract with a federal agency should not permit a state agency to usurp this state law.

The GLO’s short-term disaster recovery housing programs have received significant media and public attention lately because of complaints of shoddy work or the slow pace of repairs. So far, the GLO says it has completed more than 10,000 partial home repairs. Yet it refuses to provide the public a detailed accounting.

This information is not only needed in order to know how the agency is performing with this short-term housing program, it also has important implications for how the future billions in disaster recovery should be allocated. This is the question the state and the public are weighing right now.  Information about state spending for short-term housing programs is essential in assessing which short-term needs have been adequately funded and which have not. The partial repairs provided by the short-term housing programs will often require additional federal recovery dollars from federal CDBG-DR dollars. Therefore, the data Texas Housers has asked for and been denied needs to be available if the public is to be given the informed opportunity to comment on how the forthcoming $5 billion in CDBG-DR funds should be used.

Any day now, the General Land Office will release its CDBG-DR action plan that will specify how $5 billion from the federal government will be used to rebuild homes damaged by Hurricane Harvey. At Texas Housers our core mission is to work for fair, equitable and just disaster recovery, fair and affordable housing and quality, equitable neighborhoods. For the last 10 years, Texas Housers has provided the public information and analysis of disaster recovery needs and the performance of government programs. Our work shines a light on what our government is doing for disaster survivors in order to evaluate how well government is using public resources for the recovery of disaster survivors.

State agencies like GLO cannot be permitted to keep their public spending and work performance secret. There is too much a stake. Hurricane recovery is complicated and very expensive. In past disaster recoveries government agencies have many times moved far too slow, used public funds inefficiently, discriminated against whole classes of people, and failed to serve large numbers and entire regions of the most impacted survivors. Government transparency is the only way to detect and prevent these problems.

State agencies like GLO simply cannot be permitted to keep their spending and performance secret. There is too much a stake.

Judge Livingston heard the case for transparency on March 29 in Travis County District Court. She is expected to make her decision about a temporary injunction next week.