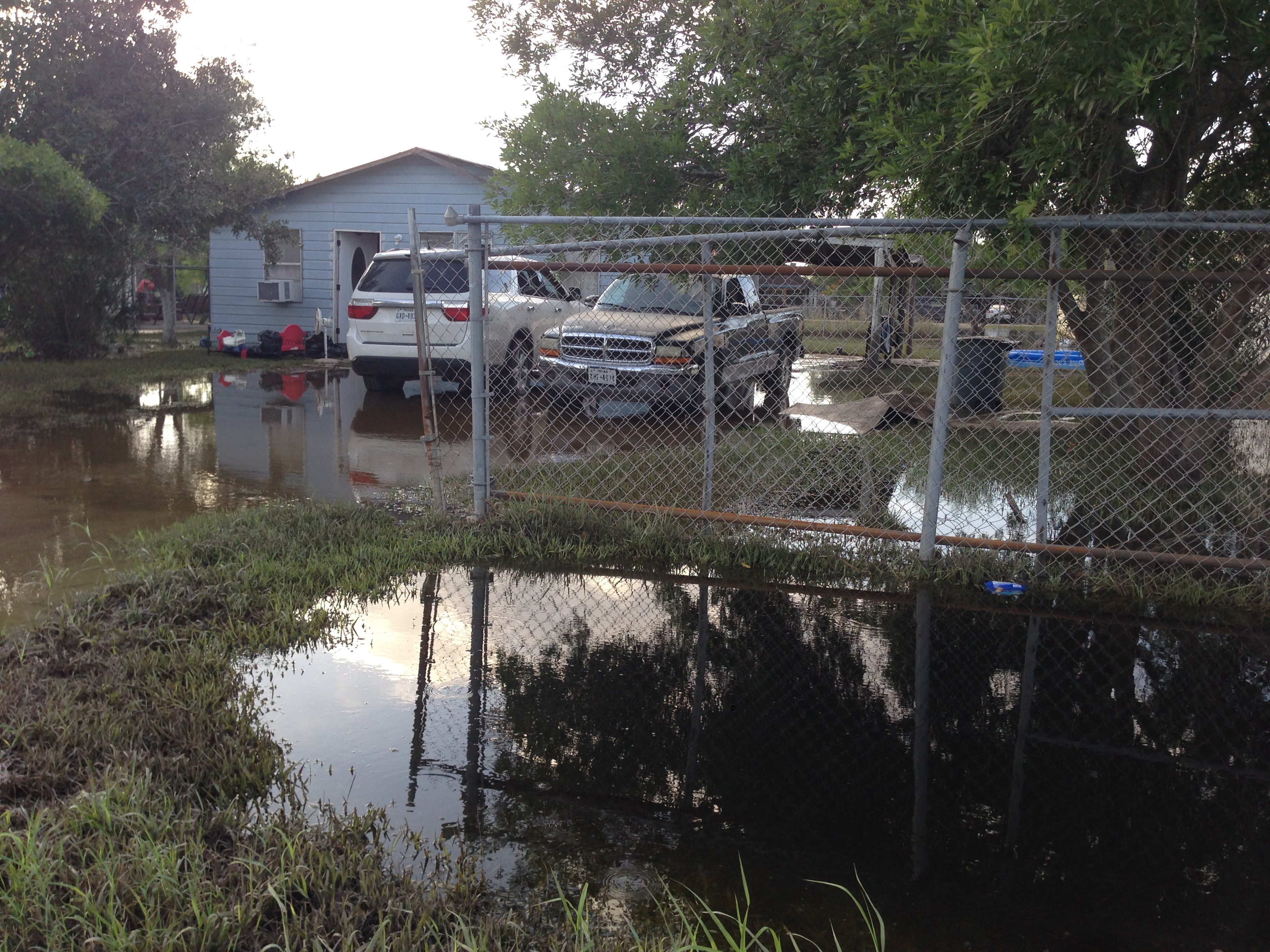 (Home in Indian Hills colonia that experienced flooding after the June storms. Photo taken a week after the storms hit.)

As Rio Grande Valley residents apply for federal assistance to help rebuild and recover from the heavy June flooding, Texas Housers and other advocates remain vigilant to ensure FEMA’s history of exclusion of many low-income families does not repeat itself.

Federal disaster assistance is now available for Rio Grande Valley residents whose home or property was affected in last month’s severe storms. About 3,000 residences and businesses in Hidalgo County, were flooded after rain pummeled the area, according to the National Weather Service.

The federal agency arrived in the Valley days after the storm to conduct preliminary damage assessments after Governor Abbott’s request for a federal disaster declaration, which triggers the process for receiving emergency federal assistance funds. The White House approved the request on July 6, and a week later the Disaster Recovery Centers were operational in Weslaco, Mission and McAllen. Residents have until Sept. 6, 60 days after the storm, to submit applications for assistance via phone, online or in person. Agents have started canvassing and door knocking in affected areas encouraging those impacted to apply.

As FEMA begins rolling out their operation many hope that the response is handled more appropriately than it was in Puerto Rico and many East Texas cities affected by Hurricane Harvey. Advocates also have another reason to be vigilant: After Hurricane Dolly struck in 2008 causing $1.6 billion in damage, FEMA denied assistance to many low-income families who sought help.

Earlier this year, 25 members of La Union del Pueblo Entero  (LUPE) represented by Texas RioGrande Legal Aid (TRLA) won an eight-year long case against FEMA. The case argued that the clients were denied assistance because of “deferred maintenance,” an arbitrary claim that the poor conditions of homes before the storm rendered them ineligible for assistance. This “secret rule” was a major problem in the Valley where many low-income homeowners in colonias are too poor to keep their home up to standards FEMA inspectors expect to see. The judge agreed with the plaintiffs and ruled that FEMA, “violated federal law by using a secret rule to deny home-repair assistance to 24,027 families after Hurricane Dolly.” According to the court’s decision, the emergency management agency “must issue its standards and criteria to distribute federal aid to disaster victims.” The decision not only meant that the two dozen families who sued received the aid they deserved, but it also clarified that FEMA could not continue to use such standards that exclude mainly low-income communities of color.

Another problem that community members in the Valley are concerned with is the cultural competency of contractors hired to conduct inspections, outreach and case management. Earlier this month, local, state and federal officials sent a request to FEMA for “representatives who can speak Spanish” noting, “the lack of Spanish-speaking FEMA representatives helping those affected by the floods with recovery assistance.”

Spanish-speaking residents have reported receiving visits from inspectors who only speak English but are equipped with translation equipment. According to a San Juan resident who wishes to remain anonymous, her inspection was easy because of the simultaneous translation conducted through the phone and an iPad.

Last week FEMA released an advisory about the public’s right to appeal the denial of assistance. Texas Housers is learning more from residents on the ground about how FEMA operates its disaster recovery efforts this time around and will continue to monitor the experiences of residents with disaster recovery processes. Rio Grande Valley residents do not deserve another 10-year battle to get the help they need. They deserve a responsive, inclusive system that is fair and just for everyone.