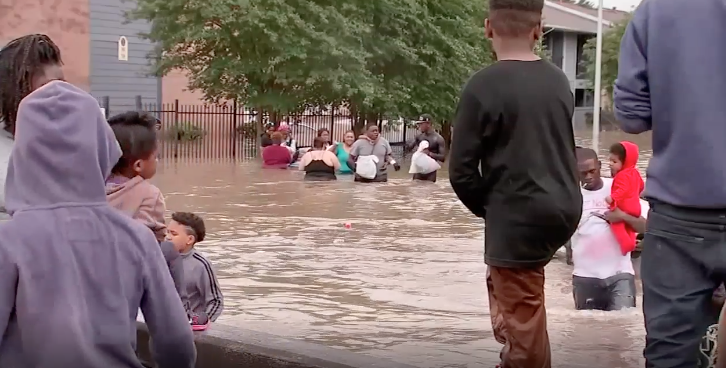 The expertise of each member of the Texas Housers staff is distinct – research, writing, community outreach, data crunching. But what drives each Houser in this work is the stories of the people who are battling injustice, oppression, unfair treatment, and even still, hope and work for change.

Last month the entire 15-member staff met with several of the women who live in Arbor Court Apartments. They are part of an initiative we’ve called The 12 Moms, They advocate for better living conditions and housing mobility with the help of our community navigator Ericka Bowman. The apartment complex is subsidized by the federal government and is located in a floodway. Arbor Court has flooded multiple times, and many of the units are unlivable. Aside from that, the apartments are in an area with high rates of crime and poverty which are detrimental to the health and safety of the children these women are raising.

Some of the women we met with are plaintiffs in a lawsuit against the owners of Arbor Court and the U.S. Department of Housing and Urban Development. Because of the deplorable conditions of the apartment homes, the women say HUD is in breach of its contract to provide safe, decent, and affordable housing for residents of Arbor Court. You can read more about the lawsuit here.

The women we met with talked about the times they were flooded out of their homes, the times they’ve witnessed violence in the neighborhood or heard gunshots. They also talked about what they accomplished, despite not having a true refuge in their homes. Some had training as medical assistants or are finishing up at community college. Some are retired and trying to rest from decades of hard work. Most are raising young children. Despite their individual struggles, the women wanted to know what else they could do to mobilize their neighbors and other tenants who deserve decent, safe homes and are not getting them. “We gotta speak out,” one of the more experienced of the women said. “We just gotta share what we’ve been through and what we learned.”

The meeting invigorated many members of the Texas Houser staff. Below are some of their reflections.

Last year, some residents of north Fort Worth protested the imminent closing of the Butler Housing Project because some tenants would move to newly built subsidized housing nearby. Some of the residents’ discomfort was caused by plain old racism, but residents also cited tired stereotypes about people who depend on subsidized housing to make ends meet. These people need to learn from the moms of Arbor Court. These moms are doing everything they can to better their lives and the lives of their children. They’re working jobs, going to college, taking their kids to school and activities, helping with homework, and all the rest. Now, after going through the horrors of Harvey flooding and putting up with deplorable living conditions, they are risking their housing subsidies to fight for the right to choose where they live and raise their kids. I was inspired by their example of civic heroism and how easily they smacked down the stereotypes our society too often believes.

Meeting members of the 12 Moms Campaign in Houston was a great activity in understanding the everyday context that people are facing. It is apparent that these women are tired of being pushed around. Their willingness to work and organize with their neighbors to not only bring about change in their apartment complex but in for the Greenpoint area is commendable and impressive. Especially taking on HUD to create a fairer system. Their tenacity is drawn from an interest in their children’s future and the belief that they deserve better.  I have no doubt that they will accomplish their goals.

It was incredibly exciting and inspiring to meet these amazing women, who despite having a million other things to worry about, were also determined to fight for decent housing. It’s one of those things we’re taught we have no power over and no chance of making change, and the moms have overcome that huge obstacle by speaking up publicly. Being in Houston and talking with them was a much-needed reminder of what I’m really here to do every day when I’m researching, calling, writing, attending hearings… I’m here to reinforce and project people’s struggle for a better life for themselves, their families and communities. Go, Moms!!!!

It is crucial to the work of the Texas Housers that we stay connected with the people behind the campaigns on which we work. Sitting down with Daija and some of the other mothers from the 12 Moms is a good reminder that while we are working on reforming oppressive laws and policies, residents continue to advocate for and demand change for themselves. We are not doing this work for them, but with them.

Meeting with the women living in abhorrent conditions at Arbor Court was equal parts invigorating and infuriating. It’s encounters such as these, and experiences as heartbreaking as theirs, which remind me why I do this work. I am outraged, as we all should be, that our tax dollars meant to provide families with safe, decent affordable housing are instead being used by HUD to place these families in harm’s way over and over again.

Hearing the moms tick off their efforts, one after the other, listing their education and recently attained certifications in various medical careers, and hearing them affirm their desire for a decent place to live reverberated through my thoughts for days. Over and over, I heard the enthusiasm and the willpower in their voices to get better jobs, to live in a decent place, away from gunfire, away from mold, away from flooding, and just in general to make a good life for their families.

I felt honored to be in the presence of the women who stood up for themselves to demand change for not just them, but for everyone. They were so bold and unafraid to ask us questions, and their motivation was captivating. It was difficult to hear the moms speak of all the hardship they had to endure.

Having the chance to meet the Arbor Court moms was incredibly inspiring. I remember looking around the room and feeling palpable solidarity and a mutual commitment – a reassuring sense that Housers and the moms are in the fight for fair housing together. Sometimes it’s easy working with data and maps to see quantitative injustice but not always as easy to see the people behind that injustice constantly fighting. Being in the same room as those very people and hearing their experiences and relentless momentum to organize reminded me that our data and research lacks any soul without people like the moms who continue to advocate for what they deserve.

Whenever we meet people for the first time, we have our own preconceived notions about them, these thoughts are usually combined with social prejudice or past experiences. As we got a chance to meet these brave women from Arbor Court, I wondered how anyone could think these woman as anything other than great. I appreciated the honesty and sincerity of their story. I work in communities like theirs and I am always impressed by the resiliency and pride that is displayed. As they began to speak, I began to root for them and hope that all that they desire will come to fruition.

One thing that struck me when we met with some of the Arbor Court residents was how much one of their leaders has stepped into her power in the five short months I’ve known her.  She’s (rightly) determined that she and her neighbors deserve dignity and freedom from the threat of floods, but she’s not content with simply winning her own fight. I’ve seen her ask when and how we’ll support other tenants in Greenspoint facing substandard conditions, flooding, and landlord harassment.