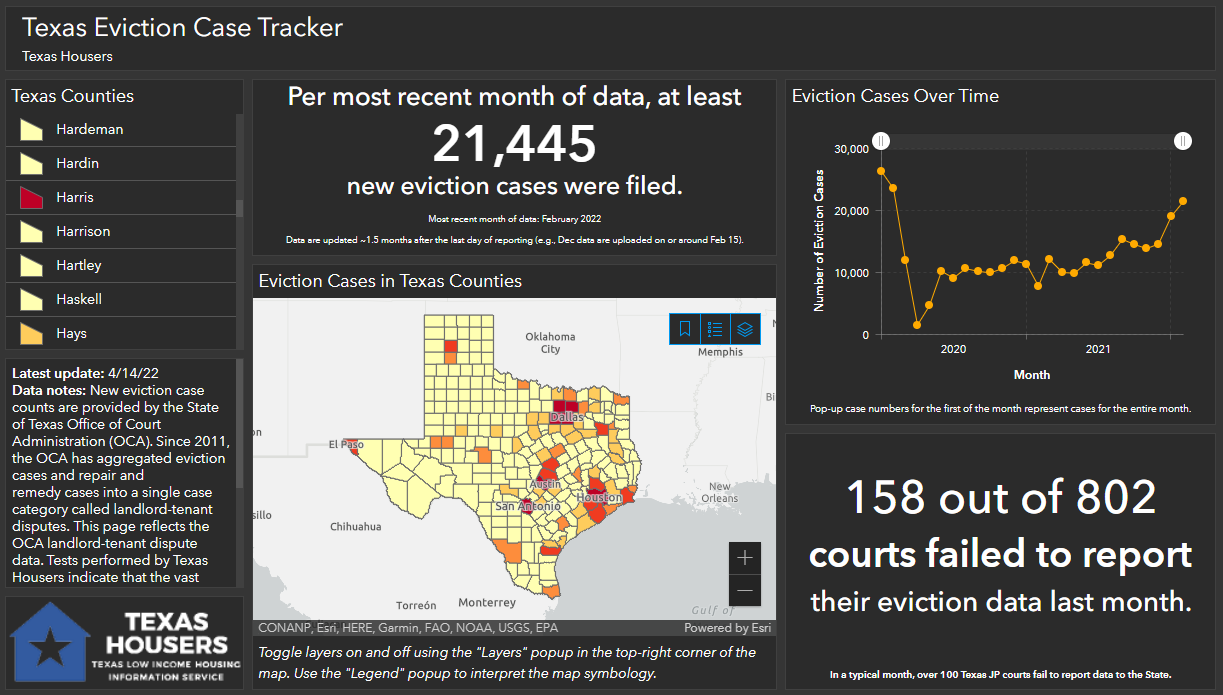 This new tool allows users to track new eviction cases numbers for Texas as well as individual counties in the state. Users can track eviction case numbers, rates, and change over time. The dashboard also tracks Justice of the Peace courts across the state who fail to meet their legal duty to report landlord-tenant disputes to the State on a timely basis.

The Eviction Case Dashboard helps users visualize and learn more about where eviction cases are occurring in the state. Although there are gaps, this is the most complete picture available of the number and rate of eviction cases in all of Texas’ 254 counties. Research has well established that evictions cause a host of health, educational, and other socioeconomic harms to individuals, families, and communities. The pandemic has only highlighted the role that stable, secure housing plays in leading a decent, healthy life. Simply understanding where evictions are happening frequently in Texas is a critical step to making evictions rare and fair.

The Texas Housers Eviction Tracker can also be used together with the Emergency Rental Assistance Tracker – which we launched last month – to reveal more about where ERA funding is still available yet eviction cases are moving forward in the court system, needlessly putting low-income tenants at risk. Both dashboards are conveniently hosted on the same page for comparison.

With today’s update of Texas Housers’ Eviction Diversion Tracker page, we can share the following insights:

The Texas Housers Eviction Dashboard uses data from the State of Texas Office of Court Administration (OCA). Texas Justices of the Peace are required to submit monthly case numbers and other case data to the OCA. Texas Housers will update the dashboard on a monthly basis, on or around the 15th of each month. You can visit the Eviction Diversion Tracker at texashousers.com/dashboard