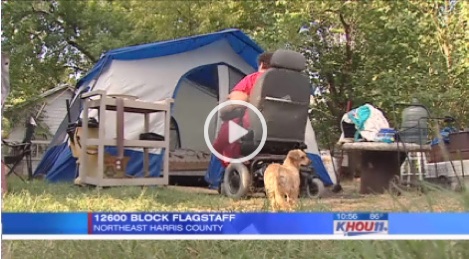 Just when you think you have seen the worst government can do to Hurricane Ike victims along comes this story.

This is funded with the $3.1 billion State administered disaster recovery program. Is no one monitoring how local recipients of the funds treat the people who are being “assisted” under the program?

HARRIS COUNTY—Three years after Hurricane Ike, a Harris County couple whose home was severely damaged is living in a tent.

“I never thought I’d have to live like this,” said Linda Kringen, a 66-year-old grandmother confined to a wheelchair.

She moved into the tent with her husband in July after contractors demolished the home they had shared for nearly 25 years. The demolition was necessary to break ground on a new home paid for by a government grant.

Participants in the program sign a contract informing them that the construction can take up to six months to complete. Participants are also advised to seek alternative housing, but the Kringens said they had no other options.

“Everything happens for a reason,” said Kringen. “It’s God’s will.”

The Kringens still remember what it was like when the hurricane hit.

“The ceiling started to cave-in and the walls began to collapse,” recalled Kringen. “We tried to sleep the night away, but it wasn’t easy.”

Now, they’re looking forward to packing up the tent and finally moving into their new home.

“I’ll never forget Ike, but at least it won’t be in the forefront of my mind,” she said.