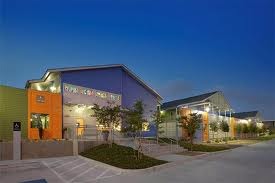 New Hope Housing at Bray’s Crossing, Houston, Texas was one of ten winners of the Urban Land Institute’s (ULI) Awards for Excellence: The Americas competition.  The winners of the awards competition, widely recognized as the land use industry’s most prestigious recognition program, were announced last week in Phoenix at the 2011 ULI Real Estate Summit at the Spring Council Forum

John Henneberger, Co-director of the Texas Low Income Housing Information Service, said, “The work of New Hope Housing is an inspiration to all who believe in the transformative power of housing to change both communities and the lives of the homeless. In every project New Hope lives up to their name and reminds us that great design is as important as sound finances and quality management. When all affordable housing practitioners applied the quality design sense to their work that New Hope Housing does then affordable housing will be not just welcomed, but sought after by all communities.”

Bray’s Crossing is the conversion of the former HouTex Inn—a 1960s-style derelict motel located along a major freeway—into 149 single room occupancy apartments for low-income citizens. Operated without the use of government rent subsidies, the project integrates a public art display into the building design, turning a former eyesore into a community canvas.  New Hope Housing developed the property, the architect was Glassman Shoemake Maldonado Architects.