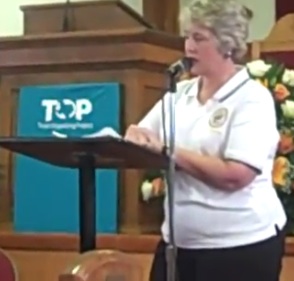 On Saturday, May 21, 2011, Texas Organizing Project (TOP) along with other supporting organizations spearheaded a record attendance Town Hall meeting to address the City of Houston’s lack of attention to Single Family Home Repair due to Hurricane Ike.

Over 300 attendants packed Jerusalem Baptist Church to receive information about the ongoing slow progress of the program.  TOP members shared their disturbing stories of how many of their homes had been shaken, battered and ravaged by Hurricane Ike. The storm’s assault on these homeowners was continued by challenges TOP members face in the City of Houston’s housing department.

The attention turned to a heart wrenching video prepared by Texas Low Income Housing Information Service highlighting elder homeowners whose homes are in utter disrepair due to Hurricane Ike. The video (below) captures the pain that many of these residents continue to endure even 2 1/2 years after the storm’s landfall.

Mayor Annise Parker attended the meeting and provided her insight and plan for moving forward.  She admitted that she can’t solve all the problems nor can she begin to solve all the problems that were brought in.  The mayor responded to criticism of the housing department, stating “I take great offense to the comment that our housing department is the laughing-stock of the United States.” She admitted the department had historical problems, including having to pay HUD back $15 million because they didn’t know how to follow federal guideline, but said, “I don’t think we’re there anymore.”

The mayor explained that in order to fix the problem she had to ‘clean the kitchen before [she] could cook,’ and they had just finished cleaning the kitchen.  Mayor Parker committed to coming back to the community to inform stakeholders of what is going on at the City.

However, she would not, despite such a request, commit to commissioning an oversight committee to oversee the housing department’s progress.

Councilwoman Wanda Adams backed the Mayor and affirmed that all efforts are being made to get the disaster housing program on track.

As the momentous meeting drew to an end, Congresswoman Sheila Jackson Lee roused the attendees as she blamed the City of Houston for not doing Senior Home Repair in the City and not reaching out for assistance.  More boisterous applause came after she called for the City of Houston to provide her office with an inventory of CDBG Disaster funds spent to date.

It remains to be seen how the City of Houston will follow through on the issues that presented Saturday afternoon. What was clear from this meeting was that the patience of the historically underserved communities in Houston is wearing thin.