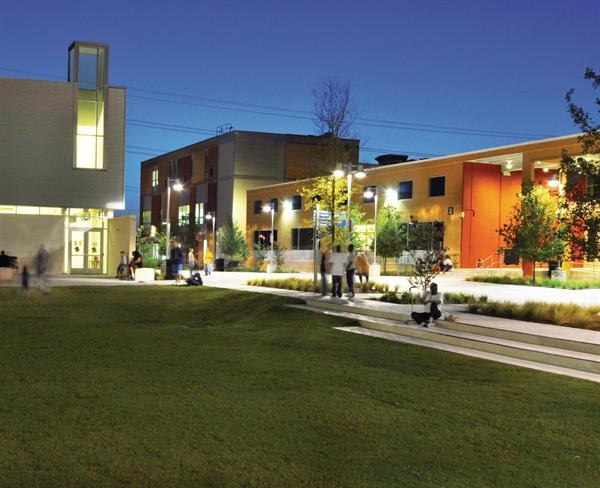 The Haven for Hope homeless facility in San Antonio, Texas is one of three recipients of the HUD Secretary’s 2011 Housing and Community Design Award for excellence in residential housing design.

The U. S. Department of Housing and Urban Development, in conjunction with the American Institute of Architects, selected the Haven for Hope homeless facility in San Antonio, Texas; the New Carver Apartments in Los Angeles, California;  and a renovation of a of a mid-century modern home in Seattle, Washington as models for a new generation of affordable housing.

“The award of the HUD Secretary’s 2011 Community Development Design Award to Haven for Hope in San Antonio is well deserved recognition for outstanding design but is also the latest evidence that Texas has begun to move to the front of the state’s in providing solutions that solve the most pressing problems of homelessness,” said John Henneberger, co-director of Texas Low Income Housing Information Service.

“Community-based solutions like The Bridge and Haven for Hope provide homeless solutions for its citizens. Two years ago the State of Texas made an unprecedented commitment of $20 million commitment of state funds to support to integrated housing programs like Haven for Hope inTexas’ eight largest cities. As this award is being made today, the Texas Legislature is considering whether or not to allow continued funding for programs like Haven for Hope in San Antonio and The Bridge in Dallas through the Governor’s Enterprise Fund.”

Danberry Carmon, HUD’s Field Office Director in New Orleans, will present the awards this evening during the 2011 AIA National Convention and Design Exposition in New Orleans.

About the Award and Haven for Hope:
Award for Community-Informed Design: Haven for Hope in San Antonio, Texas.  (Submitting Architect: James Andrews)

This award recognizes projects that incorporate housing with other community amenities for the purpose of either revitalization or planned growth. Determined to change the plight of its homeless population, the City of San Antonio, Bexar County, and nonprofit and private organizations worked together to develop a comprehensive campus of transformation to address and treat the root causes of homelessness.

Bordering downtown and a low-income community, the site itself was an industrial park that had included several abandoned warehouses. The challenge was to create public spaces that invoked a campus environment while reaching out to the community. Architects and stakeholders held design “charrettes” and progress meetings with service providers, interest groups, law enforcement, and neighborhood associations.

As a result of this state-of-the art facility, San Antonio-based agencies such as University Health Systems and the Center for Health Care Services have become intimately involved in the operations, and volunteers are an integral part of the campus. It has turned a formerly blighted area into an epicenter of promise and opportunity.