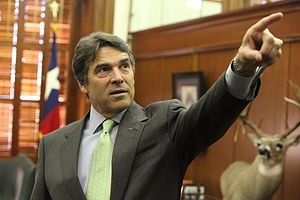 In a letter dated June 17 Texas Governor Rick Perry informs HUD Secretary Shaun Donovan that as of July 1 he is formally transferring designation of the state agency responsible for the administration of CDBG disaster recovery funds for Hurricanes Katrina, Rita, Ike and Dolly to Texas General Land Commissioner Jerry Patterson.

As allowed under the Consolidated Security, Disaster Assistance, and Continuing Appropriations Act (Public Law 110-329), the Department of Defense Appropriations Act of 2006 (Public Law 109-148), and Chapter 9 of Title II of the Emergency Supplemental Appropriations Act for Defense, the Global War on Terror, and Hurricane Recovery, 2006 (Public Law 109-234), I am changing the designation of the state agency responsible for the administration of the Community Development Block Grant (CDBG) disaster recovery funding for Texas to the Texas General Land Office (GLO). This includes all CDBG disaster recovery funding associated with Hurricanes Katrina, Rita, Ike and Dolly.

The move also will save on administrative costs by eliminating duplicative tasks and expenditures, and will provide a single contact agency for local communities impacted by Hurricanes Ike and Dolly. The role of local partners, especially the critical leadership role of the councils of governments, will remain in place.

To ensure a smooth transition of the program, GLO has been participating in state disaster planning and decision making for the past several months. Key GLO staff members have familiarized themselves with the Conciliation Agreement and have received training on the duties to Affirmatively Further Fair Housing. To ensure that GLO has the institutional knowledge and subject matter expertise, it has committed to hiring disaster recovery staff from the Texas Department of Housing and Community Affairs (TDHCA) and the Texas Department of Rural Affairs (TDRA) so those familiar with the program operations will continue at GLO.

This transition of responsibility will take effect July 1, 2011.