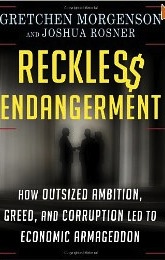 Let me first admit that I have not yet read the book but I plan to over the next several weeks.

The book is Reckless Endangerment: How Outsized Ambition, Greed, and Corruption Led to Economic Armageddon by Gretchen Morgenson and Joshua Rosner. It’s the story of the arrogance that was Fannie Mae before its collapse.

David Brooks’ column about the book in last week’s New York Times says the book lays bare the ways of Fannie Mae that have so infuriated me and others who questioned their practices for years.

Fannie ginned up Astroturf lobbying campaigns. In 2000, for example, a bill was introduced that threatened Fannie’s special status. The Coalition for Homeownership was formed and letters poured into Congressional offices opposing the bill. Many signatories of the letter had no idea their names had been used.

Fannie lavished campaign contributions on members of Congress. Time and again experts would go before some Congressional committee to warn that Fannie was lowering borrowing standards and posing an enormous risk to taxpayers. Phalanxes of congressmen would be mobilized to bludgeon the experts and kill unfriendly legislation.

Fannie executives ginned up academic studies. They created a foundation that spent tens of millions in advertising. They spent enormous amounts of time and money capturing the regulators who were supposed to police them.

While these machinations to buy off or stifle anyone potentially critical of Fannie were outrageous and will make for some validating reading, the tragedy of Fannie Mae was also about what it did to low-income communities and minority borrowers.

Most present day critics of the Government Sponsored Enterprises (Fannie, Freddie) have either not understood or have distorted for political purposes the role of the GSE Affordable Housing Goals in the crisis.

The prevailing postmortem goes like this: the GSEs, to meet the GSE Affordable Housing Goals imposed under the Clinton and Bush Administrations, abandoned sound underwriting requirements for loans they purchased in minority and low-income markets, producing a flood of subprime and Alt-A junk home mortgages which were packaged as mortgage-backed securities… well, you know the rest.

In this view the GSE Affordable Housing Goals were a contributing cause of Fannie’s irresponsible behavior.

That is categorically untrue.

I watched the junk loan mess created, studied Fannie’s home loan purchase practices in the Dallas/Fort Worth markets and tried repeatedly to get the attention of regulators at HUD and members of Congress. The requirements of the GSE Affordable Housing Goals were not the cause. Fannie never met the goals. Instead, Fannie convinced, bribed, bought off, intimidated, and drowned everyone in studies to permit them to rewrite the goals to let them do something entirely different.

Using the methods Brooks’ column points out, Fannie co opted Congressional leaders, the Administration and HUD to let them reach the goals by buying junk loans instead of “leading the market with prime lending” as the housing goals required.

I’m not going to get into all the details in this post. If you want to, read our several hundred page critique, written before the collapse. I’ll post my own more thorough Fannie Mae postmortem after I read Morgenson’s and Rosner’s book.

For now let me just say that there was no functioning home mortgage market in minority and low-income neighborhoods when the GSE Affordable Housing Goals were enacted. Afterward neither Fannie or Freddie took any real steps to spur the creation of a functioning, safe and sound alternative to subprime lending. The law told the GSEs to work with their lenders to build one; to use their vast portfolio of loans and corresponding lender network to define a prime home mortgage loan product that would make homeownership possible for credit worthy minority and lower-income community homebuyers.

Fannie was supposed to devise the alternative to the subprime loan, not become the largest purchaser of subprime loans.

Fannie allowed the lenders they did business with to create a subprime loan product that got borrowers in over their heads. In the process a fantasy world of near universal (temporary) homeownership was created with Fannie as the main enabler. Fannie bought those junk loans as a quick and easy way to fulfill affordable lending goals. Congress, the Clinton and Bush Administrations and HUD all put on blinders, let Fannie redefine the affordable housing goals and get away with it.

The new book is about what Fannie Mae did to bully, intimidate and lobby to get its way. That is important to know. But it’s really what Fannie Mae did not do that caused the economic crisis. That is what we all need to understand before the debate later this year on the future role of the GSEs in the mortgage market.

There are too many people buying into simplistic and politically motivated erroneous assessments of what the GSEs wrought.

The subversion of the GSE affordable housing goals by Fannie Mae and not the goal itself is at the heart of this economic Armageddon.