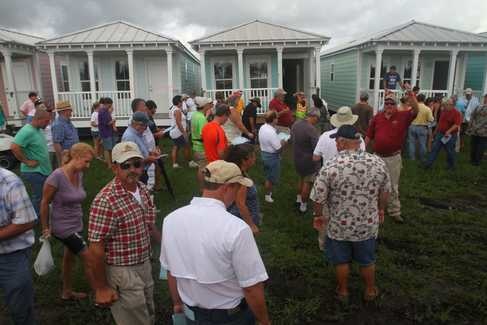 Editors note: Katrina Cottages were an alternative to the much disparaged FEMA trailer. They look more like homes and won somewhat more acceptance in cities than did FEMA trailers. But many communities still rejected them because of their temporary nature.

Costing from $30,000 – $52,000 plus moving and set-up costs, the Katrina Cottages ended up not shaving a whole lot off the cost of the FEMA trailers. It appears that many were never turned into permanent housing according to this story from the Biloxi Mississippi Sun Herald.

The Texas Natural Disaster Housing Reconstruction Demonstration Program seeks to learn from the experience of the Katrina Cottage by building a modular home core that can provide a temporary home that is incorporated into a permanent house over time.

The state recouped $2.44 million from a post-Katrina housing program Friday after an auctioneer completed the public sale of 171 Mississippi Cottages on display near Gulfport.

MEMA had bought the units for displaced hurricane survivors at prices ranging from $30,000 to $52,000, depending on the size, floor plan and handicap-accessibility, Roberts said. The cottages are 462 square feet, 812 or 924 square feet. Some were new and some need repairs.

An auctioneer, seated with a microphone in the back of a truck with open sides, led the group across the property as each cottage went up for sale.

Matt Fisher of Tallahatchie County came looking for a two- or three-bedroom unit.

“It’s for a farm laborer in the Delta,” Fisher said.

A Moss Point man who identified himself as Willie said he was “looking for something cheap I can rebuild and rent.”

Alex Ventress of Woodville wanted a three-bedroom cottage, but said he had no idea how much it would cost to move it and set it up.

A Vancleave woman was looking for affordable housing for a friend in need. She said she had already checked on the moving costs — $500 to move a small cottage up to 50 miles plus $6 for each extra mile.

Others in the crowd said they were looking for secondary housing for a fishing or hunting camp or a waterfront home away from home.