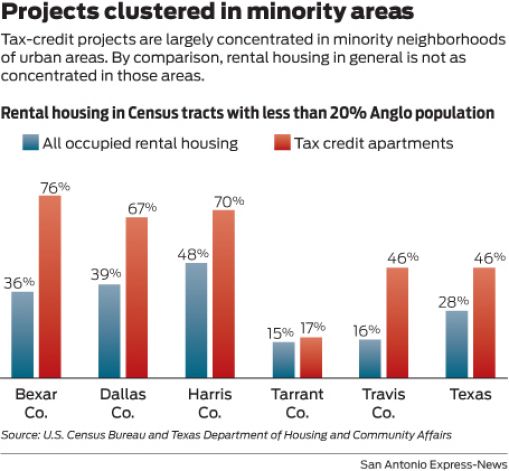 Reporter Karisa King’s full Texas housing story is out in the San Antonio Express News. It is a devastating expose of the Texas Low Income Housing Tax Credit program. $9.7 billion in federal funds have been spent by the State of Texas that has on balance enhanced racial and ethnic segregation through the State’s administration of the principal housing program.

The chart below tells you almost everything you need to know about her research. This can no longer be tolerated as a benign matter. This is an ongoing major violation of the Civil Rights Act of 1968 that a number of developers and advocates have complained about for years. We issued a report in December 2010, which I presented to the TDHCA board that produced only minor changes in the State’s LIHTC program.

Today’s story in the Express News, the Texas Tribune and the New York Times sets the evidence squarely in front of everyone.

This is the second earthquake to strike the Texas LIHTC program in just two months. The first was the federal judge’s decision in the Dallas LIHTC segregation case which found the State had produced housing segregation through the program, albeit not on purpose. The Texas Legislature put in place the law that steers developers to poor and minority neighborhoods to avoid having their projects in non-minority neighborhoods killed by community opposition. Today’s story paints this effect of this State law with devastating clarity.

The other major findings in the SA Express News story are: