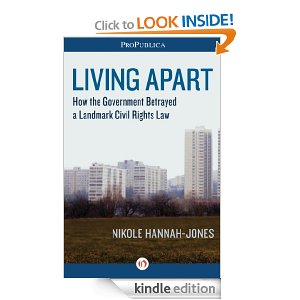 Nikole Hannah-Jones of the news service Pro Publica published a major investigative story today on the failure of HUD to carry out provisions of the Fair Housing Act requiring states, counties and cities to “affirmatively further fair housing” as they spend funds using Community Development Block Grants, public housing and other HUD programs. The story is a first rate summary of the long-term federal neglect that has impeded enforcement of this important civil rights law.

Today’s story chronicles the experience George Romney, President Nixon’s HUD Secretary, had trying to enforce the Fair Housing Act. This story has been told before but is worth remembering. Romney was essentially forced out as HUD Secretary for taking seriously the law requiring local governments to use HUD funds to promote residential racial integration. As a former governor of Michigan, Romney saw first hand in Detroit and its white suburbs the problems that racial segregation produces.

As HUD Secretary Romney was responsible for enforcing the requirements that cities “affirmatively further fair housing” when they take funds from HUD. When he cracked down by withholding HUD funds from communities that did not comply, that did not sit well with mayors. The mayors let President Nixon know of their displeasure and Romney was forced out.

President Clinton’s HUD Secretary Henry Cisneros also had an abbreviated and unsuccessful experience enforcing fair housing in his attempt to desegregate the all white public housing development in Vidor, Texas. Under his administration regulations to carry out the fair housing law through HUD programs were stonewalled by HUD bureaucrats and killed as a result of another round of opposition from mayors.

Racial integration in housing too often remains a relative low priority within HUD forty years later. This is not to say that HUD has not made some serious efforts. I’ve seen this first hand.

In May 2010 HUD approved a conciliation agreement between the organization I work for and the State of Texas over systemic fair housing problems with the State’s $3.1 billion Hurricane Ike and Dolly CDBG funded Disaster Recovery program. To date, senior HUD staff within the divisions that oversee Fair Housing and block grants and in the Secretary’s office have insisted that the conciliation agreement be followed. They have gone so far as to threaten to withhold funding when local jurisdictions sought to evade the requirements to produce integrated housing. There has been a genuine commitment and courage by HUD on this issue.

But there are valuable lessons HUD should learn from the ProPublica story. The type of political resistance to integration that forced out Secretary Romney and through which a small racist Texas town prevented HUD Secretary Cisneros from desegregating public housing twenty years ago persists. HUD’s failure to implement the law’s mandate to promote integration systematically through its programs have meant that in the intervening years billions have been spent to largely reinforce racial housing segregation.

I know Secretary Donovan and many in his senior staff understand this. I have seen first hand that, presented the right circumstances, they will enforce the law. But a greater systemic, top-to-bottom commitment within HUD and among the local recipients of HUD’s funds is needed to realize the promise of the law.

The Fair Housing Act was passed by Congress more than 40 years ago at the urging of President Johnson. After many years of filibuster the law finally passed in the wake of widespread rioting that occurred immediately following the assassination of Dr. King. Our country has paid a terrible price to be able to make a commitment to civil rights in housing — too high a price to permit the law to go unenforced. Perhaps the key community integration provision to affirmatively further fair housing in the law will be fully enforced through regulations in a second Obama Administration. Or perhaps as President Mitt Romney will be motivated to vindicate his father’s courage and do what is father tried and failed to accomplish.

This we do know: in the minds of our political leaders the political cost of requiring cities to affirmatively further fair housing when they spend HUD funds will weigh heavily. For more than forty years those costs have often prevented HUD from doing what is right and what is required by the law.