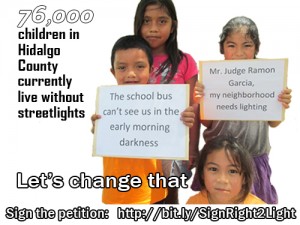 This Thanksgiving there not many people are thinking about how grateful they are for their streetlights and storm sewers. But residents of Texas border colonias are worried because their communities lack these basic public services that most people take for granted. After a series of tragedies involving children waiting for their school bus in the dark, La Unión del Pueblo Entero (LUPE) is working to aid colonia residents to convince Hidalgo County officials to provide the things.

Residents of colonias have been working to get streetlights for years.

They are also seeking public storm water drainage to stop the repeated flooding of their homes. The Rio Grande Valley newspaper The Monitor reported on the problem this month

For more than a week after Hurricane Dolly hit South Texas in 2008, Hortencia Medina waded through nearly waist-high water to get through the kitchen of her home in the Hidalgo Park colonia.

“The first day it was at my ankles in my kitchen and then it kept rising and I was cooking while it happened,” the 41-year-old mother of five said in Spanish. “I was cooking in my kitchen and my kids were crying, wondering why water had come into our house, and we couldn’t go outside … and I was crying because I thought: ‘Well, why is this happening to us? Why doesn’t our city do something about this?’” …

“It’s priority No. 1,” said Eva Soto, 47, who lives in the South Tower Estates colonia. She explained that she thinks the drainage systems cities employ work adequately. “We don’t want nothing better, we want just equal, just the same things.”

What is wrong with State of Texas officials and Hidalgo County commissioners that permits them to ignore for decades these simple, basic needs?