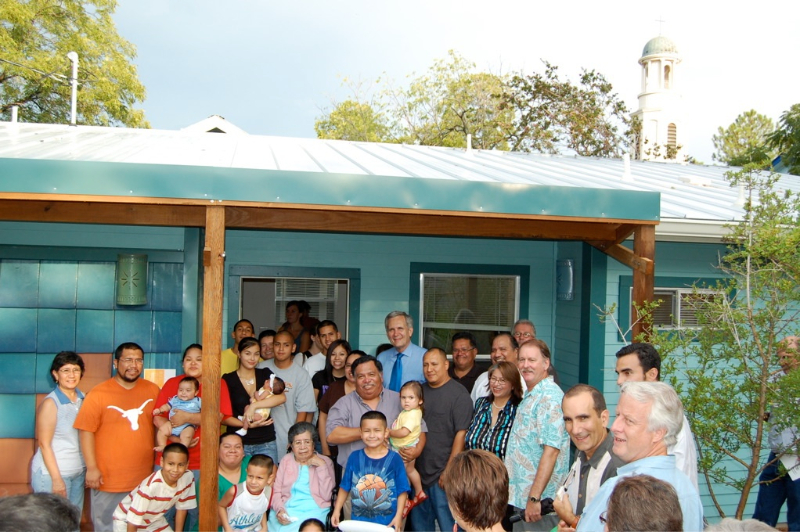 Community development corporations (CDCs) are the lifeblood of the low income housing movement, building quality affordable homes and preserving diversity and community in traditionally marginalized areas. In Texas we are fortunate to have several outstanding CDCs working tirelessly on behalf of low income residents. This series of CDC Spotlights will take a closer look at what that work entails, the challenges CDCs currently face, how CDCs are evolving and more. Today’s installment spotlights the Guadalupe Neighborhood Development Corporation in East Austin.

For the Guadalupe Neighborhood Development Corporation (GNDC) in East Austin, “preservation” is not just about the past. It’s also about the present and the future of a neighborhood that is quickly becoming out of reach for many. “It’s the 700 people on our waiting list, who really want to live in their neighborhood but can’t,” says GNDC executive director Mark Rogers.

GNDC was founded in 1981 and our co-director John Henneberger was its first executive director. The organization develops and rehabilitates affordable housing in a large swath of Austin’s East Side, from Interstate 35 out to a new development near Oak Springs Drive and as far east as Highway 183. It’s the area most notably affected by Austin’s rapid gentrification, a series of historically lower income, African-American and Hispanic neighborhoods (we previously profiled Blackland CDC, facing similar issues in a neighborhood just north of Guadalupe). While the area’s demographics remain diverse, Rogers sees the writing on the wall: In 20 years, he says, there’s a real risk that East Austin will be almost entirely wealthy and white.

“As the dam is breaking, how do you stop that?” Rogers asks.

It’s the most important question for a community development corporation in a gentrifying neighborhood, and one that GNDC is trying to answer.

“GNDC from its origin was about single-family infill,” Rogers explains. The organization bought cheap land and built affordable, single-family homes for less than $60,000. Rogers remembers buying two adjoining lots and leaving one vacant because it made for a nice yard for the families in the duplex next door. Although originally focused on the small neighborhood immediately surrounding Our Lady of Guadalupe Catholic Church, over the past 35 years, GNDC has gradually expanded its boundaries, working with the City of Austin and private developers on projects further south and east.

But in the past decade, things started to change. In 2005 GNDC sold a new home for $110,000. Four years later it was back on the market, and since GNDC has a right of first refusal on the homes it sells, the organization’s board members considered whether they should reinvest in the property. One problem: The price had jumped to $213,000.

“Everybody sat there with their jaws on the table and said, ‘I don’t think this is going to work anymore,’” Rogers recalls.

Buying any land in East Austin, especially closer to Guadalupe’s traditional boundaries close to downtown, became increasingly difficult. Lots in the traditional area often sell for as much as $400,000. Consequently, the need for affordable housing has risen dramatically. GNDC’s one multifamily development, La Vista de Guadalupe overlooking downtown Austin, was completed in 2008. At the time, the organization’s waiting list was around 250 people, and Rogers was pleased that the new development would house about 10 percent of the list. Since then, the number of people waiting for housing has nearly tripled.

Because GNDC has mostly focused on single-family development, the lack of available, affordable property in East Austin posed a serious problem. Much like Blackland CDC, GNDC started thinking about ways to get more housing out of the land they already owned. Many of the lots with one GNDC home are zoned for more development, and could have been built on more densely. “We were kind of naive,” Rogers says about some of the organization’s past low-density construction.

However, Rogers points out that as a neighborhood organization, GNDC is responsible for maintaining the character of the community they build in. “We have a challenge that for-profit developers don’t have, in that we want to respond to neighborhood wishes,” he said. And it’s important to many in Guadalupe to keep the neighborhood’s residential character intact.

A recent City of Austin rule change allows for the construction of more Accessory Dwelling Units (ADUs) on smaller lots. GNDC has already been building small secondary units on some properties in East Austin through the award-winning Alley Flat Initiative, which adds environmentally friendly, detached residences in backyards along alleyways, blending the additional housing unobtrusively into the neighborhood. Some neighborhoods have been skeptical of ADUs because of fears about developers building incongruous, crowded housing. But Rogers says that more and more neighbors are getting behind GNDC’s small unit projects as a way to increase affordability while strengthening the residential character of the neighborhood.

GNDC’s latest project, the Guadalupe-Saldaña Net-Zero Subdivision, will not only increase density, but more than double the organization’s housing stock. In 2005, GNDC purchased a seven-acre site that turned out to be a brownfield. During the intervening years, GNDC cleaned up much of the property and built the infrastructure for 74 units of the eventual 125-unit neighborhood. In 2013, GNDC opened four energy-efficient duplexes on the site with four units serving as a pilot project for its partners at the Jeremiah Program, a Minnesota-based nonprofit that works with single mothers pursuing their college education. GNDC will soon begin construction on a 35-unit apartment complex and child care facility. Next door on another four-acre property, GNDC has relocated some refurbished homes from downtown’s Rainey Street, a historic neighborhood that is now mostly bars and condominiums. The Rainey houses are now each owned by first-time homebuyers for between $100,000 and $125,000. Twenty-four additional new homes will be built and sold on that site as well.

The homes are part of a community land trust, perhaps the most important component in GNDC’s quest to preserve affordability. In 2011, the Texas Legislature approved a bill from Sen. Royce West of Dallas to allow allow public and nonprofit entities to place land they own in a trust. Homes can be built and sold but the land remains the property of the organization (the model was recently profiled in The Atlantic). Community land trusts let property stay in the hands of an organization with the neighborhood’s best interests in mind, keeping taxes much lower and more stable, while also allowing low income residents to build wealth through homeownership.

Rogers and other advocates have also successfully negotiated with the Travis County Appraisal District to keep tax appraisals for land trust properties much lower than market value. Instead of paying $3,000 or $4,000 in taxes for the land alone, land trust homeowners will pay between $250 and $650 per year, and instead of taxes going up 10 percent annually, they will only see their property taxes increase by 2 percent each year, Rogers says.

GNDC sold the first community land trust home in the state in 2012 and just last year its staff found a mortgage lender willing to provide mortgages for land trust home sales. Its stock of land trust housing is small, but growing. Rogers said that he is talking to people in Houston and elsewhere about creating land trusts around the state. “Hopefully it’ll start to happen more,” he says.

Preserving for the future

GNDC gives priority to the people on its waiting list with connections to the neighborhood – for example, having had family in the area for 25 years or longer. The mission is to help the people who have always considered East Austin home actually have opportunities live there. Many have been forced to live on the edges of town, Rogers says, or further out in Kyle, Hutto, Seguin and beyond.

Rogers has heard some of the area’s new residents raise NIMBY concerns about increasing low income housing on the East Side, which is still home to several public housing complexes and other affordable developments. “‘We already have enough,’” Rogers says he hears. “Yes, [low income housing] was historically concentrated here. But during the past decade, we’ve been losing it at a rapid rate.”

He raises a worthwhile point about fair housing policies that seek to locate low income residents in high opportunity areas. Rogers says that while those policies are necessary, they need to take better stock of how gentrifying areas fit in. Although parts of East Austin may not meet the definitions of high opportunity areas now, that is quickly changing. Building and preserving affordable homes now will help low income residents benefit from neighborhood improvements in the future.

“We need to look 20 years ahead and project what the neighborhood will look like then, and make sure affordability is preserved,” he says.