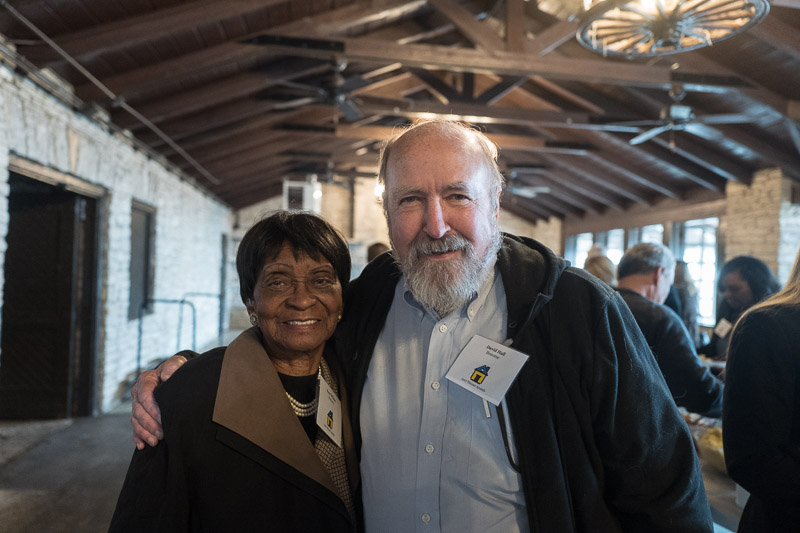 Photo shown above are 2017 Housers Rose Wilson and David Hall.

Texas Low Income Housing Information Service recently honored four individuals and one organization who have advocated fair and affordable housing across the state. Some have devoted their whole careers to the cause, while others have made meaningful change in just a few years.

We call these individuals an organizations Housers. Each honoree received a portrait of themselves with the inscription:

Houser: A person committed to raising the quality of life through improving availability of and access to shelter for low-income families.

Texas Housers honored Sandy Rollins, executive director of the Texas Tenants Union. Sandy has been devoted to improving living conditions for low-income residents in Texas for years and has been instrumental in the fight to make renter fees fairer, and protect the affordable housing stock across the state. She has also helped to protect tenants’ right to organize in the Texas Property Code.

Juliana Gonzales has taken the reigns for the Austin Tenants Council and has become a prominent voice in the legislature. She has also been a strong advocate for renters in the city of Austin as the area grapples with a shrinking affordable housing stock.

David Hall has led Texas RioGrande Legal Aid for more than 40 years. During his legendary career as an attorney in the Rio Grande Valley, he has defended South Texas farmworkers, fought to help Mexican American residents in colonias have their voices heard in local government, and ensured that even some of the region’s poorest residents have access to effective legal representation.

Rose Wilson was president of the NAACP Lubbock chapter for more than 30 years. She also worked closely with West Texas Legal Services as the president of its client council, and served as a plaintiff in several lawsuits aiming to integrate Lubbock’s political system and schools and further fair housing policy. She was also a plaintiff in Jones vs. Lubbock, a case filed in 1976 aiming to replace Lubbock’s at large city council districts, which had been established in part to prevent minority representation, with single member districts.

The Houston Chronicle has reported extensively about fair housing issues. Houston’s newspaper of record has covered the aftermath of the Memorial Day floods and a federal investigation of the city’s housing practices, including the siting of public and affordable housing.

More photos of the awards below: