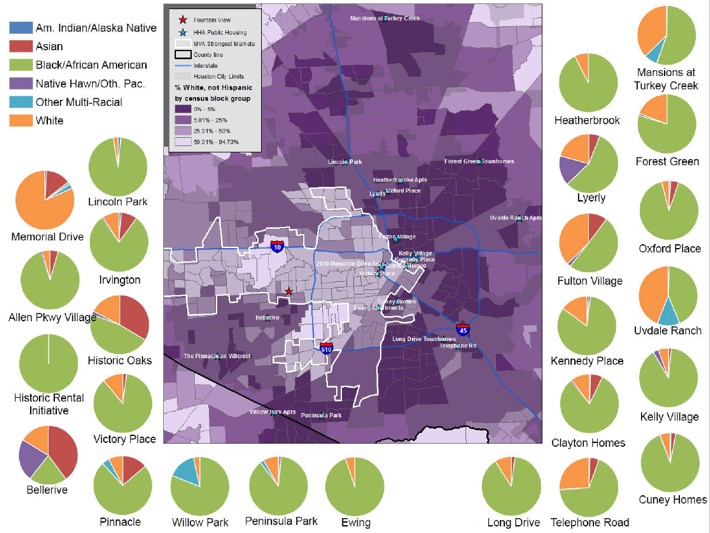 The Texas Low Income Housing Information Service (TxLIHIS) has told the U.S. Department of Housing and Urban Development that it must resolve longstanding federal civil rights violations by the City of Houston and the Houston Housing Authority in order to permit the two local governmental entities to be able to receive further funding.

The statewide advocacy organization, with offices in Houston and Austin, also filed a new civil rights complaint with HUD alleging that the City of Houston has provided inferior drainage infrastructure and storm water protection in low income neighborhoods that are disproportionately Latino and African American.  This complaint highlights the City’s failure to take actions that would have mitigated repeated flooding in these neighborhoods, including the Greenspoint area.

In January 2017, the federal housing agency issued a determination finding following a civil rights investigation of complaints by TxLIHIS and Texas Appleseed that the city had consistently blocked affordable housing proposals in predominantly white or integrated areas of the city.  HUD’s investigation found that City of Houston decision-makers had perpetuated segregation by its decisions and had denied people, based on race and national origin, access to neighborhoods that suit their families’ needs.   Read the HUD letter to the City enumerating the civil rights findings.

In an October 31 letter from Michael Allen, an attorney with Washington D.C. law firm Relman, Dane & Colfax, PLLC, TxLIHIS asked HUD to not accept certifications from either the City of Houston or the Houston Housing Authority that they are complying with civil rights laws, since HUD has found that they are not in compliance.  Certifications of compliance with civil rights laws are requirement for governmental units to receive funding from HUD. Read the letter to HUD.

The letter asks HUD to act to resolve the outstanding violations with the City and housing agency immediately.  If the matter cannot be fully resolved immediately, it demands that HUD declare all certifications by the two agencies inaccurate by November 30.

John Henneberger, co-director of TxLIHIS said, “No governmental body and no political leader has the legal authority to defy the requirements of the Civil Rights Act. HUD, acting as the enforcement agency for this law, has found this is what is going on in Houston. HUD issued its findings eleven months ago and it is past time for HUD to enforce and for Houston to comply with the law. It is completely within the power of the city and housing authority to stop denying Houston residents of subsidized housing the option to live in non-segregated neighborhoods. We demand that HUD, the City and housing authority act now to resolve this matter in order to prevent an interruption of federal funding, including badly needed disaster recovery funds.”

TxLIHIS also filed a new complaint with HUD claiming that the failure of the City of Houston to provide storm water infrastructure and flood plain protections for predominantly minority neighborhoods is discriminatory. Improperly engineered open storm drainage ditches, locating affordable housing in flood plains and the failure to assure equal flood protection exposes residents of these neighborhoods to repeated displacement during floods, loss of personal property, exposure to mold and environment contaminants, and increased exposure to diseases spread by floodwater.  These problems have been raised publicly and repeatedly by TxLIHIS and others with City of Houston officials, and are documented by the City’s own study of drainage infrastructure, but have not been remedied by the City. Read the request for a HUD investigation of Houston’s storm water infrastructure.

As the City of Houston and the Houston Housing Authority move forward with their plans to assist millions of people to recover from Hurricane Harvey, it is essential they address the City’s tragic legacy of residential racial segregation and the unfair provisions of essential public services between majority white neighborhoods and neighborhoods of color.

All Houstonians deserve a city that affords its citizens equal protection and opportunity and provides families who live in subsidized housing a choice of neighborhoods and apartments that suit their needs. No housing agency, no public official, and no group of neighbors holding a bias should be permitted to stand in the way of this basic individual civil right.

The law is clear. It must be enforced. Federal funds – including disaster recovery funds – may not be used by local governments to perpetuate the continued violation of their citizens’ civil rights.