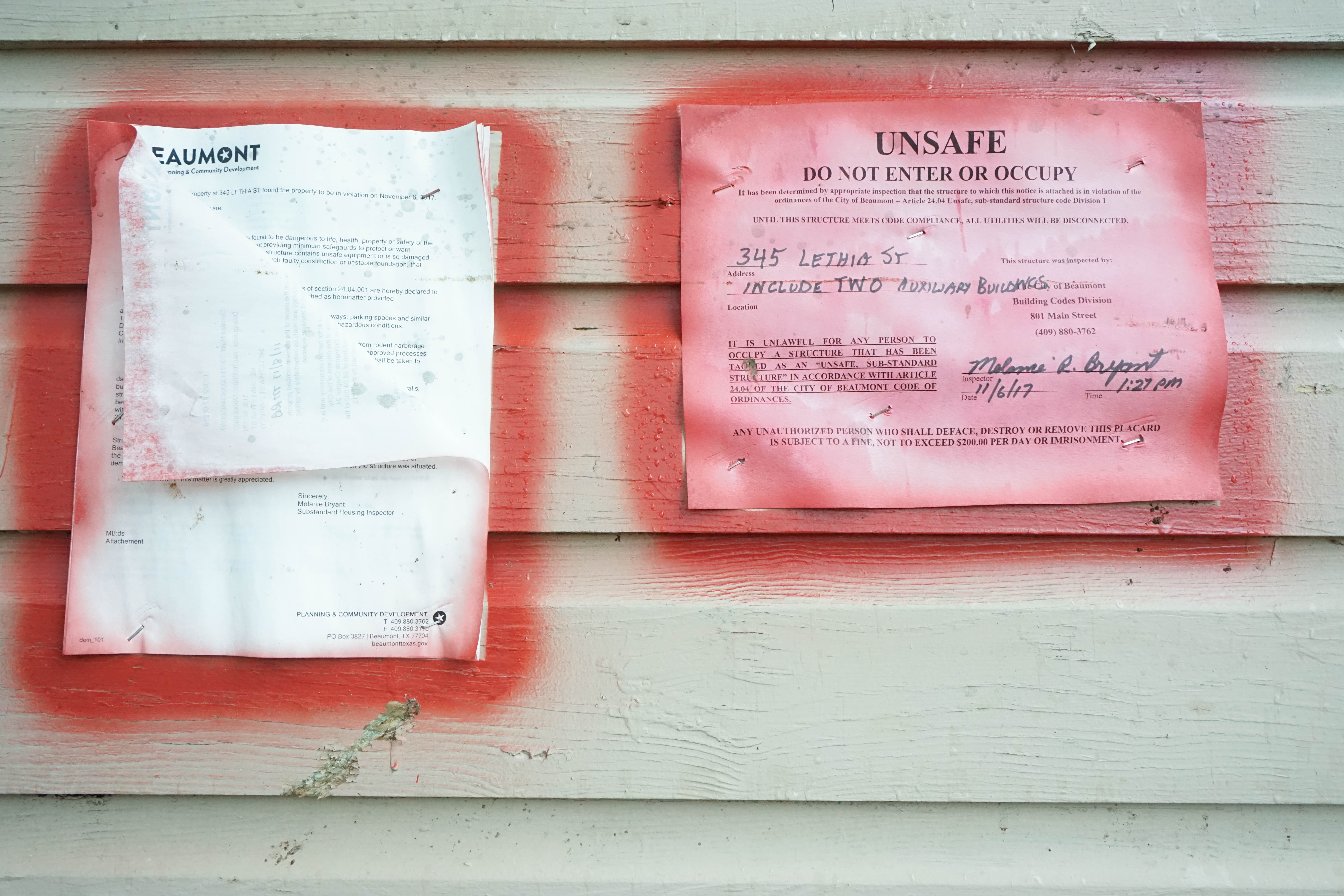 Clinton McNair is on a mission.  Five months after Hurricane Harvey battered Texas’ Golden Triangle, the community navigator and Beaumont native is looking for displaced survivors who have fallen through the cracks of the recovery process.  Working with community contacts, churches, and public officials McNair is chasing down leads on area residents whose lives were upended by flooding from the historic storm.

In December, a report from the Kaiser Family Foundation and Episcopal Health Foundation provided the first data-backed clues that Golden Triangle communities (the area around Beaumont, Port Arthur and Orange) were in dire straits post-disaster.  According to the Report, a quarter of Golden Triangle residents were displaced from their homes and 47 percent of Golden Triangle respondents said they needed help applying for disaster assistance.

On a recent rainy day, McNair drove through Beaumont’s Pine and Blossom neighborhoods to see if any residents had returned home.  Houses in the area were flooded twice – first, when the storm’s heavy rains breached a bayou and again by the release of water from a nearby reservoir.  Outside one severely damaged house, McNair noted the name of the homeowner on a city-issued “do not enter” order.  “That’s whose name the house is in according to the city,” he says. “It may or may not have been who was living here when the flood came through, but it’s a start.”

With many residents leaving their severely damaged homes and the neighborhoods seemingly half abandoned,  getting a neighbor to corroborate the resident’s information is tricky.  Armed with a name, McNair can go back to his network and try to find out more about the status of the homeowner.  If that doesn’t turn up any leads, he’ll call hotels where Harvey survivors are still being housed.  “It does feel like hunt, kind of” McNair says, “it’s a lot of work to find people, especially if they were in vulnerable situations before the storm”.

That afternoon, walking into a local soul food restaurant McNair is greeted by the head chef, an old acquaintance.   As he tells the chef about his efforts to find and support low-income Harvey survivors post-disaster, she pulls him aside to share the story of her friend, who had been in the restaurant earlier that day.  Her friend, she says, didn’t get much help from FEMA and is the sole caretaker for her disabled adult son. This winter, as a result of the stress of displacement, her son was hospitalized and she shuttled back and forth between the hospital and a hotel.  While watching over their son and trying to figure out more permanent housing, the woman’s husband suffered a massive heart attack and died.  “They’re still needing help” she adds, “it’s been an awful, stressful time.”

McNair pulls a notebook from his front pocket and, without breaking eye contact,  jots down his information to pass along.  “I’m really glad I ran into her,” McNair says “we know recovery isn’t going well out here. It’s like people disappeared (post-storm); they’re scattered all over the place – lost homes, lost jobs, illnesses.”

Later that day driving the 20 miles of road that separates Beaumont from Port Arthur, McNair explains some of the differences between the two cities. Port Arthur is the home to the largest oil refinery in America, but the wealth from the refinery hasn’t spread through the community.  A quarter of the city’s residents live at or below the poverty line.  In the last 12 years the coastal city  has been in the paths of Hurricanes Rita, Ike and Harvey, each of which caused significant damage.  Winding through a residential neighborhood McNair tilts his head toward a mattress and kitchen cabinets piled on a front lawn, “some of this stuff is recent.” According to McNair, some residents are just now able to return from post-disaster housing far away, while others are working bit-by-bit as they get the funds together.

Now that FEMA applications have closed and long-term recovery money is starting to flow to Texas, McNair’s work advocating for low-income survivors trying to make sense of the complicated recovery process has developed a special urgency.  The Golden Triangle has already been passed over by Texas’ draft State Action Plan which did not allocate any of its $58 million to the region. Granted, this is just an initial allocation. Billions more are on the way. McNair’s job is to make sure East Texas is not passed over. The $90 billion recovery package approved by Congress for states and territories hit by Hurricanes Harvey, Irma, and Maria is quickly being divvied out to large infrastructure projects. For example, $15 billion has already been earmarked for a large scale study of the Houston area by the Army Corps of Engineers.  Meanwhile, homeowners and renters in the Golden Triangle are languishing in hotels and campers that have been donated or purchased out of pocket.

In that same neighborhood McNair meets an elderly woman named Tee.  Tee says when she got out of bed the morning Port Arthur began to flood that the water reached her chest.  After spending months in her backyard camper, she’s glad to be back in the house.  “I’ve had cancer and it was so cold in there this winter.  I got one of those electric blankets, that thing saved my life” she muses giving herself a little hug.   Asked if she wants to stay in her home, having just paid out of pocket for a contractor that left a trail of mistakes behind, Tee flatly replies no.   By way of explanation she gestures around her home adding,  “I’m just done with it. I’m tired.  I want to get rid of it.”

1 comment on “Navigating the Golden Triangle five months after Harvey”