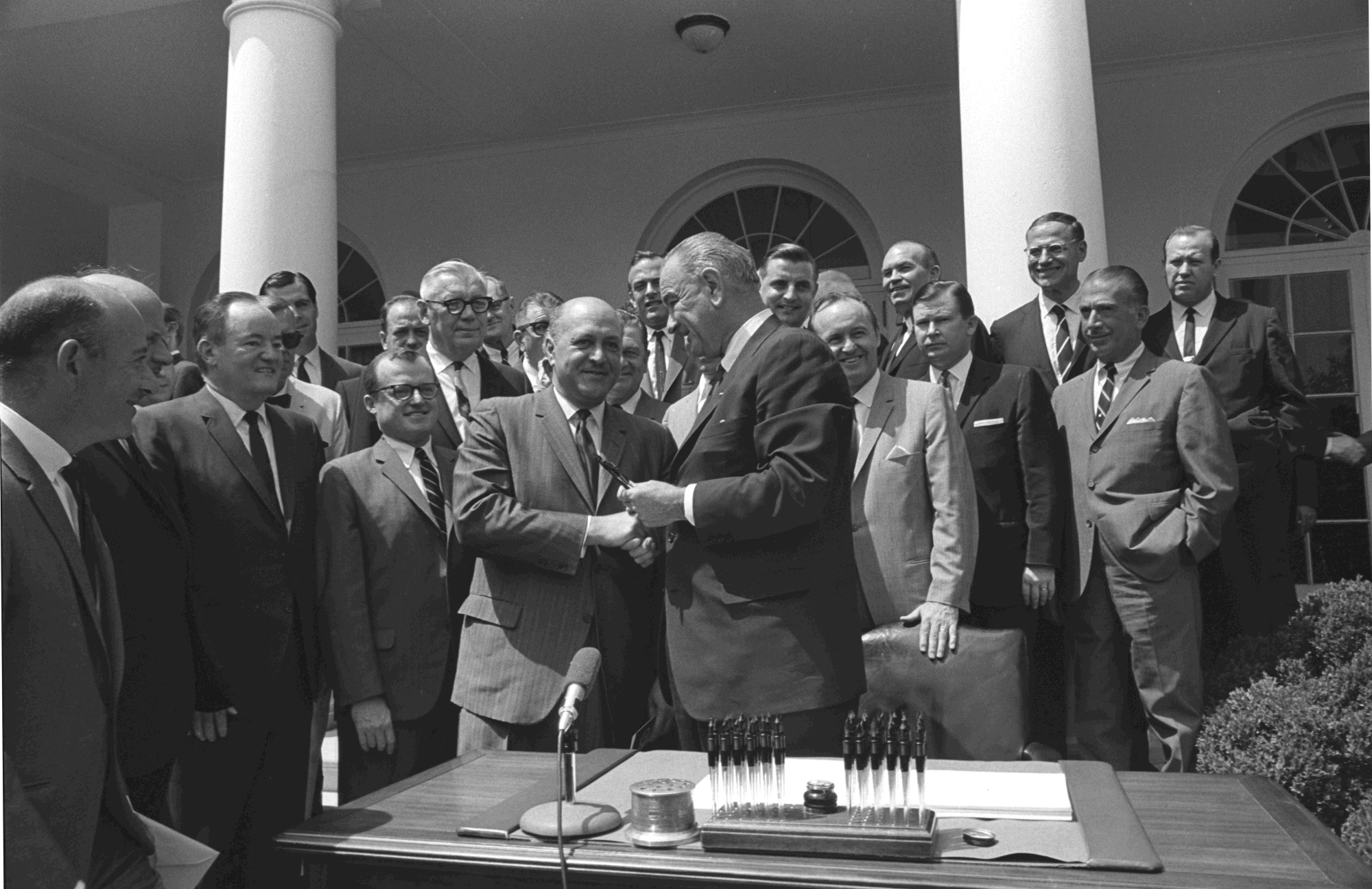 (Photo above: President Lyndon B. Johnson signs the Department of Housing and Urban Development Act in 1965)

In the face of continued housing discrimination and continued segregation of cities, U.S. Department of Housing and Urban Development officials are proposing a change in their mission statement that could signify that the federal housing agency is taking its focus off of fighting these ills.

The U.S. Department of Housing and Urban Development was created in the 1960s, during an era when landlords and mortgage lenders systematically shut out far too many people of color from renting or owning a decent home.

Still, in 2018, people of color, families, people with disabilities and other protected groups continue to contend with discrimination. For the most part, it is more subtle than it was before the 1960s, but segregated communities, an expensive loan or a denial of a mortgage, and landlords refusing to accept housing vouchers can devastate the lives of families, children, and whole communities. It is HUD’s job to ensure that these individual and systematic acts of discrimination don’t.

Earlier this week, news outlets reported that HUD officials are considering taking anti-discrimination language out of its mission statement in order to “align HUD’s mission with the Secretary’s priorities and that of the Administration,” according to a leaked HUD memo.

HUD proposes to change the mission statement from this:

“HUD’s mission is to create strong, sustainable, inclusive communities and quality affordable homes for all. HUD is working to strengthen the housing market to bolster the economy and protect consumers; meet the need for quality affordable rental homes; utilize housing as a platform for improving quality of life; build inclusive and sustainable communities free from discrimination, and transform the way HUD does business.”

“HUD’s mission is to ensure Americans have access to fair, affordable housing and opportunities to achieve self-sufficiency, thereby strengthening our communities and nation.”

The substantive differences are the lack of anti-discrimination and inclusion language in the new proposed mission statement, and the addition of “self-sufficiency,” not surprising considering Secretary Carson’s conservative stances on housing. The secretary has also stated that he believes that policies that promote integration and inclusion are “social engineering,” suggesting that segregation is natural. The are harmful statements in and of themselves — but what is worse is that they are coming from the person who leads the agency charged with addressing these issues.

While Secretary Ben Carson insists that suspicions that HUD is shirking its fair housing and anti-discriminatory duties are false, his previous statements and actions say otherwise.  The federal agency under his leadership has shown that inclusive communities and addressing problems that policymakers created are not a priority. The fact that HUD delayed implementation of an Obama-era rule that required all HUD grantees (mostly local and state jurisdictions) to understand patterns of segregation and make plans to address is an example of this. Studies have shown time and time again that integrated neighborhoods are good for children and good for communities. They help equalize access to good schools, good jobs, safety, and security.

HUD must still abide by its legal obligations. Congress created the agency to address the barriers people of color and people with disabilities must overcome to live in a decent home and thrive. The change in the agency’s mission statement is a signifier that it may begin to unravel progress made in the last 50 years in housing opportunity.

After this administration, the trajectory of progress is likely to continue, despite the stalling. But communities cannot afford to take any steps backward. The lives, health, and opportunities of families and children depend on that continued progress today. HUD has a lot of work to do to address and rectify centuries of government-made policies that continue to have a real impact on communities of color. Cities, families and children cannot afford a shift in attention from that work.