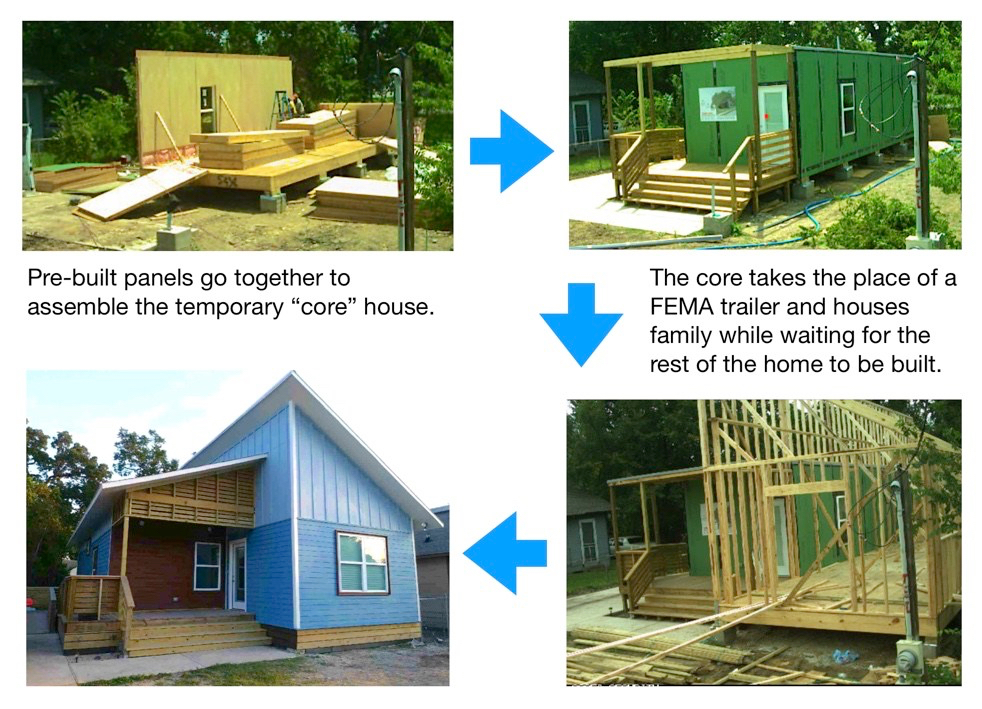 Since 2005, when we witnessed the federal government’s catastrophic failure to provide a just and equitable recovery for survivors of Hurricane Katrina, some of us have been focused on developing a better government response to natural disasters. Working closely with the State of Texas and local government officials in recovery efforts around Hurricanes Rita, Dolly, Ike and Harvey, a lot has been learned about what does and what doesn’t work.

We are here today to report what we have learned and celebrate a better way to recover from disaster.  We are also here to join one beautiful family’s triumph over the devastation of Hurricane Harvey.

After fourteen years, four major hurricanes and several billion federal dollars spent for disaster recovery, what we learned boils down to five things:

3) Disaster recovery gets around to helping the lowest-income survivors last. Then it fails to afford those it does help the dignity and agency to play a role in their own rebuilding process;

4) Too many survivors of color are forced to rebuild homes in distressed and environmentally hazardous places rather than being provided a choice to move to safer places offering a better quality of life: and

5) Government seems always unprepared for the next disaster because it fails to plan in advance to apply the lessons from the past.

Today, through the process used to rebuild this home, we take a major step in applying these lessons to make future disaster rebuilding faster, fairer and more equitable.

This home was constructed using a comprehensive approach we call RAPIDO. It is actually the fifteenth design variant built over the past fifteen years using this approach. Each of the homes built over these years has been modified based on the lessons we learned in the previous homes. This home is the first continuously occupied by a family from the small “core” part of the home to the final, expanded, fully built out home.

With the lessons learned and the successful completion of this home today, RAPIDO is now ready to move to large scale use in future disaster rebuilding.

The key design elements of this house are an important part of what makes it work, and we’ll talk about those in a minute.

We need to understand that a lot more goes into achieving an efficient and equitable disaster recovery than the design of a house. Progress has recently been made in these other areas that can now make disaster recovery at long last work.

After trying for six years to change state law to permit local governments, who want to pre plan for disaster recovery, the Texas Legislature last month finally passed legislation and Governor Abbott signed it this past Monday that makes this possible. Local governments along the Texas Gulf Coast will soon be able to develop long-term recovery plans based on proven practices such as RAPIDO. The plans will be prepared by local government officials assisted by the disaster recovery experts at Texas A&M University’s Hazard Reduction and Recovery Center. These local plans will be submitted to and reviewed by the State of Texas and modified and approved as necessary to conform to federal and state laws.

What this means is that the next time disaster hits, the carefully developed, pre-approved local recovery plans can be immediately implemented without the long planning delays that have plagued previous recoveries. This can reduce the past multi-year rebuilding startup delays to a matter of only a few weeks. Most important, this pre-disaster planning allows the state and local government to apply the lessons of previous disasters prospectively to future disasters.

We are also on the cusp of the federal government taking up a landmark disaster recovery bill that can finally provide coordination of the two funding sources for disaster recovery: FEMA funds and HUD Community Development Block Grants. Our federal government’s failure to coordinate these two funding sources results in FEMA making large expenditures to temporarily house disaster survivors and patch up homes that later end up being demolished and rebuilt many months later when HUD funds become available.

If Congress mandates that these agencies coordinate and sequence their programs RAPIDO can work to save money and help rebuild more homes. FEMA funds can be used to build a part of a home to provide immediate housing that can later be incorporated into the permanent complete home finished with HUD funds. This is what the RAPIDO house two stage, or “temporary-to-permanent” approach is all about. We estimate this approach could rebuild one-third more homes for the same amount of money the federal government is now spending.

Making these funds available to assist more disaster survivors is a big deal. Past disaster recovery programs have done virtually nothing to provide for disaster survivor families who rent. If we can increase the number of families we can assist with the same money we now spend, for the first time disaster survivors who are renters with low-incomes can be supported to find a way to own an affordable home in a good, safe neighborhood. Scenacia, the owner of this home was herself a renter at the time of Hurricane Harvey.

These legislative changes have been a long time coming.

Returning to the RAPIDO home model, it too has been a long time under development. With the opening of this home in Houston, this model for housing rebuilding is finally ready for large scale deployment. Today we ask the State of Texas and local governments to use the authority granted in the new state and federal legislation to pre-plan to use this rehousing approach for the next disaster.

To understand this, we need to see the RAPIDO home through the experience of the family who owns this house.

Scenacia is a single mom with two children. Nnaja her 12 year-old daughter and Nygel her 10 year-old son who has significant special needs. As Scenacia struggled to meet the extreme care needs of her son and raise her family, she found herself going from rental housing to living in a Houston shelter at the time Hurricane Harvey hit. Their furniture, clothes, appliances, toys, everything they owned were in storage while they were living in the shelter. Harvey’s floodwaters inundated the storage facility, ruining all their worldly possessions. Tragically, as is the experience of most renters, FEMA did not provide Sencia’s family any substantive help.

Over the past years, we constructed a number of model RAPIDO homes to test designs, construction techniques and establish costs.  All this looked good. But we never actually had a disaster survivor family live in the core part of the house while the rest of the home was built around them. We needed to know what that experience would be like and if it would work. A partnership came together of bcWorkshop (the architects), Enterprise Community Partners (a national non-profit policy organization), the Texas Organizing Project (that was able to put together some funding), Covenant Community Capitol (who agreed to oversee construction of the home), and Texas Housers (who worked with Sencia and family and who documented the process).

The idea that a family will temporarily live in a core of the home is where RAPIDO accommodates the complexities of government requirements. FEMA funds are available just days after a disaster strikes. But under federal law right now, FEMA can only provide temporary housing. Temporary housing funded by FEMA often ends up costing a lot of money.  FEMA frequently spends $100,000 or more to buy and set up a travel trailer for temporary housing. FEMA also funds hotel/motel vouchers that pay large amounts for survivors to live in cramped motel rooms for many months. Both of these temporary housing solutions contribute not one cent to a family’s permanent housing solution.
Within a week or so of a disaster striking, RAPIDO builds a small “core” structure on the property. The core can be built in three days. It is slightly larger than a FEMA trailer. This “core” is a temporary home for a family until the HUD CDBG funds are appropriated and available to the state and local governments to build the rest of the home. But it is also a permanent part of the final house. This is where a huge cost savings comes from. Instead of buying and disposing of a FEMA trailer or paying for hotel and motel rooms for months, that money is used instead to temporarily house the family in a neighborhood and the CDBG is used to build the rest of their permanent home around this core.

The core of Scenacia’s house, where her family lived for six months, was built on this lot, which was then vacant, held by Covenant Community Capital. The core was tight but, as we hoped, it turned out to be livable, aided by Scenacia’s family’s positive attitude and their knowledge that a large new home was coming at the end of this process. Elaine Morales, the architect for bcWorkshop, and J.T. Harechmak of Texas Housers monitored and troubleshot the experience of the family in the core over the temporary period. We learned valuable lessons about permitting considerations, the pre-fabricated building panels, heating and cooling requirements, staging construction during periods of heavy rains and modifying a house for accessibility for a special needs family member.

The core itself is designed in multiple interlocking wall, roof and floor panels. The panels are built and stored prior to a disaster offsite and then brought out and assembled like the pieces of a puzzle in three days. With the encouragement of the City’s Housing and Neighborhoods Department, the Houston Code Department accommodated our unprecedented incremental building approach.

This being a test house, we went down a few wrong roads and redid work that, in the future, will not have to be redone because of what we have learned with this test home.

What do we think the house will cost in production? Probably between $125,000 and $160,000 depending on local supply and labor costs. Significant savings in the range of $20,000 to $30,000 can be achieved if faith-based organizations contribute voluntary labor such as fabricating panels and assembling the cores. More can be saved with voluntary labor or owner self-help in building out the remainder of the home.

Keep in mind, in addition to these cost savings, we are also saving around $100,000 on each home by eliminating the cost of a FEMA trailer or hotel/motel costs.

One of the most important lessons we learned through fifteen test houses is that reduced cost, rapid recovery from a disaster requires advance planning and coordination between government entities from survivor qualification, owner decisions in home design, financing, permitting and final inspection. This is why the new state and federal legislation providing for advance local planning and program coordination between FEMA and HUD is critical.

Another important lesson is that disaster survivors need the power to make decisions over their recovery. In this sense, the location of the home, the financing, the design and other aspects of the home need to be things survivors have a say in – not a dictate of a government program.

One critical example are the careful decisions Scenacia made to make the design accommodate her son’s needs. Another critical example is the decision by Scenacia about what she could afford. In the case of this home the cost of Scenacia’s payments are much lower because the land is placed in the Houston Land Trust. Through this, the cost of property taxes on the land will remain affordable over the long term.

This brand-new home is historic. This is the first of a more humane, efficient, respectful, equitable approach to disaster recovery. It is an answer to the governmental failures in the aftermath of Hurricane Katrina. This home points the way toward a brighter future for Scenacia and her family, our community and our nation.