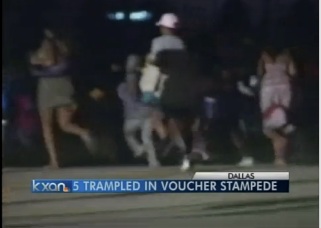 Bo McCarver’s housing news clips posted on this blog this week has a story from the AP headlined, “Early morning stampede for hard-to-get vouchers.” It is a sad commentary about the unmet need for affordable housing on the part of people with low-incomes and the way poor people are treated by some public housing authorities.

The Dallas County Housing Authority announced it would accept applications for Housing Choice Vouchers to help poor families pay their rent. It was the first time in years the county has taken applications for the waiting list.

About 5,000 were expected to make application for a relative handful of vouchers becoming available. People who wanted help with their rent began arriving the day before the applications for the waiting list were  taken. In the early morning, three hours before the doors opened at the South Dallas stadium, the crowd rushed the doors in a desperate effort to get a low-position on the housing agency’s waiting list.

Video on Dallas television stations shows hundreds suddenly sprinting to the building with a few people pushing to the front. Some suffered minor scrapes and bloodied knees in falls and at least one pregnant woman was reportedly trampled.

This represents, first, poor planning on the part of the housing agency. Proper management and security provisions are essential when people queue up all night to be the first to apply for a limited commodity. Consider what happened with the crowd outside the Wal-Mart store on Black-Friday in 2008

A Wal-Mart worker died early Friday after an “out-of-control” mob of frenzied shoppers smashed through the Long Island store’s front doors and trampled him, police said.

The Black Friday stampede plunged the Valley Stream outlet into chaos, knocking several employees to the ground and sending others scurrying atop vending machines to avoid the horde.

When the madness ended, 34-year-old Jdimytai Damour was dead and four shoppers, including a woman eight months pregnant, were injured.

Wal-Mart had to develop new policies for crowd control and pay a large settlement to avoid criminal charges for their poor crowd management. I’m not here to excuse people who trampled other people but this situation should have been anticipated and could have been avoided. I’m betting no one does anything to change the Dallas Housing Agency’s practices, however. That is because these were desperate poor people trying to get severely rationed public assistance and there isn’t much sympathy for desperate poor people.

Dallas County should look at the better system for taking names for housing voucher waiting lists in place in Fort Worth. A story about this better approach is also found in this week’s housing news clips.

Instead of making people stand in line for hours or days, in Fort Worth all applications are submitted online and entered into a lottery to determine which applicants get vouchers.

Fort Worth Housing Authority officials hope the new system makes the process more efficient and user-friendly for applicants, who will no longer have to scramble to submit their applications immediately, said Selarstean Mitchell, vice president of assisted housing.

“We want everyone to have an equal chance,” Mitchell said. “We find that with first-come, first-served, people who are not as mobile tend to be at a disadvantage.

All of this begs the question of why a chance for poor people to afford a decent home is such a rare and rationed commodity.