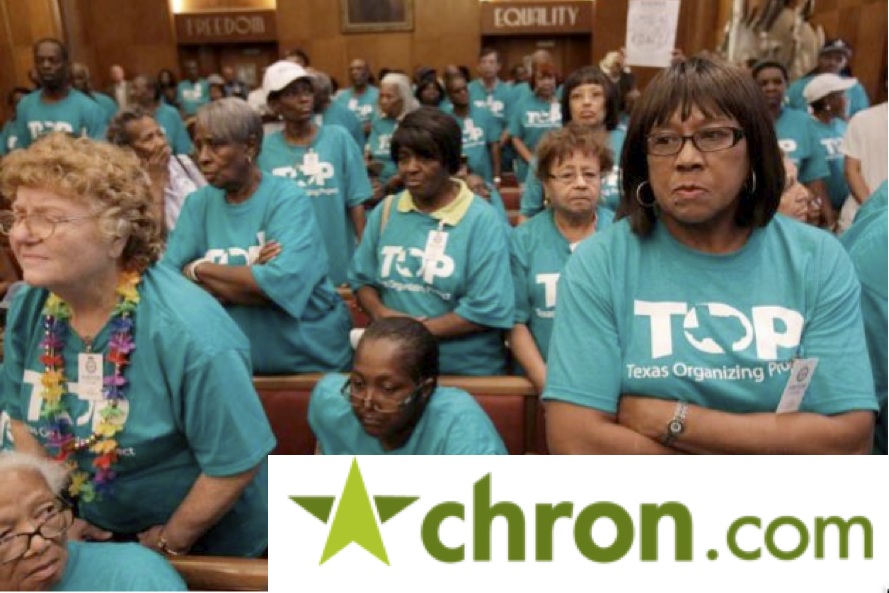 Bearing photos of homes that still have blue tarps on the roofs, more than 100 protesters held a rally at City Hall on the third anniversary of Hurricane Ike on Tuesday and pleaded with the City Council to accelerate its repair program.

“I’m tired of the city telling me to be patient,” said Elvis Malveaux at the rally. “You try living under a blue tarp and be patient!”

More than 2,300 people are on a waiting list seeking government assistance to replace or repair their Ike-damaged homes. So far, the city has rebuilt or is rebuilding 71. It plans to have 242 homes done by the end of 2012.

City officials had a don’t-shoot-the-messenger response to the protesters. The first round of federal disaster relief money was delayed by the state, city housing spokesman Marc Eichenbaum said. And the state changed the rules midstream, forcing victims to reapply for aid, he said.

The Texas Organizing Project, an advocacy group for low-income people that coordinated Tuesday’s rally and the packing of the City Council chambers, maintains that the city has poorly managed those limited resources.

Houston allocated most of its first batch of $109 million on apartments, spending that generally benefited higher-income people than those who qualified for single-family repairs. And when the city last month showcased the first homes built to replace those wrecked by Ike, a state inspector discovered that contractors had neglected to install insulation in one of them.

“It’s like being valedictorian of summer school to be celebrating 242 homes,” said Ginny Goldman, the organizing project’s executive director.

The group took its fight to City Hall in hopes of influencing how the city decides to spend future disaster money in applying for a second installment later this year. Its members are demanding that every penny be spent on home repairs rather than on apartments or non-housing purposes.

It also called for an oversight board to audit the spending of the city housing department’s current repair program and to find ways to spend the next round of money more quickly and efficiently.

Representatives of the city and the state General Land Office, which took charge of the distribution of disaster recovery money on July 1, said Houston’s share of second-round funding is undetermined.

Check the link below to read the whole story in the Houston Chronicle.