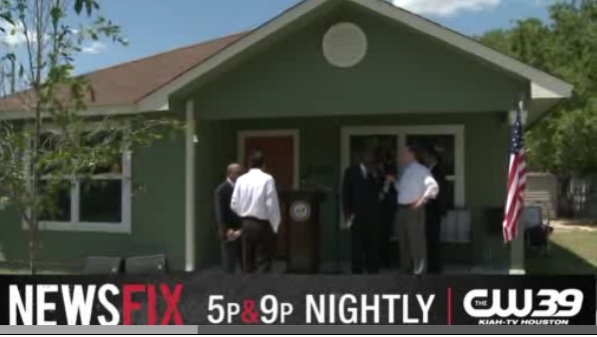 After months of delay in getting its housing repair program under way, Houston’s housing department was eager last month to show off the first batch of new homes built to replace those damaged by Hurricane Ike.

But one of the homes wasn’t quite finished when it was turned over to the homeowner. The contractor neglected to install insulation.

The glaring oversight has raised concern among homeowners who, in some cases, have been waiting nearly three years for the city to repair or rebuild their damaged homes.

The home in question belongs to Mary Porras, who lives in the 4000 block of Lila. The elderly woman moved in Aug. 4, welcomed by Mayor Annise Parker and housing officials with gifts and a ribbon-cutting ceremony.

Porras, who is in the hospital, could not be reached for comment Friday.

City housing director James Noteware said the error should have been caught before Porras moved in. He said the city has conducted additional inspections on the homes built by the contractor and found no problems.

“We do more than $100 million in construction every year,” Noteware said. “Oversights and errors are made. We were made aware of the problem and corrected it. I wanted to make sure similar errors were not made in this batch and others in the pipeline.”

Homeowners can be assured that the 242 homes to be repaired or rebuilt with federal funds will be properly built and safe, he said. The city received $87.2 million in disaster relief funds, of which $9.4 million has been set aside to repair single-family homes.

But officials with the Texas Organizing Project, a community group that represents residents of several neighborhoods hit hard by storm damage, said similar issues have surfaced with city home repairs in the past. The group, which has pushed the city to move faster in spending the disaster relief money, is calling for the mayor to appoint a task force to hold the department more accountable.

Since starting the housing program nine months ago after federal officials granted an extension, the city has repaired or replaced 24 homes and has 47 homes under construction. It is reviewing about 750 applications.

An inspector with the state General Land Office, which oversees the disaster relief program, found the problem at Porras’ house Aug. 11 and contacted the city, said Marc Eichenbaum, spokesman for the city’s Housing and Community Development Department.

The builder, General Contracting Services, which has a good track record with the city, fixed the problem the next day, Eichenbaum said. The city inspector who failed to spot the problem was suspended without pay, he said.

The builder, who received a contract to build five homes under the housing program, hired a subcontractor to install insulation. Apparently, the subcontractor missed Porras’ house, Eichenbaum said.

Jorge Ramirez, the GLO’s director for disaster recovery, said the incident was probably a fluke and the agency is working with the city to make sure it doesn’t happen again. He said the homes go through four inspections for quality control.

“The good news is that we got it, so it (the system) works,” Ramirez said. “The state wants to make sure the money is spent as quickly as possible and that homes are built to proper standards.”