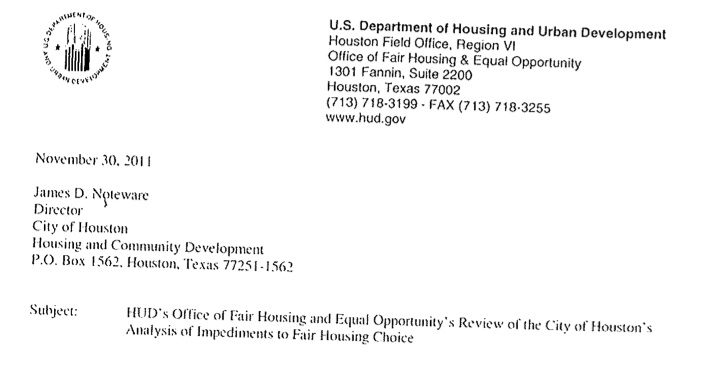 HUD has rejected the City of Houston’s fair housing plan known as the Analysis of Impediments to Fair Housing (AI). The City is required to produce and carry out a plan to “affirmatively further fair housing” as a condition for receiving federal funds for housing and community development.

In a letter we obtained under the Freedom of Information Act dated November 30, 2011, HUD wrote to James D. Noteware, the then director of the City of Houston Housing and Community Development Department…

The city’s AI is incomplete and unacceptable because it fails to identify and address patterns of segregation based on race and national origin, identify appropriate actions to address identified housing discrimination, address access to housing and services for persons with disabilities and persons with limited English proficiency: it fails to contain actions to address the impediments it does identify and it lacks references to maintaining documents and records to document its actions in addressing the identified impediments.

I cannot recall another instance in which HUD has rejected a Texas city’s AI.

The implications of this are quite series for Houston. In making application for and receiving federal grants, the mayor has submitted certifications to HUD attesting…

In finding the City has failed to comply, HUD notes that, “The city receives a substantial amount of money from HUD and engages in actions that are related to housing and urban development and therefore, is required to affirmatively further fair housing.” The letter specifically identifies $138,182,762  HUD grants to the City of Houston over the past two years.

As part of the obligation to affirmatively further fair housing, the city is required to prepare an analysis of impediments “AI” to fair housing choice; take actions to overcome impediments; and maintain records of actions taken.

After review of the Houston AI, the Department has determined that the AI’s analysis is incomplete. The AI is incomplete because:

2) The AI does not specify an appropriate strategy or actions to overcome the shortage of affordable housing for African-Americans, Hispanics, persons with disabilities, and families with children.

3) In addition, the AI does not identify any funding directed by the city toward fair housing enforcement 2010 or enforcement–related activities such as testing for nor is such funding proposed for subsequent years although high levels of discrimination were identified as an impediment to fair housing in the AI.

HUD’s letter to the City is below.