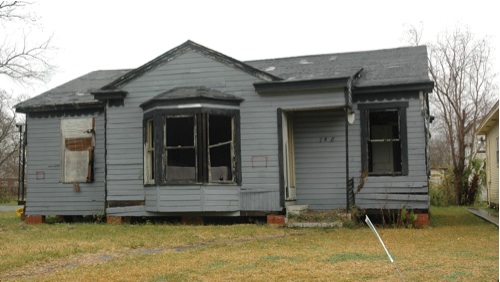 According to a State of Texas report covering the period through January 31 2012, only 38 percent of houses destroyed by Hurricanes Ike and Dolly and contracted to be repaired by local governments have been completed. A second, far larger round of Community Development Block Grant Disaster Recovery funded home repair contracts are expected to be awarded to many of the same local governmental contractors in next month.

The City of Houston, having already received a contract extension in response to its slow rate of home repairs, has the poorest rate of performance, completing only seven percent of the homes it contracted with the State of Texas to rebuild. The City of Galveston has the largest number of uncompleted homes, 907, with its contract set to expire on September 10.

In setting up the disaster rebuilding programs, Governor Perry insisted on local governments being in control and administering the disaster recovery funds rather than a centralized contracting process used by the State of Texas for rebuilding after Hurricane Rita. The centralized administrative approach under Rita provided far lass expensive and faster rebuilding. Magnifying the problem created by the slow current rate of Hurricane Ike and Dolly rebuilding is the impending release of a massive second round of housing reconstruction funds that will be administered by these same local governments.

The Texas General Land Office has begun to put in place revised rules and procurement procedures that are badly needed to improve program performance. But it is clear that these local jurisdictions are so far behind in completing the first round of houses there is no way many will be able to complete the second round of home repairs in a reasonable amount of time.

We pointed out this problem to the State of Texas almost two years ago. In reaching a Conciliation Agreement with Texas Low Income Housing Information Service and Texas Appleseed over problems with the administration of the first round of these funds the State of Texas agreed to take steps to address the problem in the second round of Ike/Dolly funding. The requirement provides:

TDHCA [the State of Texas administer of the funds] shall require Recipients [local governments administering programs] to adhere to expenditure performance requirements with respect to the applicable Hurricane Recovery Funds used for housing and to submit to performance evaluations of their expenditure rates every six months during the term of this Agreement. TDHCA’s proposed performance standards shall be set at a level of incremental expenditure to reasonably assure that, within a period of no more than eighteen months from the date of the commencement of the Program. each Recipient will have identified sufficient eligible beneficiaries such that the Recipient will be able to provide reasonable assurance that the Recipient will be able to expend all applicable Hurricane Recovery Funds utilized for housing in compliance with TDHCA-established benchmarks. TDHCA will require each Recipient to ensure that expenditure of those committed funds is in compliance with TDHCA-established benchmarks. If a Recipient is unable or unwilling to administer its allocated Hurricane Recovery Funds in compliance with TDHCA’s benchmarks, the COG in which the Recipient is located will determine, in a manner acceptable to TDHCA, whether the COG or another eligible provider with demonstrated capacity will assume responsibility for the administration of those Hurricane Recovery Funds for the same purposes and for the benefit of the same beneficiaries. If the COG and TDHCA cannot find a mutually agreeable administrator, TDHCA agrees to administer a Program to carry out those responsibilities.

TDHCA shall provide the proposed expenditure performance requirements for public review and comment fifteen (15) days before they are approved by TDHCA. TDHCA will provide a written response to any public comment.

We will be closely reviewing these proposed performance schedules for the second round of funds and will work to ensure that they require greatly accelerated rates of home reconstruction from the current abysmally slow rates. We will also seek to ensure that, once established, the performance standards are enforced.

A lesson needs to be learned here. Texas needs a far more efficient and rapid approach to housing reconstruction for future disasters.