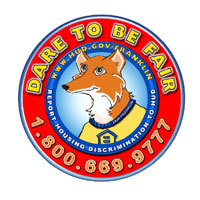 April is Fair Housing Month, the time of year for cities to pass resolutions that no one reads solemnly proclaiming their support for fair housing, the time for elementary school art classes to conduct fair housing drawing contests for children, and the month that Franklin the Fair Housing Fox comes out of his closet at HUD to remind us all of the unfinished business of fair housing.

These efforts in isolation, if not accompanied by action on the part of government and citizens, run the risk of trivializing this significant civil rights issue.

Don’t get me wrong, I like the kids’ drawings. The honesty and lack of prejudice they portray reminds me of the wisdom of John Wayne, portraying Davy Crockett in the movie The Alamo, who said, “It’s kinda a shame kids have to grow up to be people.”

I really do understand the value in educating young people about fair housing.

Focusing our efforts regarding fair housing into a one month blitz of art contests and gratuitous government proclamations extolling fair housing however indicates something is seriously wrong. Enforcement of the Civil Rights Act of 1968, which is woefully lacking, should be serious business — not simply an annual April commemoration.  There would be much more value in cities seriously reviewing what is happening in their local communities, making policy changes and taking enforcement action to address the ongoing practices that maintain the high levels of residential segregation and the ongoing acts of unlawful housing discrimination.

I will state up front that I am not fox hunting. I’m not calling for HUD to put the Franklin suit in a closet and lock the door. I’m sure this is part of a strategy to reach out to kids.

But seriously, you got to wonder what Franklin tells us about the state of Fair Housing.

HUD rolled out Franklin in 2007, under President Bush’s Administration, saying…

In April 2007, the Department of Housing and Urban Development‘s Office of Fair Housing and Equal Opportunity unveiled its first-ever fair housing mascot. Just as McGruff the Crime Dog represents the fight against crime, Franklin, the Fair Housing Fox, will symbolize the nation’s efforts to end housing discrimination.

“The idea is to create a symbol that will help educate the public, particularly our future renters and home buyers, about their Fair Housing Rights,” said Kim Kendrick, Assistant Secretary for Fair Housing and Equal Opportunity. “Our hope is that this mascot will lead to greater housing opportunities for all who call America home, regardless of what they look like or where they were born.”

There probably is a reason we don’t have Anna the Public Accommodations Aardvark promoting the Public Accommodations section of the Civil Rights Act of 1964 or Victor the Voting Rights Vulture to educate us about the Voting Rights Act of 1965. The reason probably is that in this country we take these other two civil rights law as a serious ongoing responsibility.

But man, when HUD let’s Franklin out of the closet each April, that fox can dance…