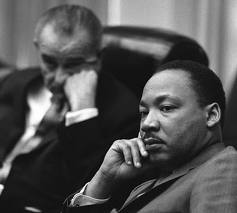 “I never intend to adjust myself to segregation or discrimination.” –  MLK, speaking at SMU in Dallas, March 17, 1966.

What a thrill it is to be able to listen to Dr. King speak before an audience of students and academics at Southern Methodist University. The audience is clearly not a group of civil rights activists. They only interrupt his remarks once with applause. King lays out the problem of segregation, assesses progress and makes a case for aggressive non-violent action to end it.

This is not the soaring oratory of King at the Lincoln Memorial. It is a formal address before an academic audience. It is presented with great clarity of conviction and offers both a moral and rational indictment of the evil of segregation. Forty-eight years after the speech the continued currency of residential segregation makes King’s speech as relevant today as then.

Special thanks to the Dallas Morning News for posting the audio of Dr. King’s speech.

The Dallas Morning News today is a sign of the progress in civil rights that Dr. King described in his speech. in the 1950’s and 1960’s the paper championed segregation. It ignored the problem for another quarter century after that.

But the Dallas Morning News in recent years speaks out regularly and strongly for racial justice.  Earlier this month the paper editorialized for an end to housing segregation in Dallas. The fight is not over but progress is still being made.

Millions of dollars in housing funds are at risk as federal authorities allege that Dallas discriminates in its affordable housing decisions. City Hall must cease and desist from discriminatory practices and find ways to eliminate, rather than reinforce, pockets of poverty dominated by racial minorities.

In a report last month, the U.S. Department of Housing and Urban Development affirmed longstanding complaints by civil rights advocates that Dallas clumps its affordable housing programs in areas already flush with such projects and overrepresented by minority populations living at or below the poverty line.

HUD requires local governments to offer a variety of housing choices without regard to race, religion, sex, handicap or national origin. But it’s hardly a choice when specific groups keep being pushed into the same isolated, downtrodden neighborhoods. Successive court rulings have confirmed that a discriminatory pattern exists, but the city isn’t fixing the problem.

The net effect is a vicious cycle already well-documented by this newspaper:

• Property values in the white-dominated exclusion zones steadily increase, making it more financially difficult for the city to place subsidized housing there.

• Poor people wind up with fewer geographic choices, forcing them into areas already packed with subsidized housing. The income imbalance further drives property values downward and reduces the incentives for people with economic means to reside nearby.