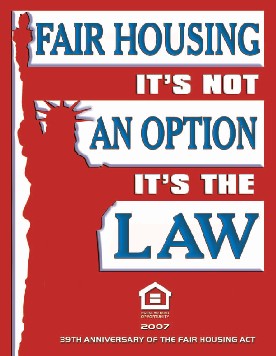 As a whole, Texas has made some real progress toward equal opportunity and fair housing in the forty-six years since the Fair Housing Act was enacted. But for lower-income households of color, progress lags. One major problem is the lack of affordable housing opportunities for African-American and Hispanic households outside traditional high-poverty, racially segregated neighborhoods.

This is one reason Congress passed the Fair Housing Act — to ensure equal opportunity and fair housing for everyone. Government agencies have an opportunity and a legal obligation to address persistent housing segregation when they use public funds to build new affordable housing. There simply is no excuse for government to continue to restrict minority citizens’ subsidized housing choices to segregated, distressed neighborhoods when public resources are available that can offer people a choice of other places to live. Finding a better place to live is one important pathway out of poverty.

While we are not a party to this lawsuit, we are concerned both about the state’s appeal and what it says about the State of Texas’ commitment to equal opportunity, civil rights and fair housing. Many households with lower incomes depend on the apartments created through the Low Income Housing Tax Credit program for a decent, affordable place to live. A large share of families living in tax credit units are African Americans.

In the appeal the Supreme Court will take up, the facts are not in dispute. In the Dallas metro area, over decades the Texas Department of Housing and Community Affairs (TDHCA) awarded many millions of dollars through the Low Income Housing Tax Credit program to private developers to build affordable apartments. Geographic choices of where tax credit units would be located were partly driven by TDHCA’s governing board’s discretion and partly driven by an application scoring system adopted by TDHCA that weighs a number of factors. The result, year after year, was that TDHCA paid developers to build apartments largely in low-income, African-American neighborhoods in South Dallas instead of in neighborhoods that had no subsidized housing, lower poverty and where African-American households were less concentrated.

In March 2012 Federal District Judge Sidney A. Fitzwater, who was appointed to the bench by President Reagan, ruled in the original Inclusive Communities Project vs. Texas Department of Housing and Community Affairs lawsuit that the way the state housing agency awarded the federal housing tax credits in the Dallas area has a “disparate” racial impact, violating §3604(a) and §3605(a) of the Fair Housing Act (Title VIII, Civil Rights Act of 1968). Webster defines disparate as, “markedly distinct in quality or character.”

Judge Fitzwater found that TDHCA had the power to fix this and had to take corrective action to remedy the disparate impact. He noted in his opinion, “Nor is there a basis for finding that TDHCA cannot allocate LIHTC in a manner that is objective, predictable, and transparent, follows federal and state law, and furthers the public interest, without disproportionately approving LIHTC in predominantly minority neighborhoods and disproportionately denying LIHTC in predominantly Caucasian neighborhoods.”

Following the court’s ruling, TDHCA quickly came up with a plan to do what the judge directed. The judge approved the plan. The agency implemented it, and, lo and behold, it worked pretty well. In the past two years, TDHCA has awarded funds to developers to build apartments all across the Dallas metro area, including places where there is no affordable housing, in neighborhoods with good schools, that do not flood, have lower crime, and better access to jobs —for the first time opening up choices to families about where they live instead of continuing to concentrate almost all the affordable housing units in distressed and high crime South Dallas neighborhoods.

This should have been the happy ending of the story. But it is not. Governor Perry and Texas Attorney General Gregg Abbott decided to appeal Judge Fitzwater’s decision in an effort to have the Supreme Court render fair housing enforcement of the Civil Rights Act of 1968 effectively impossible.

Attorney General Abbott’s legal argument is based on the false premise that, “…the widespread application of disparate-impact liability creates incentives for landlords, property owners, and government entities to resort to illegal race-conscious decision making as a way to stave off potential disparate-impact lawsuits. … Nowhere are these incentives more pronounced than in the housing context, where racial quotas and set-asides may be the only way for a potential defendant to prevent litigants from establishing a ‘prima facie case’ against him.”

The attorney general’s appeal ignores decades of actions by the State of Texas that produced segregated African-American apartment projects in high poverty, segregated neighborhoods. The appeal ignores the state’s actions that trap multiple generations of African-American Texans, past and future, in segregated neighborhoods with poor public services and denies families an essential tool for improving their fortunes – the option to choose the community in which to live. The attorney general’s appeal seeks to protect government entities from “resort to illegal race-conscious decision making” yet it fails to acknowledge the undisputed fact that the state itself has largely contributed to the creation and preservation of racial segregation.

Especially significant is that the state’s plan, approved by Judge Fitzwater, that has been in place for more than two years is addressing segregation without establishing any race-based quota or racial set-asides. This is the fact of the case despite the attorney general’s claim in the appeal that racial quota and set-asides are required to address a disparate impact finding.

I wish that the Texas attorney general had balanced his zeal to protect government entities from the imaginary requirement of adopting racial quotas and set-asides against the proven need to protect the interests of citizens from those government agencies denying them an opportunity to choose to live in better neighborhoods.

This is an important case. Attorney General Abbott urges nothing less than the effective repeal of the Fair Housing Act (Title VIII, Civil Rights Act of 1968) through judicial preemption of its principal enforcement tool. So long as they do not explicitly proclaim their intent to unlawfully discriminate, he would permit government agencies to allocate public funds for housing where ever they choose, regardless of the impact on the fair housing rights of citizens and neighborhoods. We have seen the impact of this policy in creating extreme racial segregation, and concentrated poverty in Dallas African-American neighborhoods. The only governmental action the Texas attorney general would consider illegal would be one accompanied by an official resolution that states, “the State of Texas resolves to take the following action to unlawfully discriminate against African-Americans because of their race.” Following the Texas attorney general’s logic, the State of Texas could legally concentrate every low-income, government-subsidized housing development in one county of the state of Texas so long as it did not formally acknowledge it was doing so to unlawfully discriminate.

This is a breathtaking assertion of the power of government over the rights and interests of its citizens. It is totally inconsistent with the prevailing values of Texans – values of limited government power that in other instances are embraced by Texas leaders, including the governor and attorney general.

The Fair Housing Act prohibits discrimination in practice, as well as discrimination by design. It is not in dispute that discrimination in practice occurred in Dallas. Disparate impact has been the law of the land for almost fifty years. In Dallas it worked to help right a wrong inflicted by government policy on African-American citizens – without racial quotas or set-asides. Now, our governor and state attorney general have mounted an appeal seeking to overturn the remedy the state agency has successfully implemented and to also undo a half century of progress in fair housing. The Supreme Court must reject this misguided effort to permit government agencies to override Americans’ most basic civil rights.