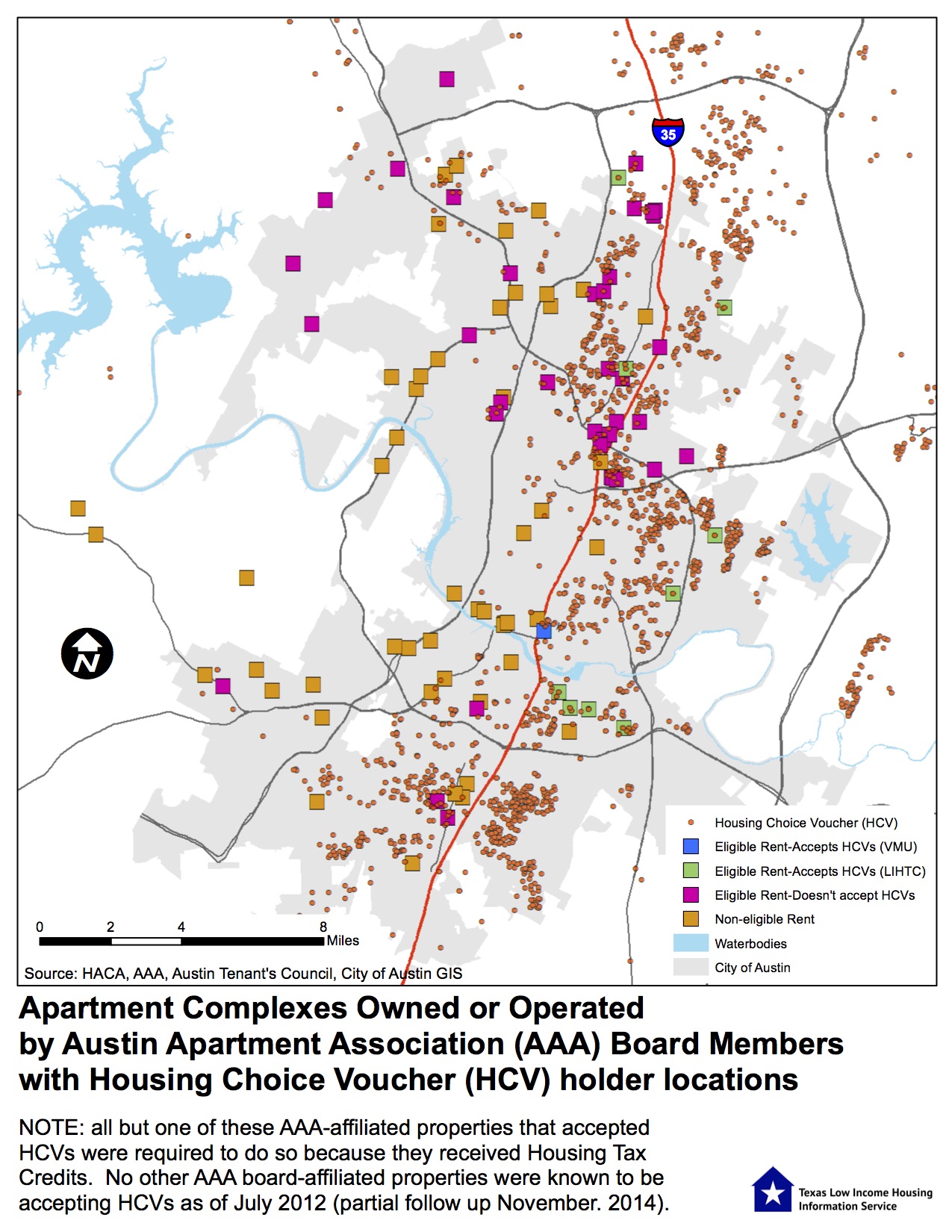 In January, our co-director, John Henneberger, wrote in the Austin American-Statesman about the distressing similarities between Austin’s fair housing battles in the Civil Rights era and today. In 1968, the Austin Apartment Association and other landlord groups stood in strident opposition to a city ordinance that banned racial discrimination in housing. Today, the AAA is the driving force behind a push to overturn a city ordinance that bans discrimination based on a renter’s source of income.

Their lawsuit against the City of Austin has been rejected by both the U.S. District Court and the 5th Circuit Court of Appeals. Meanwhile, the AAA and their affiliates at the Texas Apartment Association are leading the fight in the legislature to ban source of income protection statewide. The first such proposal, SB 267, was voted out of committee on Tuesday – with an amendment that would allow Austin’s ordinance to stand via a grandfather clause.

The rhetoric that fair housing opponents use has hardly changed since the ’60s. And given that more than 80 percent of Austin’s Housing Choice Voucher holders are people of color, the effect of their opposition today is largely the same as it was back then: to keep minority families out of Austin’s white, higher opportunity neighborhoods.

However, the AAA won’t acknowledge the racially exclusive effects of the widespread refusal to accept vouchers, which the ordinance ends. A few weeks after John’s column ran, AAA president Robbie Robinson offered a response in her own Statesman op-ed. Robinson claimed that her association’s position has nothing to do with discrimination. She wrote that it’s “ironic to be criticized for exercising our right to go to court and to our elected officials to overturn this unconstitutional ordinance.”

Setting aside that states and municipalities from North Dakota to Oklahoma and in dozens of other places around the country already have source of income protection on the books, and that several courts have already affirmed those ordinances’ constitutionality, Robinson misses the point. Our disappointment in the Austin Apartment Association is not about AAA’s right to go to court or to lobby legislators. The issue is with their reaction to an attempt by the City of Austin to address the reality of discrimination against voucher holders – namely that it perpetuates racial housing segregation.

According to an Austin Tenants’ Council survey conducted in 2012 and 2014, more than nine in ten Austin landlords of apartment complexes with 50 or more units did not accept housing vouchers. Most voucher holders are people of color. Voucher holders wait years to receive a voucher and then struggle to find anywhere to live, with little choice but to look for housing in racially segregated, economically depressed parts of town. This is the reality of discrimination, a reality in which the AAA’s opposition to source of income protection would continue. Here’s what it looks like:

Without source of income protection, there was a stark contrast between the apartment properties owned and managed by the the members of the AAA’s board (squares) and the locations of voucher housing in the Austin area (circles). The vast majority of the properties that are owned or managed by AAA board members are located in the predominantly white and higher income neighborhoods of west and northwest Austin. Without source of income protection, the vast majority of voucher holders were shut out from those areas and instead concentrated in higher poverty, lower opportunity neighborhoods east of Interstate 35 or north and south of the city core.

Robbie Robinson herself works for IMT Residential, a national apartment operator based in California. The three Austin properties IMT operates are all located in the northwest Austin area, in and around upscale Jollyville and The Domain. The three Census tracts surrounding the IMT properties are 79 percent, 75 percent and 64 percent white – and just 0.6, 7.8 and 3.3 percent African-American. None of the IMT sites accept housing vouchers.

Robinson and the AAA board should be bothered by the fact that they overwhelmingly rent properties in predominantly white neighborhoods. They should care that discrimination has largely kept voucher holders out of those neighborhoods. But instead they have taken an active political stance against an effort to reduce racial segregation, then claim to be baffled as to how anyone could see all of this as a “throwback to the civil rights struggles of the 1960s.”

Austin is the most economically segregated city in the country. It is a city with a deep and enduring legacy of racial segregation, where it’s still immensely difficult for a voucher holder to find housing in an integrated, high opportunity neighborhood. Source of income protection is a step toward fixing that problem. AAA’s position does the opposite – it further entrenches the kind of racial concentrations that already exist around most of the properties the association’s board members own and manage. It furthers discrimination, and perpetuates a racially segregated status quo that has existed in Austin for far too long.