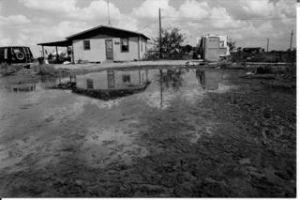 Texas colonia residents have long lived with poor infrastructure, few economic opportunities, and substandard conditions. But a new report suggests that might be changing.

The Federal Reserve Bank of Dallas recently published a report called “Las Colonias in the 21st Century: Progress Along the Texas-Mexico Border” that focuses on infrastructure, housing, economic opportunity, education, and health in colonias in El Paso, Maverick, Webb, Starr, Hidalgo, and Cameron counties. The colonias in these six counties are home to an estimated 369,500 residents.

According to the report, noticeable progress has been made as the state has invested tens of millions of dollars in infrastructure projects in these six counties.

“In 2006, 636 colonias were labeled green [in Chart 1] with access to drinkable water, adequate drainage, wastewater disposal, solid waste disposal, paved roads and legal plats,” the report reads. “By 2014, however, an additional 286 colonias had access to all forms of infrastructure. In 2006, 396 colonias were labeled yellow with access only to drinkable water, wastewater disposal and legal plats; however, by 2014, 555 colonias were classified as yellow. There were 442 colonias having no infrastructure (labeled red) in 2006, but by 2014 this number had dropped to 337. These changes represent appreciable overall progress.”

Despite the progress in infrastructure development, the quality of housing widely varies in colonias. The report claims that just because a colonia is classified as “green” in the chart above does not mean that the houses in the colonia are in good condition. Recent improvements on infrastructure have led to higher land costs in many of the colonias. When residents spend more on land, they have less money to afford safe, good quality housing. Providing affordable housing to colonia residents will only become more and more of a challenge as land prices rise.

Although this report was not able to find the rate of homeownership in the colonias, a study by the University of Texas at Austin commissioned by the Texas Department of Housing and Community Affairs in 2012 found the homeownership rate in colonias and similar living situations was around 77 percent. This percentage is higher than the overall percentage of homeownership in Texas, which is 63 percent according to the most recent Census data. While this high rate appears promising for helping residents escape poverty, systemic problems in purchasing property have prevented homeownership from being a way of building wealth.

Homeownership in colonias does not act as the asset building mechanism that traditional homeownership does because originally, many of the homes were financed through “contract-for-deeds” (CFDs). According to the UT report, with a CFD the buyer only receives the deed to the land when the entire agreed purchase price is paid. CFDs can be used to take advantage of colonia residents with higher financing rates than conventional mortgages, informal documentation, and stringent default rules. CFDs have been used for many decades with the first formal count taking place in 1989. Although the government has been working to create stricter laws for CFDs and the practice peaked from 2000 to 2001, the use of CFDs has been and will continue to be an impediment to gaining wealth.

The Federal Reserve report offers much to be hopeful about, but with new and old challenges ahead, communities will need more innovative solutions to the problems of infrastructure and housing. Many solutions are being developed through partnerships between colonia residents, nonprofits, governments and private institutions, and more are coming. While poverty remains far too widespread, there are encouraging signs that investment in infrastructure is changing the lives of many colonia residents for the better.