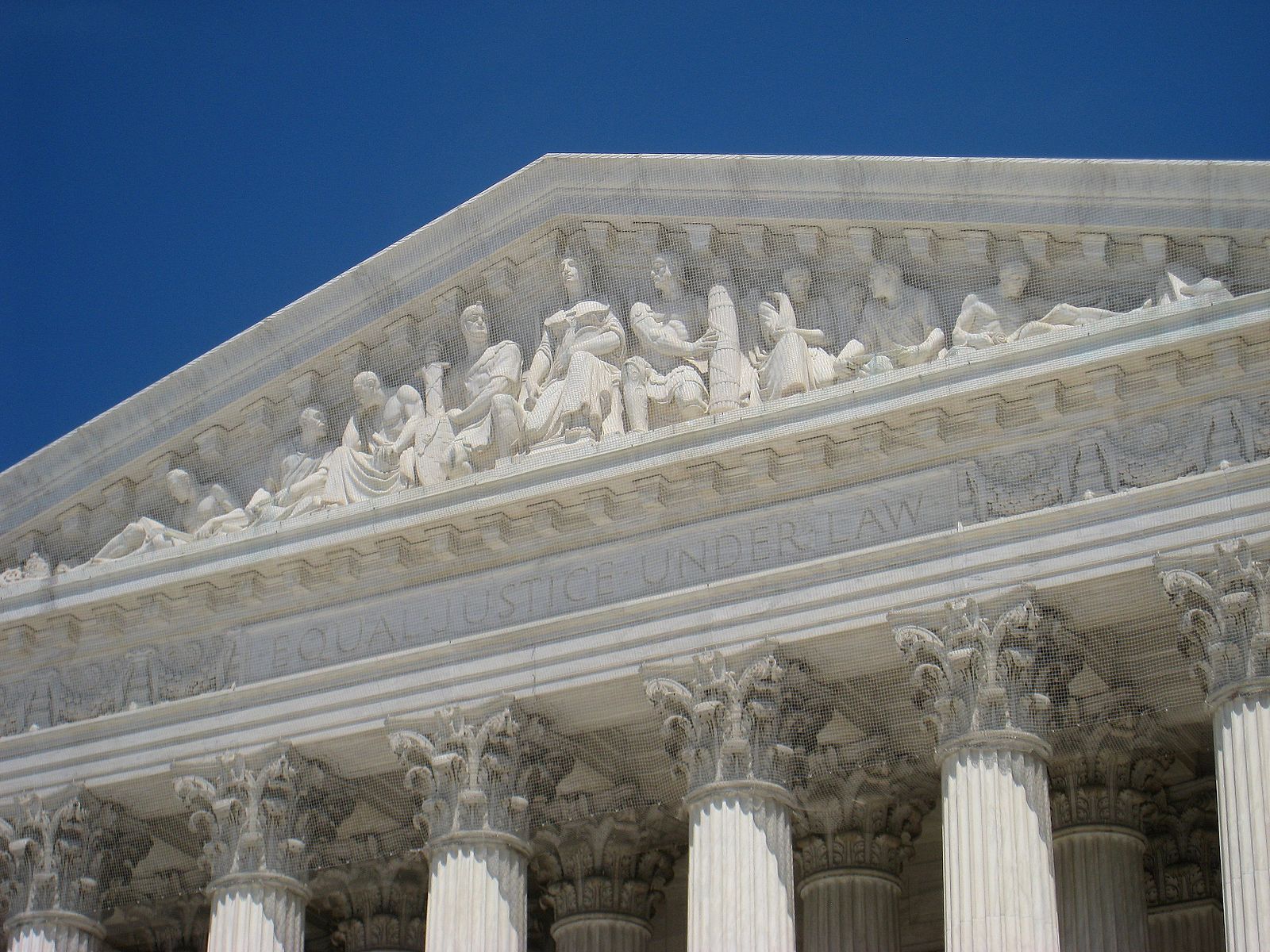 Here’s our organization’s official statement on the Supreme Court’s decision:

The U.S. Supreme Court issued a ruling today in Texas Department of Housing and Community Affairs v. The Inclusive Communities Project, an appeal of a decision by the Fifth Circuit Court of Appeals.

While it will take some time to analyze the Court’s 75-page opinion, the decision to uphold the use of “disparate impact claims” under the Fair Housing Act is a victory for equal opportunity in America. In a 5-4 ruling, the majority of justices affirmed that the country needs the power of the Fair Housing Act to overcome racial segregation and discrimination, and that policies that isolate low income people of color, like what happened in Dallas, are unacceptable.

The original ruling by the District Court in the Texas case provided low income families of color with more choice in housing by requiring a change in the state’s Low Income Housing Tax Credit scoring system, giving more points to projects built outside high poverty areas in order to open up affordable housing options in higher opportunity, racially integrated neighborhoods. With this positive Court ruling, the same disparate impact principles should be applied to housing policies nationwide And it’s important to note that beyond disparate impact, the full Fair Housing Act and other federal mandates, such as President Clinton’s 1994 executive order to affirmatively further fair housing, require racial desegregation and equal opportunity in publicly-funded housing. We must use all fair housing tools to improve housing options for low income families of color.

The legal obligation to affirmatively further fair housing was upheld by today’s decision. But recent research underscores our society’s moral obligation to increase housing opportunity. A landmark new study by The Equality of Opportunity Project shows how being born in certain parts of the country affects low income children for life, greatly diminishing their future potential income – unless those children have the chance to move to a higher opportunity area. The areas around Austin, San Antonio, Dallas and other parts of Texas rank among the worst places in the country for a low income child to grow up. Meanwhile, children raised in high opportunity areas nearby go on to earn a much better living. We must remedy this inequity with every tool at our disposal, including disparate impact actions, housing vouchers and protections allowing voucher families to choose where they want to live, diversity and desegregation in public housing stock and more. Through the aggressive promotion of fair housing, we can help low income families give their children hope for a brighter future.

While our organization is not a party to the lawsuit, as advocates for integration and an end to housing discrimination we are interested in both the outcome the Supreme Court’s decision and what this case says about the our country’s commitment to equal opportunity, civil rights and fair housing. Many households with lower incomes depend on the affordable apartments created under the Low Income Housing Tax Credit program to find a decent place to live. This is especially the case for families using Housing Choice Vouchers, who are hyper-segregated into high poverty, racially segregated neighborhoods because of a lack of apartments available to voucher holders. A large share of these households with lower incomes and with housing vouchers are African-American.

In today’s case, the facts were not in dispute. In the Dallas metro area, the Texas Department of Housing and Community Affairs (TDHCA) for decades awarded many millions of dollars in federal tax credits through the Low Income Housing Tax Credit program to private developers to build affordable apartments that are available to voucher holders. When TDHCA awarded the credits the state had many more applications to build apartments than it had federal tax credits to award. So, TDHCA was faced with a choice of which developments in which parts of town would get funded.

These choices were partly driven by board discretion and partly driven by an application scoring system adopted by TDHCA that weighs a number of factors. The result was that year after year, TDHCA awarded tax credits largely to developers building government subsidized apartments in low income, African-American neighborhoods in South Dallas instead of applications to build in neighborhoods that were lower poverty and where African-American households are less concentrated.

Federal District Judge Sidney A. Fitzwater, who was appointed to the bench by President Reagan, ruled in the original Inclusive Communities Project (ICP) v. Texas Department of Housing and Community Affairs lawsuit that the way the state housing agency awarded the federal housing tax credits in the Dallas area had a disparate racial impact, violating §3604(a) and 3605(a) of the Fair Housing Act (Civil Rights Act of 1968).

Judge Fitzwater found that the State of Texas must take corrective action to remedy this disparate impact. He noted in his opinion, “Nor is there a basis for finding that TDHCA cannot allocate LIHTC in a manner that is objective, predictable, and transparent, follows federal and state law, and furthers the public interest, without disproportionately approving LIHTC in predominantly minority neighborhoods and disproportionately denying LIHTC in predominantly Caucasian neighborhoods.”

The housing agency did what the judge directed, the judge approved the State’s remedial plan, the housing agency implemented it, and, lo and behold, it worked pretty well. TDHCA has been awarding funds to developers to build apartments all across the metro area, including places where there is no affordable housing, in neighborhoods with good schools, lower crime, access to jobs — that is, places where families want to and need to live. TDHCA’s actions offered families who need an affordable apartment, for the first time, housing choices beyond the most distressed neighborhoods in Dallas.

As a whole, Texas has made some real progress toward equal opportunity and fair housing in the forty-six years since the Fair Housing Act was passed. But for lower income households of color, progress has lagged. One big problem is the lack of affordable housing opportunities outside traditional high poverty, racially segregated neighborhoods. Government agencies have a signifiant opportunity and a legal obligation to address persistent housing segregation when government provides public funds to developers to build affordable housing. There simply is no excuse to continue to restrict citizens housing choices to segregated, distressed neighborhoods when public resources are available to offer people a choice of a better place to live.

To give families a choice to move to a better place to live, when our government chooses where to fund affordable housing, is the right thing to do. This is what the Fair Housing Act requires — equal opportunity and fair housing for everyone.

The state housing agency took an important step toward solving this problem. The agency did so by acting in response to Judge Fitzwater’s direction to end the exclusive construction of apartments in African-American neighborhoods and end the denial of applications to build apartments in other, less poor and neighborhoods with more opportunity.

This should have been the happy ending of this story. But it was not. The governor and the attorney general decided to appeal Judge Fitzwater’s decision in a radical effort to have the Supreme Court remove their responsibility to further fair housing.

Texas Attorney General Greg Abbott’s legal argument was that “the widespread application of disparate-impact liability creates incentives for landlords, property owners, and government entities to resort to illegal race-conscious decision making as a way to stave off potential disparate-impact lawsuits. See Ricci v. DeStefano, 557 U.S. 557, 580–84 (2009); id. at 594 (Scalia, J. concurring). Nowhere are these incentives more pronounced than in the housing context, where racial quotas and set-asides may be the only way for a potential defendant to prevent litigants from establishing a ‘prima facie case’ against him.”

The Texas Attorney General’s appeal ignores the decades of actions by the State of Texas that produced all-Black apartment projects in high poverty neighborhoods with failing schools. The appeal ignores the state action that has trapped multiple generations of African-American Texans, past and future, in segregated neighborhoods with poor public services and denied families an essential tool for improving their fortunes, the option to choose what community in which to live. The appeal seeks to protect government entities from “resort to illegal race-conscious decision making” yet it fails to acknowledge the undisputed fact that the State itself has largely contributed to the creation and preservation of racial segregation. We wish that Governor Abbott had tempered his zeal to protect government entities from an imagined harm with the need to protect the interests of citizens, tenants and neighborhoods from the real harm of not having a choice of where to live.

This is not a small matter. The State of Texas’ view of civil rights would permit the state government to allocate federal funds for housing where ever it chooses, regardless of the impact on the fair housing rights of citizens and neighborhoods. The effect of what government does to people, he argues, is not important. The only governmental action the attorney general would consider illegal would be one accompanied by an official resolution that states, “the State of Texas resolves to take the following action to unlawfully discriminate against African-Americans because of their race.” Following this argument, the State could legally concentrate every low income, government subsidized housing development in one county, so long as it did not formally acknowledge it was doing so to unlawfully discriminate.

The Fair Housing Act prohibits discrimination in practice, as well as discrimination by design. Disparate impact has been the law of the land for almost fifty years. In this case it worked to help right a wrong to the African-American citizens of Dallas. TDHCA faced up to and solved the problem. Yet the State mounted a misguided appeal to undo a half century of civil rights progress in fair housing.

Today the Supreme Court rejected the State of Texas appeal and affirmed the Fair Housing Act and our nation’s goal of building a just and an integrated society.