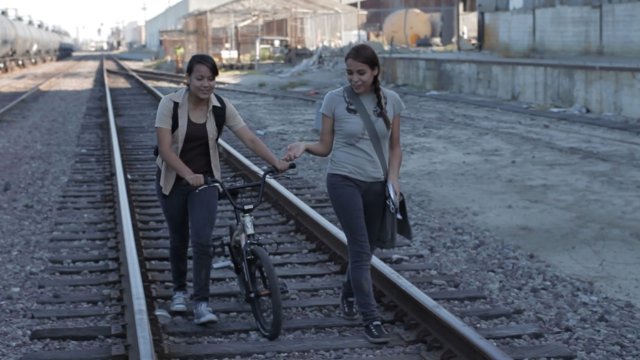 As part of Pride week in the Rio Grande Valley, Aqui Estamos, a fantastic new group focused on LGBTQ issues in South Texas, hosted a screening of the award-winning movie Mosquita y Mari at the historic Cine El Rey in McAllen. The film is “a coming of age story that focuses on a tender friendship between two young Chicanas.” It is without a doubt a must-see.

As the story unfolded, I was moved and taken aback by some of the difficult situations the characters found themselves in and navigated through. Mari and her family are in an unstable housing cycle, starting the film by moving in to a new neighborhood and a new school. As the story progresses, the family’s inability to afford their rent becomes clear and displacement and the risk of homelessness become one of the main plot points for Mari’s character. In addition to being a teenage queer Latina, this protagonist is dealing with a deficient educational experience and various other socioeconomic factors like belonging to an immigrant family in a single-parent household. The story is heart-wrenching, deeply connecting and a pleasure to watch, so I will not rob you of the experience to see it and actually urge you to do so. It’s on Netflix.

The film was especially meaningful to me, as a houser and a member of the queer community. This is a key time in our nation’s history for both of these groups.

In the context of recent landmark Supreme Court decisions, on marriage equality and fair housing, the film hit a soft spot for me while highlighting the intersectionalities of which we’re a part and the unique experiences to which they might lead.

Being a person of color is difficult, identifying as LGBTQ can be an everyday struggle, being homeless brings immeasurable hardships and even just living life as a teenager can be a daunting task. But what is the experience like when all these struggles are faced simultaneously? This film reiterates the notion that individuals don’t have the privilege of siloing off their problems. It reminds me that while the struggles may differ in urgency, we must face inequity in all its aspects, because each is just as important in addressing the root of inequality. Disenfranchisement does not adhere to social boundaries.

When addressing an intersecting issue like LGBTQ youth homelessness, for example, a multifaceted approach is necessary to be impactful and successfully reach the target population. As the United States Interagency Council on Homelessness explains, “Youth homelessness is a problem that doesn’t fit neatly into a box.” The problem is substantial when considering that “twenty to forty percent of youth experiencing homelessness self-identify as Lesbian, Gay, Bisexual, Transgender, or Queer/Questioning (LGBTQ), which is disproportionate to the percentage of LGBTQ youth in the general youth population.”

Several organizations and national coalitions are currently making great strides in tackling the problem, including the National Alliance to End Homelessness, the National Coalition for the Homeless and the National LGBTQ Taskforce, to name just a few. Advocates agree that one of the major actions necessary to address the issue is to recognize LGBTQ youth challenges, which Mosquita y Mari definitely accomplished for me.

While I am familiar with housing and LGBTQ issues individually, the reiteration of their intersectionality through a very moving and relatable example motivated me to act and commit myself to explore the topic and share my thoughts here on our blog. In the next few months we will learn about the unique problems the LGBTQ homeless youth population faces, as well as highlighting examples of best practices and good available resources. In reflecting on the film and pondering my personal revelation, I feel certain that it could not have come at a better time, with the issues of fair housing and LGBTQ rights at the forefront of the national agenda.

The Supreme Court has provided housers and LGBTQ allies with valuable tools to fight inequality in the search for justice. The marriage ruling, for example, makes it possible for legally married gay couples to apply for housing assistance if in a low income household. That is a win that both housers and the queer community can celebrate together. It’s time for us to think about how to utilize these new tools to create more of these communal victories. This is especially true with populations that personify intersections of many issues, such as the homeless LGBTQ youth community.

I’d like to thank AquiRGV for hosting the film screening and for kindling a sense of urgency in me. I invite you to learn with me, to be a part of the discussion and bring your opinions and thoughts to this interactive table. Again, if you can, please watch Mosquita y Mari. You will not be disappointed.