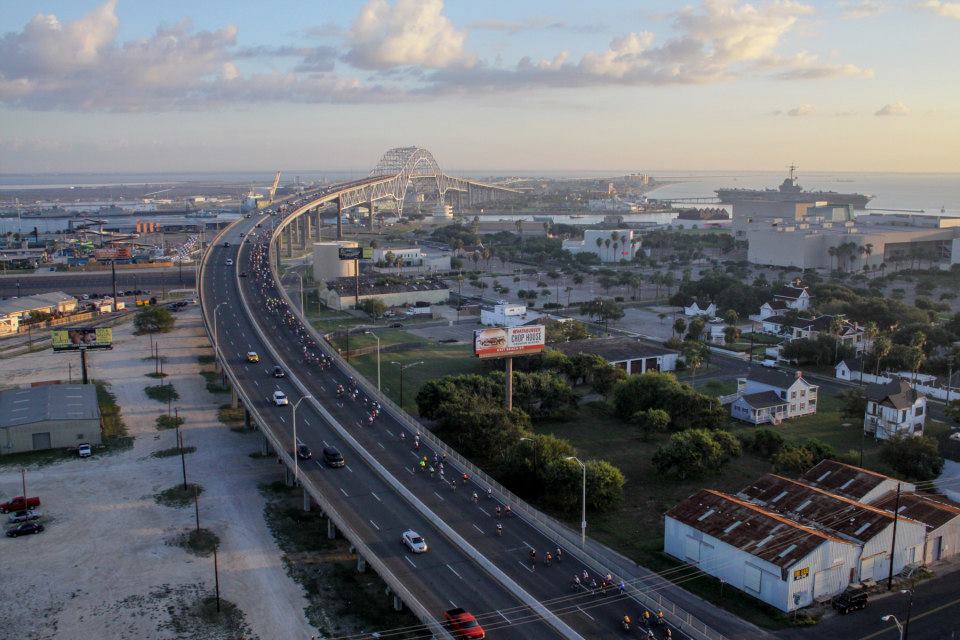 This report was written in collaboration with Colin Cox and Thomas Dannehy, interns with Texas RioGrande Legal Aid. Cox and Dannehy also contributed to our short documentary on housing and environmental injustice in Corpus Christi.

The Texas Department of Transportation (TxDOT) and the Federal Highway Administration (FHWA) plan to relocate and rebuild the Harbor Bridge in Corpus Christi to address safety and maintenance concerns. The preferred route from the environmental review process — known as the Red Alternative — cuts through the historic African-American neighborhoods of Washington-Coles and Hillcrest on the city’s north side. Hillcrest and Washington-Coles, surrounded by heavy industrial sites, Interstate 37 (I-37), the Port of Corpus Christi and a wastewater treatment plant, are already disproportionately burdened by the city’s pollution, hazards and noise. The bridge will not only bring more noise and pollution to these disinvested neighborhoods, but will effectively isolate the Hillcrest neighborhood from the residential part of the city.

The plans also call for the bridge to be raised to 205 feet in order to accommodate larger ships, providing improved economic development opportunities for the Port of Corpus Christi and nearby heavy industrial facilities. But the added height is not necessary to improve the public safety of those using the bridge, and it will require more land from the community for the new right-of-way.

The City of Corpus Christi has officially endorsed the Red Alternative and is undergoing a process to create a long-range plan for the city. The current draft of the City’s “Plan CC 2035” assumes the Red Alternative will be built and slates Hillcrest as a “special transition district” that will change from residential to industrial, without a plan for how this drastic transition would occur.

As TxDOT and FHWA move forward with the new Harbor Bridge and the City moves forward with its planning efforts, residents of Hillcrest and Washington-Coles who will be adversely affected should have a chance to move, with fair compensation, or receive home and neighborhood improvements as mitigation.

Initially, Washington-Coles was the main neighborhood in the city where African Americans could rent or own property. The first black church and first public school for African Americans in the city were both established there in the late 1800s, and by the 1950s the neighborhood was home to several African-American-owned shops, restaurants and nightclubs. Hillcrest, on the western border of Washington-Coles, was platted in 1911 as an exclusive white community for the city’s country club, and segregation was maintained using racial restrictions and minimum dwelling values attached to deeds. However, as African-American and Hispanic areas of the city became overcrowded and blighted in the 1940s, the Corpus Christi Housing Authority recommended that Hillcrest be opened to African-Americans in 1944. That same year, the minimum home value restrictions were removed from deeds in the Hillcrest subdivision, while minimum dwelling or sale values increased and racial restrictions were added in other portions of the city. Within two decades the population of Hillcrest went from predominantly white to almost entirely black.

Jim Crow era housing segregation and redlining policies largely maintained the high minority populations in Hillcrest and Washington-Coles. Since the 1940s, residents of Washington-Coles experienced high poverty, crime and disease, and many lived in dilapidated houses poorly constructed at a time when there were no construction regulations in the city. The Federal Housing Authority refused to insure mortgages due to existing blight or commercial land use, and unscrupulous real estate sellers preyed on low income African-Americans.

Since the 1930s, the Corpus Christi Housing Authority developed many low income and African-American housing projects in Washington-Coles. The agency chose to develop the D.N. Leathers public housing development in 1939 at the boundary of Hillcrest and Washington-Coles specifically for African-Americans, stating that “It is basic that Negroes, even more than other racial labor groups, be located near the source of their employment.” The warehouses at the port facility were a principal employer of African-Americans. Neighboring white property owners in Hillcrest sued to halt construction of D.N. Leathers, declaring it a nuisance. This suit prompted the Housing Authority to drop its official designation of Leathers as “the negro project.” While the adoption of race-neutral language dissolved the injunction, D.N. Leathers still was entirely occupied by African-Americans from its opening day until at least the late 1960s.

A second phase of D.N. Leathers was constructed in 1952, just north of the existing development. This expanded site was adjacent to a refining company tank farm and was in the floodplain. A 1940 Housing Authority map refers to the area that would eventually become Leathers’ Place No. 2 as “Salt Lake.” After repeated flooding, most of the dwellings were eventually demolished in 1999. Recent Housing Authority plans to build townhomes on the site came to an abrupt halt in 2008, when an environmental assessment revealed significant soil and groundwater contamination. Following Leathers, two other developments were built in Washington-Coles: Elliott Grant Homes, for the elderly and disabled, and Northside Manor.

In 1958, when TxDOT proposed construction of I-37, the City successfully petitioned for the highway to be redirected from the proposed route through the west side to a route adjacent to the Northside neighborhoods, displacing several blocks of residents and businesses. The City Council favored the route along the Northside because it would ensure the “preservation of neighborhood values…and to avoid the isolation of schools, playgrounds, churches. ” As a result of the adjusted route, the Northside neighborhoods were divided from the rest of the city, isolated into the industrial and port area and went into decline as industrial uses aggressively expanded through the 1960s.

Many Northside homeowners who were able to move away from the industrial area did so, reducing the population of owner-occupied households. The number of vacancies increased, attracting drug traffic and other criminal activity.

Current and former residents have attempted to preserve and revitalize the neighborhoods, urging the City to support physical and economic revitalization and address major issues such as crime and drug trafficking. Residents have also repeatedly expressed concerns about the lack of maintenance of neighborhood roads, parks and the cemetery. City officials have made multiple half-hearted attempts at revitalizing the Northside over the years, including programs in the 1980s that replaced missing street signs and funded grants for house-painting. But unfortunately, these efforts have done little to address the Northside’s increasing isolation.

Private industry has at times offered residential buyouts of select properties in Hillcrest and Oak Park Triangle (located west of Hillcrest and the Citgo and Flint Hills East Refineries) to create a “buffer zone” for the residential neighborhoods. Between 1980 and 2000, industry bought an estimated 750 to 1,000 homes on the northside, mostly in Oak Park. However, buyouts also created an opportunity for new industrial growth, as the City approved rezoning some of the former neighborhoods to industrial. A buyout option was provided by Flint Hills Resources in the early 2000s for the two blocks of Hillcrest closest to their refineries. While a few homeowners still live in this buffer zone, the area is now largely vacant lots and office buildings.

The new Harbor Bridge and the Plan CC 2035 represent choices about whether to complete the isolation of the Northside with another freeway and further allow these neighborhoods to bear a disproportionate share of the pollution, noise and disruption effects of the highway, or to mitigate the historic discrimination and longstanding neglect of these neighborhoods by addressing their isolation and unequal adverse impacts.

The bridge is expected to create noise impacts over 67 decibels for 533 residences, an impact that cannot be mitigated. The U.S. Department of Housing and Urban Development (HUD) has expressed concerns about these noise impacts, particularly to the HUD-assisted facilities and sensitive populations, as well as the bridge’s impacts on property values on the Northside.

The bridge will also increase toxic air emissions in Hillcrest due to traffic. However, TxDOT has refused to analyze these emissions despite the federal Environmental Protection Agency’s (EPA) requests. In particular, the EPA criticized the plan for the new bridge for “primarily analyzing air impacts at the regional level” and not giving “adequate consideration of near-road air emission impacts to minority and low-income populations in the Northside community.” For example, studies cited by the EPA showed more than four times the concentration of diesel particulate matter in the immediate Northside community when compared to Nueces County in general. Chronic exposure to high diesel particulate levels can lead to short-term and long-term impacts on lung health, and the Northside already has high rates of asthma compared with other parts of the city.

The construction of the proposed bridge will ultimately result in Hillcrest being surrounded on all sides by heavy industry and freeways. The bridge will cut through the center of Washington-Coles, with the eastern portion slated for gentrification and incorporation into the city’s entertainment district. Section 8 housing has already been moved from the eastern part of the neighborhood to the other side of I-37.

Existing conditions in Hillcrest and Washington-Coles

Along with poverty, segregation and blight, Hillcrest has property and violent crime rates more than double that of the city. Washington-Coles has nearly double the city’s violent crime, and almost triple the property crime.

Additionally, 17 of the 28 Toxic Release Inventory (TRI) sites regulated by the EPA in Corpus Christi, including the five with the biggest releases or disposal of chemicals, are located in or near Refinery Row, which borders Hillcrest. Washington-Coles is located within a half-mile of two brownfields, while Hillcrest is within a half-mile of a brownfield, a hazardous waste facility, and two of the largest emitters on EPA’s Toxic Release Inventory.

3 comments on “The story behind the Harbor Bridge: Segregation, neglect and pollution in Corpus Christi”