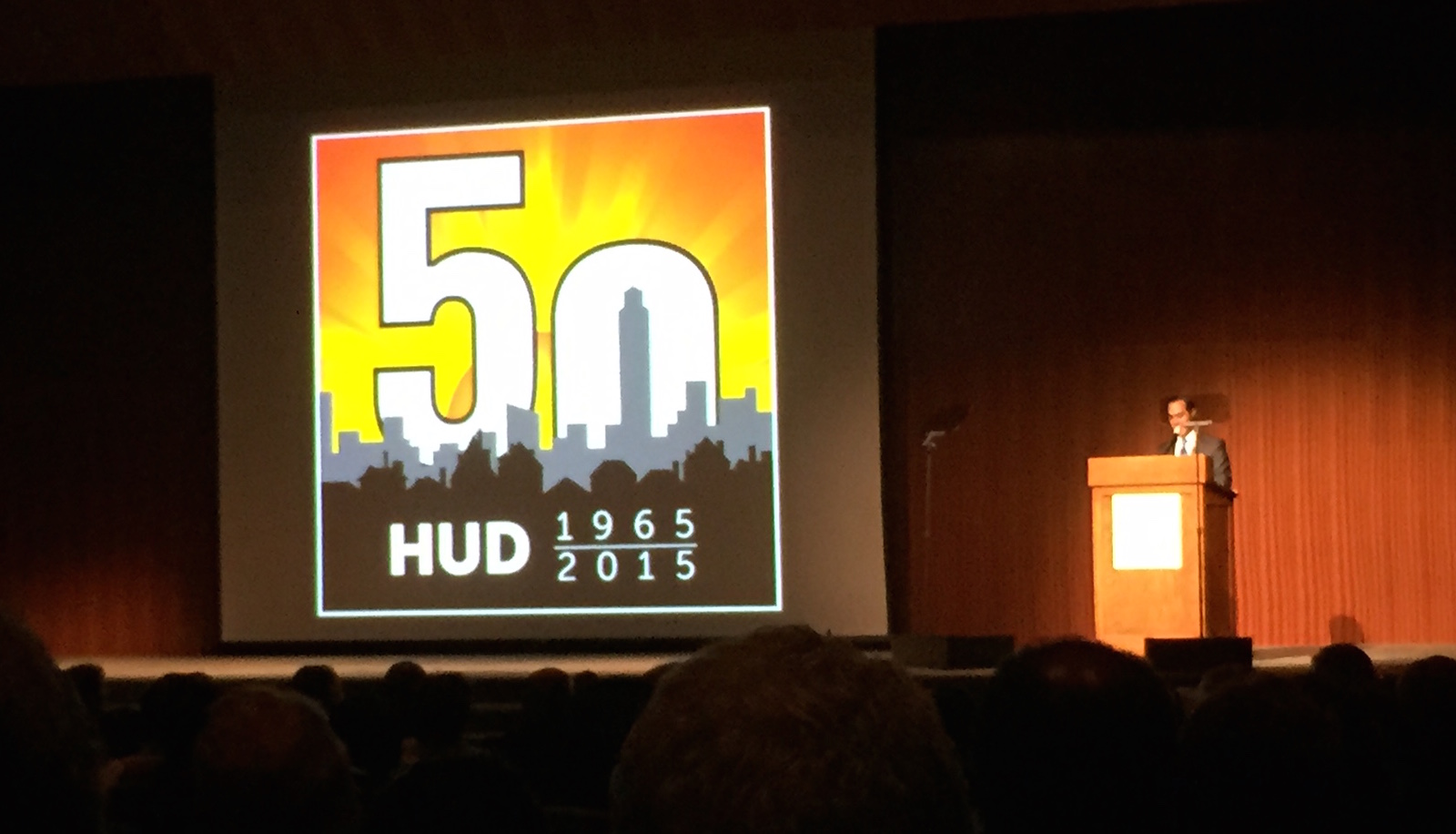 At the LBJ School of Public Affairs in Austin, 50 years to the day since President Lyndon B. Johnson established the U.S. Department of Housing and Urban Development (HUD), Texas native and current HUD Secretary Julián Castro said that he thought the school’s namesake would be proud.

“Without question, the creation of HUD deserves a place among the Great Society’s greatest accomplishments,” Castro said, referring to his fellow Texan’s wide-ranging anti-poverty and civil rights agenda. “But President Johnson would not think the work was done. He would also ask tough questions.”

Castro’s keynote address at the 2015 Reimagining Cities Conference, held Wednesday on the University of Texas campus, touched on many of the pressing fair housing questions that we deal with here at Texas Housers. In looking back at HUD’s history, and how President Johnson perceived the department as a crucial element in the fight against racial segregation and inequality, Castro outlined the work that remains to be done.

“I’m confident that this approach will be one of the hallmarks, one of the legacies, of the Obama administration,” the secretary said.

He began the address by describing the infamous Watts riots in Los Angeles in the summer of 1965, just weeks before HUD’s establishment. Castro clearly meant to connect that time, and what it said about the need for fair housing and neighborhood equality, to contemporary racial strife in Ferguson, Missouri and elsewhere. One of the messages around the new AFFH rule is that zip code matters – growing up in a poor area makes it much more likely that a person will stay poor the rest of their life. Castro said that he had visited Ferguson and was struck that there was an average 18-year difference in life expectancy for residents of two of the area’s zip codes just 10 miles apart.

“Too often, a child’s zip code determines their future,” he said, later citing a recent landmark study on the effects of place on low income children. The study found that the Austin area is one of the worst places in America for a child to grow up in a low income area, as Travis County ranked in just the 13th percentile nationwide.

Castro said that HUD’s new rule was the beginning of a three-pronged effort to address neighborhood inequalities. He said that the department wanted to “do its part to level the playing field” between zip codes through:
1. A holistic approach to anti-poverty efforts, including infrastructure investment, transportation and more; 2. Better measurement of result, an important feature of the new rule that includes expanded analysis of how housing investment leads to better employment opportunities, higher graduation rates and much more, and;
3. A balance between revitalizing distressed neighborhoods and encouraging mobility for families to move into higher opportunity areas.

The fine line between revitalization and mobility is a hot topic in fair housing circles, and one that is particularly felt in East Austin, which Castro noted. “Every time we raise the issue of mobility, a question rises from the back of the room: What about those families who don’t want to leave the neighborhood?” he said. He emphasized the importance of housing vouchers as a way to move low income families into higher income areas (though he did not mention Austin’s source of income protection ordinance, nor its voiding by the Texas Legislature, as he did in an interview in August). And he said that HUD remained committed to renovating old housing and investing in existing low income neighborhoods.

As for East Austin, Castro said that LBJ would see both good and bad: Startling economic growth mixed with rising rents and the displacement of longtime residents. In describing one of the country’s most gentrifying areas, Castro drew his biggest applause line of the day.

“For East Austin and places like it, we have to improve and invest for East Austinites who have long called that neighborhood home,” Castro said to cheers. He added, “We can do that in East Austin and we can make it inviting for newcomers as well.”