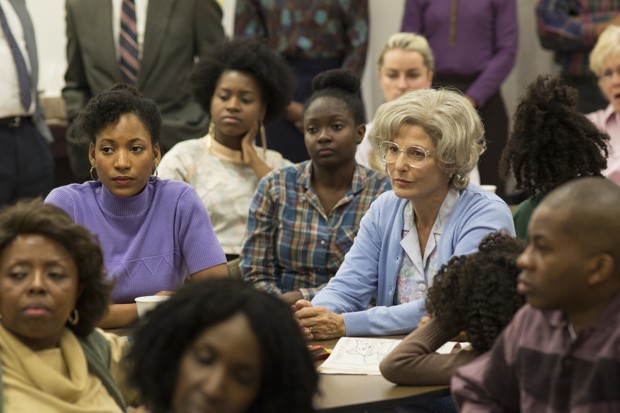 The HBO miniseries Show Me a Hero is over. The show concluded last week, wrapping up its immersive, deeply felt retelling of an infamous fair housing struggle nearly 30 years ago.

But of course in real life, in the present and especially here in Texas, the fight for fair housing is far from finished. Show Me a Hero’s co-producer David Simon, the TV maven best known for creating The Wire, noted as much on Twitter last week:

Present-day "Show Me A Hero" dynamic in which the Obama administration has not fought the good fight: Dallas, Texas. http://t.co/eDNB5bDMaE

Simon said the same on an episode of Democracy Now! last month, referring to a fair housing investigation in Dallas by the U.S. Department of Housing and Urban Affairs (HUD). His show is set in the late 1980s and early 1990s, when a fair housing lawsuit resulted in a federal desegregation order for public housing in Yonkers, New York. A years-long political battle commenced over the mandate to build low income units – for the predominantly African-American and Hispanic residents of public housing – in traditionally white neighborhoods.

In the 2010s, a years-long HUD investigation found that the City of Dallas was not using federal desegregation funds appropriately, and was instead working to stop the construction of affordable housing downtown. Jim Schutze in the Dallas Observer called the HUD ruling “the same kind of gun Yonkers faced 30 years ago”: A federal mandate to desegregate or face consequences.

Except, in the current case, the mandate has been removed. HUD changed course, backing away from the investigation’s findings and staying out of the ongoing litigation. In Show Me a Hero, public housing is desegregated in Yonkers only through the persistence of a federal judge, the threat of bankrupting fines (and even jail time) if the City Council does not approve a housing plan and the efforts of the series’ nominal main character, Mayor Nick Wasicsko, which come at great political and personal cost.

And even under all of this pressure, the 200 units of scattered site public housing weren’t built on Yonkers’ white side of town for years after the federal government required it, as obstinate politicians and angry locals stonewalled the process at every turn. Several scenes in Show Me a Hero depict mob-like crowds at City Council meetings, irate that their local government would consider obeying federal law and allowing low income tenants to move into their neighborhoods. Anti-housing protesters smash the windshield of Mayor Wasicsko’s car; someone paints a racial slur on the side of a scattered site house under construction.

Today in Texas, some low income housing developments are met with vitriolic opposition. And while it does not approach the level of violence seen in Yonkers then, it sends a clear message both to politicians and to low income families of color. Large crowds have recently gathered at public meetings to vocally denounce proposed tax credit developments. Online, petitions from neighborhood groups against affordable housing are full of statements about “low income riff raff,” “thugs, drugs and crime,” “fear for the safety of my family.”

This is prejudice, plain and simple, against low income tenants – who, not coincidentally, are overwhelmingly non-white. And it has a real, negative effect on where low income families can live. The City of Beaumont, under public pressure, recently chose to reject millions in federal funding rather than build a public housing complex in an integrated neighborhood. Our recent analysis of this year’s state housing tax credit process found that influence of state representatives, who are themselves influenced by the loudest voices in their districts, often blocks low income housing from being built in low poverty, high opportunity neighborhoods.

The same is often true for people with housing vouchers, who find themselves discriminated against by landlords who buy into negative stereotypes about voucher holders. Consequently, families with vouchers in Texas are mostly limited to living in high poverty, predominantly minority neighborhoods. Before HUD walked back its investigation in Dallas, one of the department’s requirements of the city was a source of income protection ordinance similar to the one passed in Austin in 2014, which prohibits landlords from refusing to rent to voucher holders. But earlier this year the Texas Legislature voided Austin’s ordinance and banned source of income protection laws statewide.

In modern-day Texas, prejudice and discrimination against low income residents still causes great harm to the mostly non-white tenants of affordable, subsidized and public housing, as well as many families with housing vouchers. Show Me a Hero is a visceral look at the manifestations of that prejudice, but it also demonstrates why fair housing is worth fighting for.

Alongside the political machinations and angry crowds, the show also tracks the lives of several public housing residents, low income folks (mostly single mothers) whose lives would be measurably improved if they were allowed to move into a quality neighborhood. They want simply what is most essential to any American life: A safe place to live and raise a family, a bed where their child can sleep and a yard where they can play.

Not to spoil the ending of the series, but it works. Two hundred black and brown families move into townhouses on the white side of town. Crime doesn’t go up, property values don’t go down. They become neighbors.