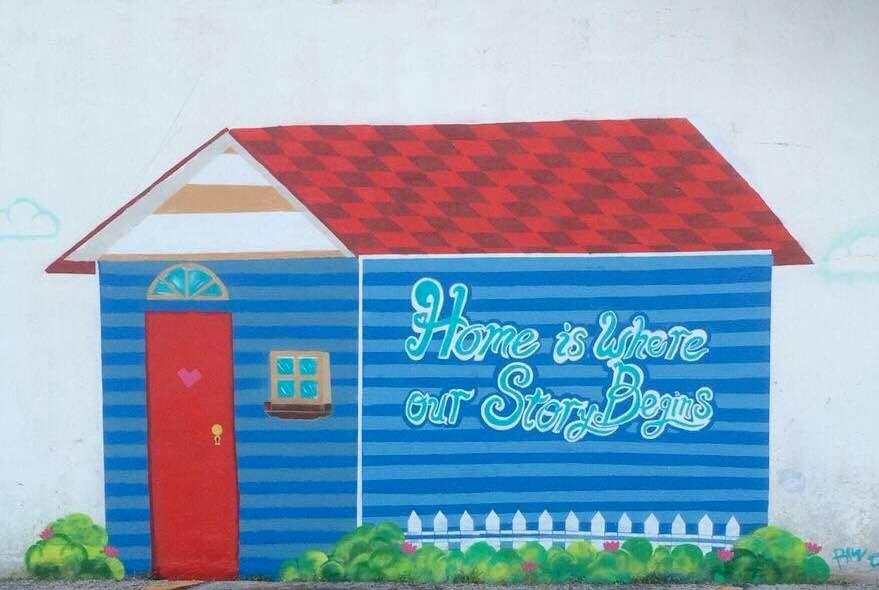 The weatherman predicted a 90 percent chance of heavy rain, but there was not a drop in sight. The sun was shining bright on downtown Brownsville, in the tip of the South Texas border. The oil marks left by old transmissions on the HEB parking lot bubbled in the heat while we stood amid a sea of roasting vehicles, brushes in hand, facing a huge wall.

The goal was to paint an image of a house, a message of community and family. “Paint something related to housing,” I was told by the staff at the Community Development Corporation of Brownsville (CDCB), whose wall I had been given the privilege to adorn.

I was approached earlier in the month with the idea of helping CDCB out with a mural for their 40th anniversary celebration on September 12, and I could not turn down the opportunity. CDCB has been a key part of my professional development as a houser, and a game changer when it comes to affordable housing and inclusive community development practices. In my work, I have been lucky enough to collaborate closely with CDCB, learn about their organizational values and interact with their dedicated staff and leadership. I asked for some vacation time and was anxious to begin.

As we started measuring and sketching under the sun, my collaborator, a good friend and local artist Esteban Valdez and I talked about how great it was to have support from such an awesome organization. I told him that’s what CDCB does – support their community and reach out to everyone, even the most underrepresented and overlooked.

“That’s cool, I’ve never been recognized like that,” Steve responded.

Those words stuck with me as we proceeded to roll the first layer of primer on the wall. As I painted, I thought about the story of CDCB, and its humble origins. Father Armand Mathew, a priest newly settled in Brownsville, wanted to know the needs of the people of his parish. According to Nick Mitchell-Bennett, CDCB’s executive director (and 2015 Texas Houser Award winner), Father Mathew saw the need to address housing.

With the need of his congregation in mind, Father Mathew founded CDCB in 1974. Since then, the organization has been steadily and consistently meeting the affordable housing needs of the residents of Cameron County. It has become the largest non-profit producer of single family housing in Texas. CDCB offers accessible housing for homeownership to families as well as setting outstanding affordability standards for serving low income residents of the area.

Underneath it all, CDCB understands the value of housing. The development corporation is keen in identifying the obstacles that Rio Grande Valley families face, not only in housing but also in terms of building community. The organizational partnership with local and state organizations such as A Resource in Serving Equality (ARISE), buildingcommunityWORKSHOP (bc), La Unión del Pueblo Entero (LUPE) and us at Texas Housers are a tribute to their commitment to work hand in hand with low income residents and community advocates for inclusive solutions.

An example of an effort that highlights the importance of building community between CDCB and low income residents is the collaborative leadership development program Land Use Colonia Housing Action (LUCHA). LUCHA seeks to inform, train and professionally develop colonia residents, to build understanding and knowledge in the topic areas of land use, housing, infrastructure and public service so they can better advocate for their community priorities. The enhancement of the potential of colonia leaders, and the support for community movement building, has proven effective and has progressed at the local, state and federal levels. Thanks to the collaboration between local advocates and CDCB, low income colonia residents have made a space for themselves at the decision-making table for many of the issues that affect them directly, such as public lighting, drainage improvements, disaster recovery planning and other housing assistance programs.

CDCB’s commitment not only to affordable housing in the Rio Grande Valley but to the prosperous and inclusive development of low income communities is firm, and has received praise and attention from many great supporters including the Ford Foundation, the Rockefeller Foundation, the Annie E. Casey Foundation and NeighborWorks America to name a few.

As I stepped back to review the image that was starting to take shape, I thought about CDCB and our design. It was pretty simple and honest. I decided to paint a quaint home that resembled one of the smart home designs that CDCB builds. Within the house the quote “Home is where our story begins” was stenciled out and then spray painted. It’s a saying that perfectly sums up the endless possibilities created through CDCB.

The mural took two days to finish. “It went up faster than a RAPIDO house,” one of CDCB’s board members commented, comparing the image to one of the rapid rehousing projects for which CDCB has gained national recognition.

My collaborator and I chuckled as we wiped sweat away and put the finishing touches while we waited for the mural’s official unveiling at the 40th anniversary celebration. In the afternoon, CDCB packed the house. They provided a great family atmosphere and had special guests addressing the crowd including City of Brownsville Commissioners, CDCB home recipients and clients, past CDCB executive directors and Congressman Filemon Vela. The celebration was a culmination of the community CDCB has created. I am honored to have been a part of it.

Thank you, CDCB, for the tremendous work and for partnering with us at R(t)GV, the budding street artist collaborative seeking to redefine how street and graffiti art is perceived in the Lower Rio Grande Valley. Special thanks to Luciana Mendoza, Cynthia Rocha, Esteban Valdez, Nick Mitchell-Bennett and Leo Barrerra for this opportunity and for a few days of fun. Here’s to many more years of work.