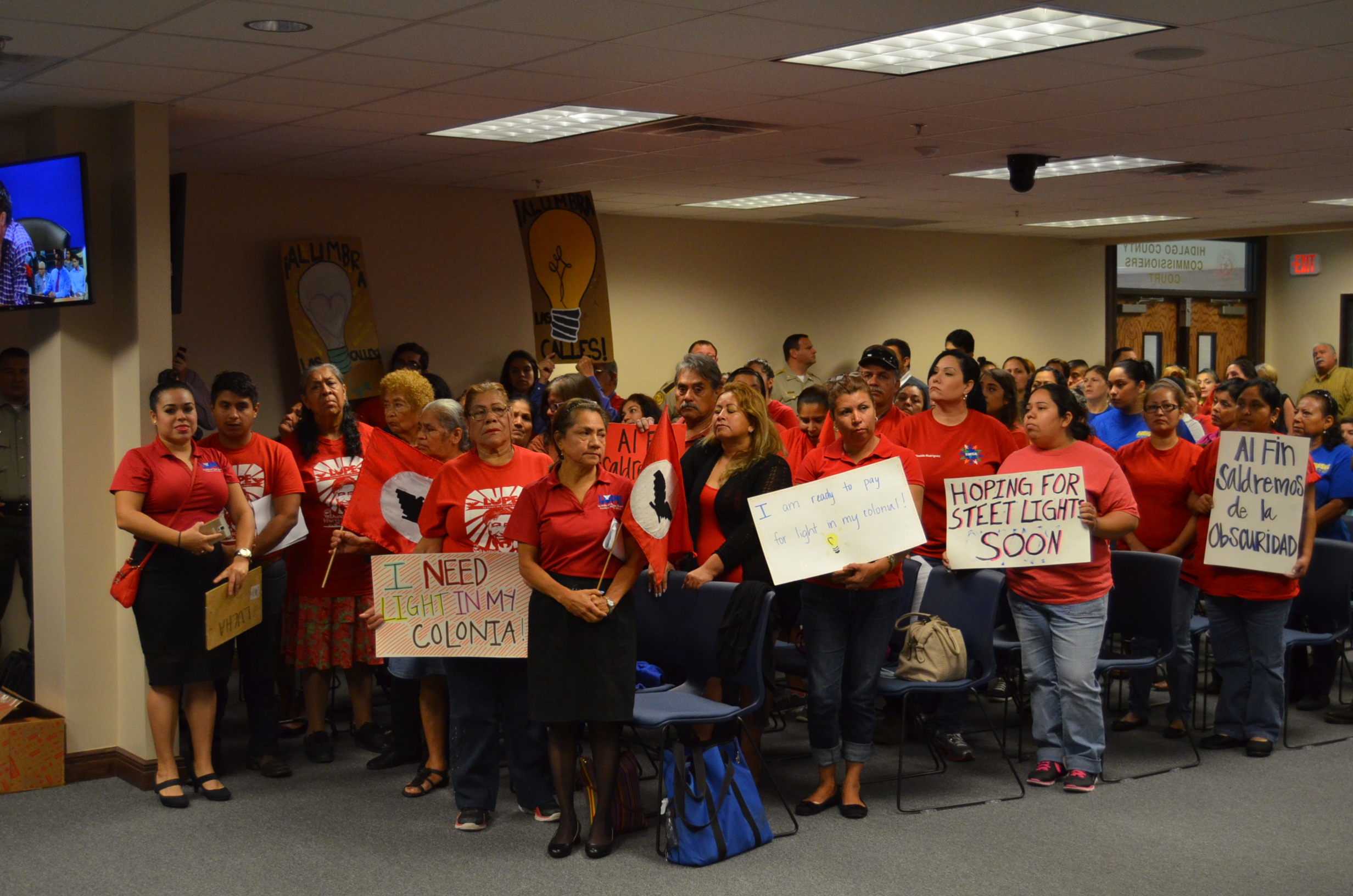 Our partners at La Unión del Pueblo Entero (LUPE) and A Resource In Serving Equality (ARISE) were instrumental in securing this victory for colonia residents, which will result in a pilot program to add street lighting to 10 colonias in the county, covering about 960 homes. According to LUPE, around 80 percent of the more than 1,000 colonias in Hidalgo County are without any street lights. The darkness contributes to crime, creates dangerous street and traffic conditions and makes residents feel unsafe.

Organizers from LUPE and ARISE packed the Commissioners Court for the final vote (pictured above; photo by Hidalgo County Public Affairs), as they have for many meetings at the local and state level over the past decade. Their fight to bring light to the colonias has been long, and is far from over – the pilot program’s street lights are set to be installed by January, but the residents of hundreds of other colonias will have longer to wait.

A victory earlier this year at the Texas Legislature laid some groundwork for the commissioners’ final decision. With LUPE and ARISE’s backing, House Bill 3002 by Rep. Armando Martinez of Weslaco created a process for collecting fees from colonia residents to pay for street lighting. While counties in the Rio Grande Valley already had the authority to install street lights thanks to legislation passed with LUPE’s help in 2005 and 2007, this year’s bill formalized the funding source and reinforced Hidalgo County’s earlier commitment to create a pilot program. Residents who testified at the Legislature said that they were happy to contribute to the cost of lighting if the county would back the program.

Now, residents of the 10 participating colonias will pay about $30 per household each year in electricity bills, while the county will foot the cost of installation. The Hidalgo County Commissioners will decide whether or not to fund an expansion of the program in the future based on the results of the pilot program. The committed organizers of LUPE and ARISE will continue to advocate to make sure that expansion happens and that more of the colonias are illuminated.

We’re proud to stand with these extraordinary community groups as they improve the lives of colonia residents. To learn more about LUPE and ARISE, check out our series of brief video interviews with the three women behind much of their success.