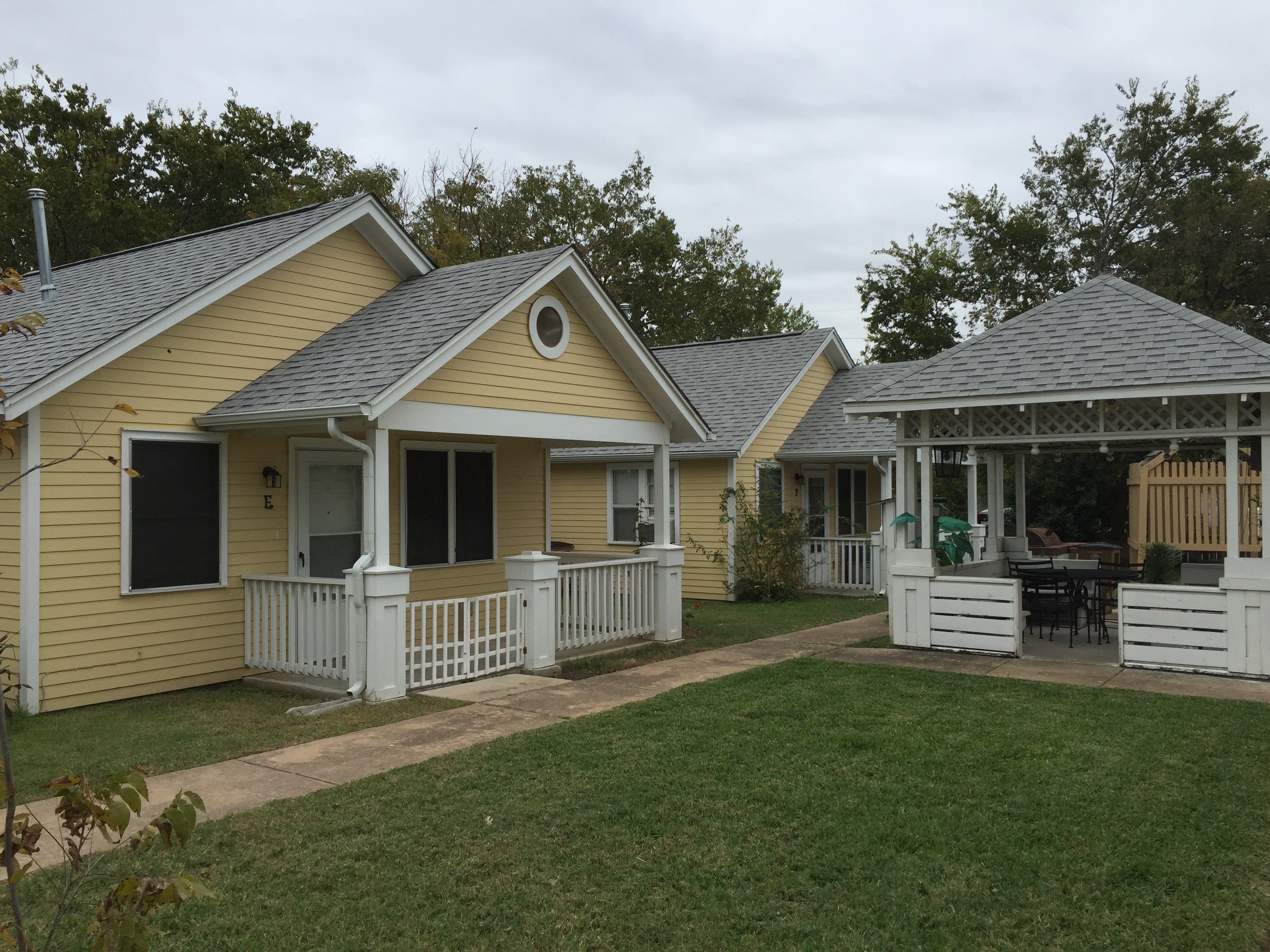 Community development corporations (CDCs) are the lifeblood of the low income housing movement, building quality affordable homes and preserving diversity and community in traditionally marginalized areas. In Texas we are fortunate to have several outstanding CDCs working tirelessly on behalf of low income residents. This series of CDC Spotlights will take a closer look at what that work entails, the challenges CDCs currently face, how CDCs are evolving and more. Today’s first installment spotlights Blackland CDC in East Austin.

Residents of Austin’s Blackland neighborhood are accustomed to encroachment. A city segregation plan in 1928 forced African-Americans to resettle on the east side of town, turning Blackland (so named for the color of its rich, cotton-land soil) from a Swedish neighborhood into a predominantly black one. The construction of Interstate 35 in the 1950s cut Blackland off from the west side of Austin. The same 1928 plan called for the University of Texas to expand eastward into the black neighborhoods, and in the ‘70s and ‘80s, UT started to grow east of the highway, building a baseball field and maintenance facilities – and almost much more, if not for the organizing efforts of residents. Now, as Austin’s rapid gentrification transforms the eastern neighborhoods, new construction threatens Blackland’s diversity and affordability, displacing some longtime residents and driving up the cost of living for those who remain.

That’s why Bo McCarver, the board president of Blackland Community Development Corporation (BCDC), talks about “eternal vigilance.” Without the presence of longtime residents committed to affordable housing and racial and ethnic diversity, McCarver says, Blackland would look very different today.

“It doesn’t just happen,” he says of the continued presence of low income, minority residents in an area beset by gentrification. “You have to have the hearts and minds of the neighborhood.”

Since its incorporation in 1983, BCDC has cultivated that mindset. They provide affordable housing – 48 homes, mostly though not entirely stand-alone single family structures that serve low income families, seniors, people transitioning out of homelessness and people with disabilities – but that is not the extent of their mission. Rather, McCarver sees the CDC as the way in which low income residents make their voices heard.

That commitment to community provides lessons for CDCs in other gentrifying areas. TxLIHIS is proud to have been involved with BCDC since the beginning, helping Blackland residents fend off encroachment from UT and building up low income housing in the area. BCDC’s decades of success demonstrate what a powerful CDC can accomplish.

McCarver grew up on a farm in Oklahoma, and takes to heart a lesson called the “poisoned watermelon policy” – that a sign warning that one watermelon in a patch has been poisoned will deter thieves from taking any of the watermelons. To that end, BCDC places an informational kiosk or other indicator outside each of their properties, announcing the presence of low income housing.

“We stick it in their face,” McCarver says. “So when someone is going to buy a house in this neighborhood, they know that they’re going to be around low income people.” That way, potential residents uncomfortable with neighborhood diversity will choose not to live in Blackland – and those who value diversity will be more likely to move in.

By spreading affordable housing throughout the neighborhood, McCarver believes BCDC can “poison” more blocks for gentrification, particularly the development of condominiums. There are only 24 blocks in the designated Blackland neighborhood, and BCDC operates properties on 15 of them. The CDC’s strategic plan includes an ultimate goal to have at least one house on every block.

Of course, building a community that values diversity does not happen by just keeping people out. BCDC’s headquarters is the Fannie Mae Stewart Community Conservatory, a gathering space and community center that hosts neighborhood meetings (for Blackland and surrounding neighborhoods), City of Austin events, holiday festivals and much more. McCarver said that more than 250 events will be held at the Conservatory in 2015. Meanwhile, BCDC staff put together a monthly newsletter and distribute it to each and every home on the neighborhood’s 24 blocks.

“We dominate the propaganda,” McCarver jokes. But as gentrification changes both the makeup of the neighborhood and the way its values are disseminated, the consistent presence of the CDC helps keep the “hearts and minds” McCarver describes aligned with their values. And it helps attract new residents to participate in the community. Not all gentrifiers are necessarily harmful.

“Sometimes the folks who are moving in come here because they want to live in a diverse community. I can’t put them all in the ‘bad’ box,” McCarver says. BCDC counts several new, higher income residents as its board members and volunteers, donating their time and money to help the organization succeed.

Keeping a strong board, and making sure that the board reflects the interests of low income residents, is of paramount importance to BCDC. McCarver has learned lessons from other CDCs in Austin, who saw their boards “decimated by the gentrifiers” as upper income residents moved in and took over the neighborhood leadership. BCDC has staggered board elections, with three-year terms for members and no more than three members elected every year, so that a full-scale changeover of the board doesn’t happen and residents can carefully consider who they want representing them. The worst thing that could befall BCDC would be for a new board to vote to sell off some of the organization’s properties for a profit, breaking the 99-year affordability requirement that currently holds on all CDC homes.

In addition to maintaining that affordability, the board tries to make sure the CDC’s work extends into sidewalk construction, bike lanes, traffic circles and other infrastructural improvements that benefit all residents. “We’re not just housing, we’re about the whole damn neighborhood,” McCarver says.

The City of Austin’s Upper Boggy Creek Neighborhood Plan, outlining policies for several East Side communities including Blackland, includes a statement that any developer of four or more units operating in Blackland should designate one quarter of their units as affordable (available at 50 percent of the area median income), or, if they cannot, negotiate a buyout with BCDC. Since the City Council adopted the plan in 2002, BCDC has negotiated with developers three times and engaged in other battles to preserve affordability as well.

“Even if you lose a fight, you still fought,” McCarver says, adding that developers are less likely to confront a community that has demonstrated its organization and willingness to stand up to gentrification.

In two of the three negotiations, developers backed out of the neighborhood when the opposition proved too stiff. The third not only went above and beyond the affordability requirements, designating more than half of the units in an eight-unit complex as affordable, but also gave BCDC the right of first refusal if the apartments ever sold. When they were put up for sale, the CDC purchased them and now operates the entire multifamily complex.

McCarver says that any powerful CDC needs to be a “three-legged stool,” operating with community support, technical and construction expertise and legal backing. “If one of those is missing, you’re in trouble,” he says.

Throughout BCDC’s existence, pro bono work from lawyers, engineers and architects has helped build homes and wrangle with outside developers. And the fights keep coming – each new condo proposal brings with it the potential to dramatically increase the tax burden for current residents, as the whole neighborhood’s property tax burden would be reappraised to include the new development. The spike in property taxes is driving much of the exodus of low income, predominantly minority homeowners from East Austin already; McCarver estimates that around two “heritage” families, or African-Americans who inherited their homes, have left Blackland every year due to property tax increases.

One recent proposal would have single-handedly doubled the property tax bill for 32 Blackland households. Entering into the negotiation process, BCDC got most of the surrounding landowners to disapprove of the project, convincing the City Council not to approve the rezoning the project needed. Instead the land was sold to the University of Texas, a public institution that does not require tax reappraisal. UT initially proposed building tennis courts and other athletic facilities, but after another negotiation with the neighborhood now plans to build graduate student housing with height limits, landscaping features and other amenities the community wanted. “That’s as good as it gets,” McCarver says.

Another potentially damaging proposal has cropped up recently, new condos on Manor Road whose developers refuse to negotiate affordability with the neighborhood. McCarver says BCDC plans to do its thing once again, rallying the support of surrounding residents and raising hell. Eternal vigilance.

Although gentrification has been slow in Blackland, thanks in large part to BCDC’s work, McCarver still recognizes its inevitability. More and more heritage families will sell their homes, and Austin’s housing market (as well as increased costs of permits, new city rules and codes and other regulations that string out the development process) makes it cost-prohibitive for BCDC to buy the properties of those leaving the neighborhood. Vacant lots are hard to find and nearly impossible to afford. In fact, the CDC hasn’t purchased any property in three years. “We just can’t compete,” McCarver says.

But that doesn’t mean BCDC is no longer in the building business. Rather, its priorities have shifted. “You reassess the land you’ve got, and if you can, you densify,” McCarver says.

Recent City of Austin changes to the Accessory Dwelling Unit (ADU) regulations allow for the construction of more units on smaller lots. BCDC had the property where the Fannie Mae Stewart Community Conservancy sits rezoned in order to build new apartments behind the community center; the new ADU rules expanded the number of units they can build from four to eight. McCarver says BCDC is looking at all of their contiguous properties to see if they can be rezoned for multifamily use, and considering if some of the current single-family properties could be better used.

As McCarver notes, increasing multifamily affordable housing does more than just provide more homes for low income families. It also stokes BCDC’s numbers in the fight for hearts and minds. Large “condo regimes,” or the kinds of sprawling, modern condominiums being built throughout East Austin, do not necessarily bring density, as they are often occupied by one or two small families with perhaps an additional unit in back. Low income multifamily developments with several units are likely to house more residents.

Gentrification might be an inevitable trend. But because BCDC’s leases are 99 years long, McCarver notes, for the foreseeable future, “Everybody in this neighborhood is going to be living close to low income people.” After all, despite the radical changes to Austin’s demographics, Blackland’s residents are still mostly African-American and mostly renters.

“And we’re trying our best to keep it that way,” McCarver says.

4 comments on “CDC Spotlight: Fending off gentrification one block at a time in Blackland”