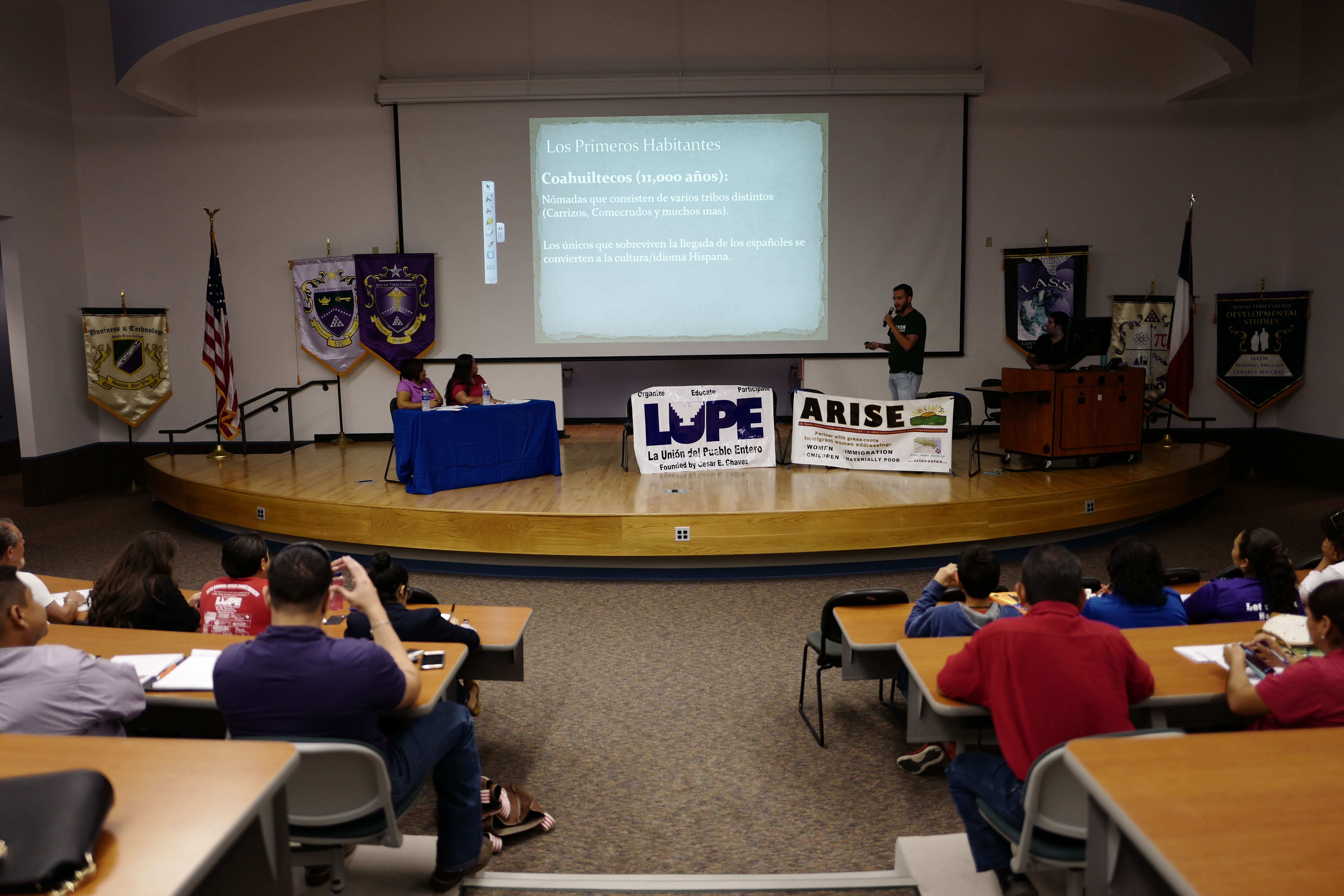 Inequality is stark in the Rio Grande Valley, but for many, its causes remain hidden. In order to overcome the consequences of more than a century of unequal treatment, community leaders and low income residents in the Valley’s colonias must be armed with the knowledge that the struggles they face today – widespread poverty, discrimination, substandard housing and a lack of basic infrastructure – are not coincidences, but are are rooted in historical racism and injustice.

With this vision in mind, we collaborated with our partners at A Resource in Serving Equality (ARISE) and La Unión del Pueblo Entero (LUPE) to begin a series of Pláticas, or community conversations, on the history and legacy behind the Valley’s glaring inequality. Our goal is to provide the context for why things are the way they are, so that participants can reflect on the importance of resistance and the actions necessary to continue on the path toward justice and equality, both personally and as a movement.

The first Plática, titled “Cuando la Nostalgia Duele” (“When Nostalgia Hurts”), was held earlier this month and connected more than 50 community leaders fighting contemporary issues of inequality with local academic Jose Villagran, a Ph.D. candidate at the University of Texas. Villagran’s presentation explained the historical origins of oppression in the Rio Grande Valley and guided a panel discussion on the connection between said oppressions and contemporary problems in the RGV.

You can watch the full event (in Spanish) the video at the bottom of this post, or watch brief clips of the presentation along with reactions from community leaders here (in English and Spanish with English subtitles):

LUPE and ARISE members listened carefully as Villagran examined how throughout the history of the Valley, from the Texas War of Independence in 1836 until the modern day, factors such as race, gender and migration have contributed to a massive underclass of Mexican-Americans predominantly composed of exploited laborers living in subpar conditions. The presentation was thought-provoking and engaged the crowd through introspective personal questions and appealing audio and visual aides such as historical maps, pictures, postcards, indigenous songs, corridos and movie clips.

Community leaders were vocal about sections of the presentation that left a deep impression, including background on how the RGV developed into an agricultural hub mostly off the backs, labor and property of the Mexicans and Tejanos displaced by Anglo farmers with the assistance of the state. Villagran’s straightforward manner of uncovering the “erased” history of the Valley impressed community leaders, many whom were unaware of the information but could draw connections to their ancestors or their personal experiences.

The presentation not only focused on systems of oppression but also highlighted examples of resistance throughout the Valley’s history, using the metaphor of a seed that is buried but reaches through to the surface and blooms. Some of the strongest moments during the discussion of the contemporary issues in the Valley came from grassroots community advocates such as Maria Gomez of LUPE, who gave a brief testimony about her involvement in the United Farm Workers movement. Ms. Gomez passionately described the conditions she and her family suffered, the actions they joined and the victories they won for equality by organizing against farmers who exploited laborers.

Panelist Eva Carranza of ARISE, reflecting on the presentation, described her personal struggles with internalized racism. She stressed the importance of acknowledging the value of our indigenous heritage, and to stop perpetuating practices that devalue others because that only follows in the oppressor’s footsteps. As Eva looked to her daughter in the crowd, she called on her fellow community leaders to not be complacent with the status quo and to remember the importance of what they are fighting for.

We would like to extend our deepest thanks to Villagran, Carranza and her fellow panelist Norma Aldape of LUPE.

The Pláticas will continue: Upcoming events will explore issues of inequality in government, housing and education, including unaccountability and corruption, the lack of public services in colonias, racial deed restrictions and landownership patterns, academic segregation and language division, the status of immigrants and their children and much more. Check back at our website for more information soon.