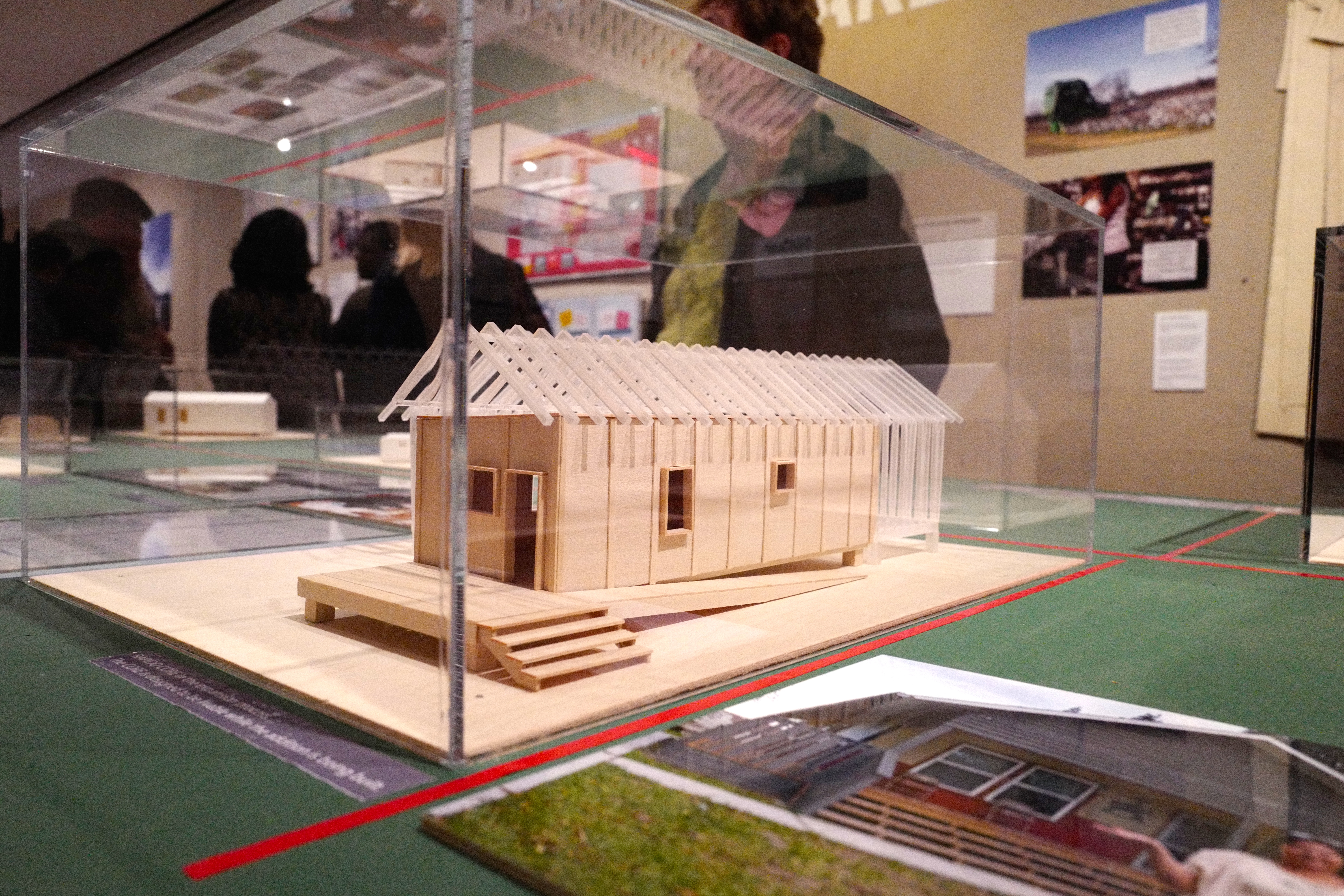 The title of the new exhibit at the Cooper Hewitt, Smithsonian Design Museum in New York City sums up the goal of the RAPIDO disaster recovery housing program: “By the People: Designing a Better America.”

The exhibit opened on September 30 and features socially responsible design models from around the country including RAPIDO, the temporary-to-permanent housing model we have been proud to develop along with our partners at buildingcommunityWORKSHOP [bc], Community Development Corporation of Brownsville (CDCB), the Hazard Reduction and Recovery Center at Texas A&M, La Unión del Pueblo Entero (LUPE) and A Resource In Serving Equality (ARISE) with support from the State of Texas.

Texas Housers co-directors John Henneberger and Karen Paup had the honor of attending the exhibit’s opening night along with Omar Hakeem and Elaine Morales from [bc] and Leo Barrera, Linda Marin, Nick Mitchell-Bennett and Edna Oceguera from CDCB (see the photo slideshow below). The exhibit runs until February 26, 2017 and then travels to other museums around the US.

RAPIDO is a better way to do disaster recovery housing. It allows homes to be rebuilt quickly and at a low cost immediately after a disaster strikes, in contrast to the slow and inefficient way that Texas rebuilds now. It lets families move back into safe and secure shelters on their property in a matter of days after a disaster, thanks to pre-assembled core modules that are easily erected. And it truly is “by the people” – homes are collaboratively designed according to a family’s desires and are then built out around the core in a cost effective manner, creating a much quicker and more equitable path back to housing for the low income households most at risk from disasters. A pilot program supported by the State built 20 housing prototypes for displaced low income Rio Grande Valley families in 2015, providing beautiful new temp-to-perm homes.

In an interview in the Smithsonian’s exhibit book, [bc] founder Brent Brown and LUPE executive director Juanita Valdez-Cox described how RAPIDO helps families rebuild faster, less expensively and in a holistic manner with the community’s input. “[We] tried to make the system of rebuilding actually support the community fabric by aligning with local economies, and an open-source system of construction, allowing families to add and modify their home as needed,” Brown said.

Valdez-Cox added that the RAPIDO process has helped colonia residents in the Rio Grance Valley have a voice in programs affecting their communities. “In all my years at the union we’ve never worked with architects or planners and the allies that we now have. And what we’ve found is that by everybody taking a piece of the problem that we’ve made a lot more progress, and it’s been a better-founded progress in a way that is longer lasting,” she said. “Working with architects and planners…has brought more credibility to the work plans that colonia residents develop. Elected officials take colonia residents more seriously when presenting their work plan because they have been developed with the assistance of experts.”

A proposal to expand on the pilot program, and make the recovery model the standard for many more Texas communities, received broad bipartisan support in the Texas Legislature in 2015 but failed to receive a vote before the crowded end-of-session deadline. The Texas Senate Intergovernmental Relations Committee is currently studying the program as one of its interim charges before the legislature reconvenes next year.