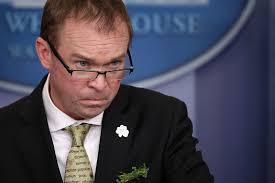 A reporter asked President Trump’s Director of the Office of Management and Budget Mick Mulvaney a question at a press conference at the White House yesterday:

“During the course of the campaign President Trump said, specifically to urban Black voters, he says, ‘What do you have to lose?’ It turns out  what they have to lose is $6 billion that goes to programs that benefit those communities. What do you say to those Americans who feel that promise…”

Before the question was complete Mr. Mulvaney responded, “That nobody’s going to be kicked out of their houses.”

Mr. Mulvaney’s statement is both wrong and confusing.

How do you make massive cuts in the funding for housing programs while asserting, “Nobody’s going to be kicked out of their houses”? Perhaps Mr. Mulvaney is planning on attrition or turnover in the Housing Choice Voucher program to technically prevent evictions. If so, that’s a disingenuous spin on the real effect of the budget cuts. The truth is the cuts will dramatically reduce housing available for the poorest Americans.

In trying to justify elimination of CDBG, Mr. Mulvaney pointed to a large infrastructure proposal the administration is hoping to roll out this summer. He stated that Secretary Carson planned to move the existing funds for infrastructure at HUD into that new infrastructure program.

Mr. Mulvaney says that since the CDBG program doesn’t work, the Administration is going to create a new program and move the CDBG funds into it. But the proposed budget proposes to eliminate all funding for CDBG. There would be no funds to move. Perhaps he was just confused and intended to say that the new infrastructure program would provide funding to replace the funding eliminated from CDBG.

More likely this initiative is not about reform but is just lifted from the calls of the Heritage Foundation over a number of years to simply eliminate the CDBG program and in the government’s commitment for these purposes. I doubt that Mr. Mulvaney has considered this issue carefully. I base that on his obvious misunderstanding of the basic aspects of the CDBG program. In responding to questions regarding CDBG funding directed at the Meals on Wheels program, Mr. Mulvaney deflected the question by stating that “states” had elected to fund that program but that it was not explicitly a CDBG Program..

HUD allocates only a very small proportion of the CDBG funds directly to states. The overwhelming majority of CDBG funds are allocated to local “entitlement jurisdictions.” That is to say, cities and counties with sufficient populations to qualify for direct allocation of the CDBG block grant. I doubt any state makes a decision to fund Meals on Wheels. It’s the local recipient jurisdictions that make the specific decisions as to how CDBG funds will be used within their areas, not states. You would hope an OMB director who studied and understands a program he has decided wasn’t working would know that.

In all of the spin and confusion, the opportunity for real and necessary reform of HUD programs is being lost. There are real problems with the administration of CDBG. Mainly those problems are the creation of past Congresses and administrations, both Republican and Democrat, over the decades.

Congress repeatedly enacted deregulation and devolution of responsibility with regards to the authority that CDBG be targeted to address the needs of the poor, to provide housing and basic infrastructure missing from impoverished neighborhoods of color and not be used to supplant the equitable provision of local tax funds in these neighborhoods.

Mr. Mulvaney cites studies criticizing CDBG as a reason for eliminating the program. But if one reads audits of the program, their findings do not conclude there is not a the lack of need for community development block grant for local governments. The problems are instead: 1) Congressional weakening of statutory requirements over the years of provisions that required the funds to be used to fund housing and infrastructure in poor neighborhoods and; 2) HUD’s failure to enforce the remaining provisions, not repealed by Congress, that provided for the targeting of the CDBG funds to benefit the poor.

These are the types of reforms the CDBG program needs. Instead, what the Administration proposes is simply eliminating it, along with kicking out a great many poor families from their homes.

We need a real and honest examination and reform of several HUD programs. I pray that Secretary Carson means it when he says he intends to do this. But with Mr. Mulvaney spinning out falsehoods, I am coming to doubt that Secretary Carson is going to have the chance. Instead, I think it more likely he presides over the dismantlement and evisceration of our nation’s commitment to decent homes and neighborhoods.

In the lexicon of our president – SAD.