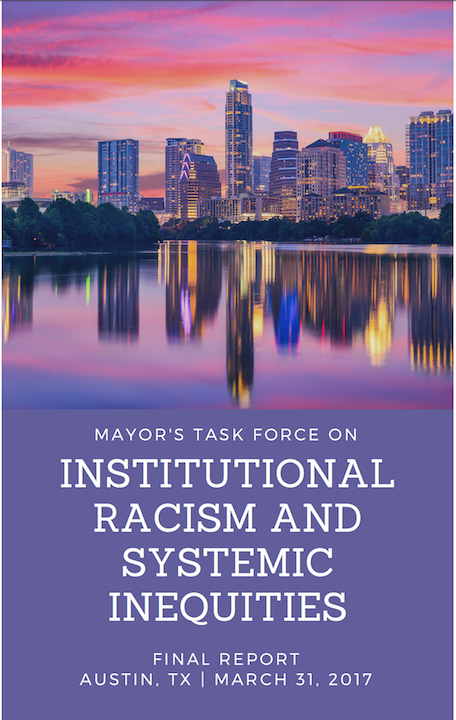 Forty-nine years ago today Dr. Martin Luther King, Jr. was assassinated. Today Austin is proclaiming, in a manner that Dr. King would surely approve, that the imperative of racial integration of neighborhoods is still alive.

Proposing to overcome the city’s legacy of racism and inequality, a mayoral task force of hundreds of Austinites unveiled today a sweeping plan for housing and neighborhood integration.

I served on Austin Mayor Steve Adler’s Task Force on Institutional Racism and Systemic Inequalities. Comprised of roughly 50 neighborhood, business and professional leaders, the housing subcommittee, meeting over many months, found unanimity over the nature and extent of the problem. The task force proposes to aggressively fight to end residential racial segregation in order to make Austin a racially and economically integrated city. The group also proposes to overcome the alarming displacement of people of color from Austin that the subcommittee found stems, in part, from the lack of affordable housing and gentrification.

No Texas city has ever acknowledged the extent of systemic racism in producing today’s racial segregation as Austinites do in this document. Absent a court order or threat of legal action, no broad-based, multi-racial group of leaders has ever called upon a Texas city to take such bold actions to overcome the legacy of racism and segregation in housing. Never before in Texas have real estate professionals, developers, civil rights leaders, neighborhood activists and political leaders spoken with one voice to proclaim racially integrated and inclusive neighborhoods to be a paramount need for the health and well-being of their city.

Recalling public attitudes in Austin 49 years ago at the time of Dr. King’s assassination it is plain to see that he was correct in his prophetic words that, “the arc of the moral universe is long, but it bends toward justice.”

Here are some of the findings and recommendations of the committee.

The Fair Housing Act guarantees everyone, including subsidized housing residents and people of color, the right to freely choose where to live. This includes neighborhoods where poverty rates are lower, new jobs are being created, and schools are high performing. …

…we call upon the City of Austin to not only recognize but also redress racial injustices created and sustained by city policy through creation of a comprehensive program to combat systemic racial inequities in Austin real estate and housing. …

2.3.8. Carry out a regional public information campaign to educate on segregation and fair housing issues.

2.3.9. Establish a program to recognize and reward real estate services companies, landlords, and realtors who voluntarily support and proclaim Austin values of “integration, diversity, and inclusion of everyone” through their business practices and in their properties. Develop a program of city financial incentives to reward these practices.

The City of Austin and its residents must acknowledge the damage being caused by our community’s continued acceptance of residential racial and ethnic segregation. The solution must begin with our community embracing integration and diversity as a core value.

More affordable housing is essential to achieve integration. But additional housing supply alone will not achieve integration. Austin’s extraordinary growth and the desirability of living in historic core neighborhoods undergoing rapid racial transformation means any achievable housing supply in these neighborhoods can be expected to be taken up by growth demands, which are overwhelmingly white. Laws protect all Americans from discrimination based on race or national origin and therefore racial quotas or reservations are not a solution.

There is no simple solution to this problem. But, Austin must start to address the challenge. Here are five initiatives the City of Austin should immediately pursue:

2.6.1. Austin must acknowledge the damage being caused by our community’s continued acceptance of residential racial and ethnic segregation. The solution must begin with our community embracing integration and diversity as a core value.

2.6.2. Campaign to invite Austin area citizens to embrace the values of racial integration, diversity, and inclusion at the individual, neighborhood, and regional levels.

2.6.3. Market housing, both renter and owner-occupied, to people of color in both gentrifying neighborhoods and in traditionally segregated white neighborhoods. Tie together housing, transit, jobs, and schools to result in thriving communities.

2.6.4. Initiatives to support existing lower income residents through affordable and safe ways to access home equity without selling, and for mitigating the impact of increasing property taxes.

2.6.5. Enforce Fair Housing laws, which in Austin today are for all practical purposes ignored. The City must aggressively root out all vestiges of housing discrimination through law enforcement actions based on a widespread program of testing and prosecution using the only effective fair housing enforcement technique—matched pair testing.

2.6.6. Make Austin the national center for “neighborhood integration, diversity, and inclusion” by: 

• Establishing a Joint Center for Urban Integration, Diversity, Inclusion, and Affordability at the University of Texas, Huston-Tillotson University, and St. Edwards University, with an extension program working in Austin’s neighborhoods for students to work with residents to observe, learn, and innovate.

• Supporting Austin neighborhoods to serve as living laboratories for neighborhood and housing equity and inclusion.

Through both legislative advocacy and through the courts, defend Austin’s right to enact policies and ordinances to combat residential segregation and to support “integration, diversity, and inclusion of everyone.” Start by mounting aggressive challenges to State of Texas legislative actions infringing on Austin’s ability to use inclusionary zoning, linkage fees, and prohibition of source of income fair housing protection.

The complete report can be accessed on the City of Austin website and below.